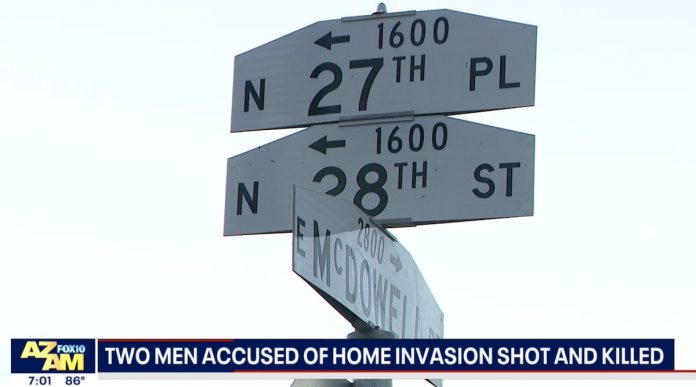 Early Saturday morning at about 7:45 am, a Phoenix, Arizona resident shot two men that were attempting to force their way into the resident’s home.

Phoenix police officers responded to the 911 call and found two injured men lying on the ground in front of a house near 27th Street and McDowell Road with gunshot wounds, Sgt. Philip Krynsky of the Phoenix Police Department told Fox10.

Witnesses told officers that the shooter was a resident of the home.

“Officers developed a plan to move up on foot and carry the men to safety. The officers were able to successfully carry the men to await paramedics,” Sgt. Krynsky said in a press release obtained by the Washington Examiner.

“The officers were able to communicate with the three occupants of the home, and they were detained peacefully,” he continued. “The two men were taken to separate hospitals where they both died from their injuries.”

The men that were shot were identified by authorities as Jairo Perez, 20, and Jose Gutierrez, 24.

The three people that were detained in connection with the shooting gave consistent stories, claiming self-defense. The two men that were shot allegedly forced their way into the home, and were shot by one of the home’s occupants.

In consultation with the Maricopa County Attorney’s Office, the three people that were detained have been released, and charges will be submitted for review.

The story is still developing, stay tuned for updates.