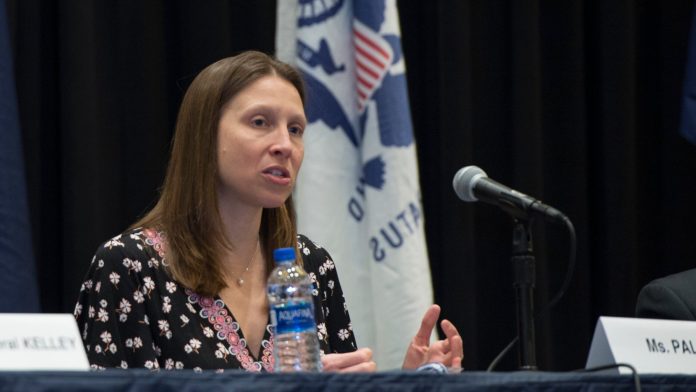 Margaret Palmieri, then the director of Navy Digital Warfare, addresses attendees at the Artificial Intelligence panel during the 2018 Sea-Air-Space Exposition. (US Navy/ Lauren K. Jennings)

WASHINGTON: The creation of a new Artificial Intelligence Governing Council inside the Defense Department is an attempt by Chief Data and Analytics Officer Craig Martell to bring more transparency and a louder voice for key AI stakeholders inside the department, according to a top AI official.

And while the creation of yet another council inside the department would seem to run counter to any goals of streamlining bureaucracy, Margaret Palmieri, the deputy CDAO, says the goal here is to provide a forum for those involved in AI development to have honest discussions — and disagreements — about the way forward.

“So any business that we want to do on behalf of the department, that’s our place to duke it out, to collaborate, to really get the feedback from all the different stakeholders we need in the organization before we bring that to the deputy,” Palmieri said June 28 at a Center for Strategic and International Studies event.

She added the governing council “brings more transparency in all the different efforts across the department and allows our key stakeholders to have a voice at the table as we take on the systemic aspects of this in the department.”

When the CDAO formally stood up June 1, bringing together the Joint Artificial Intelligence Center, Defense Digital Service, Chief Data Office and Office of Advancing Analytics, there were “about 20” different working groups and forums associated with data, analytics and AI, Palmieri said.

RELATED: Say Goodbye To JAIC And DDS, As Offices Cease To Exist As Independent Bodies June 1

The office looked at what those four different organizations were contributing to the department and simplified their associated groups into the new overarching governing council.

David Spirk, the Pentagon’s former CDO, told Breaking Defense that having those disparate groups was overwhelming, and bringing them into one overarching governing council might be what the department needs to get stuff done and eliminate redundancy.

“The JAIC had an executive steering group, but while they had a lot of people show up for it, they weren’t necessarily domain experts with AI expertise,” Spirk said. “And so they were just trying to generate kind of a quorum, that they could begin talking about the big things that they were doing and then setting conditions for multiple working groups and sub working groups. There was just a lot of process that was being built out, but…through a lot of organizations that didn’t really have any expertise to pull it off or understand what they were talking about.”

Running parallel to the JAIC executive steering group were forums through the DDS, multiple Joint All Domain Command and Control sub working groups and councils and then Spirk’s CDO council.

“So it was just this bureaucracy that was built, righteously, but I just don’t think it had the execution arm and the technical experts to fill it out,” Spirk said.

He believes that will change now with the CDAO governing council, adding that there is an additional benefit to how it can focus those groups and topics they’ll be covering.

One particularly important stream of information into the governing council will come from the Responsible AI (RAI) Working Council, which was initially created to ensure department-wide input and coordination on the development of the Pentagon’s RAI Strategy and Implementation (S&I) Pathway, a document which was finally released June 23.

The RAI Working Group will provide reports on progress and potential barriers up to the CDAO governing council, who will then report up to Deputy Defense Secretary Kathleen Hicks, according to the RAI S&I Pathway, which was released June 23.