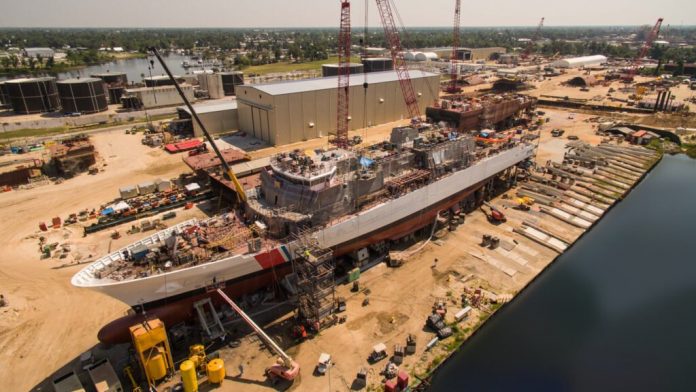 WASHINGTON: The Coast Guard today awarded Austal USA a contract worth up to $3.33 billion to produce up to 11 Heritage-class Offshore Patrol Cutters, with Austal beating out a large field of other shipbuilders, including incumbent Eastern Shipbuilding Group.

“The offshore patrol cutter is absolutely vital to Coast Guard mission excellence as we recapitalize our legacy medium endurance cutters, some of which are more than 50 years old,” Adm. Linda Fagan, commandant of the Coast Guard, said in a statement. “The OPCs are the ships our crews need to protect our national security, maritime safety and economic prosperity. I look forward to the new cutters joining our fleet.”

The Coast Guard plans to buy a total of 25 Heritage-class cutters, which will replace its aging fleet of 29 Famous-class and Reliance-class ships. Eastern Shipbuilding won the initial detail design contract in 2016 and is set to build the first four hulls. Roughly two years after that award, Hurricane Michael made landfall near the company’s Panama City, Fla., facilities, which stirred concerns at the time about how much the brutal disaster might end up interfering with the relatively small, family-owned shipbuilder’s operations on its brand new $10 billion program.

Two years later in March 2020, the service opted to award industry studies contracts to eight shipbuilders in the interest of mitigating “program risk and [to] establish a new, fair and open competitive environment to complete the OPC program of record.”

The federal government does not routinely disclose the names of companies that submit bids but fail to win work, meaning it’s not clear which vendors necessarily went on to compete for the newly awarded contract. However, Defense News reported in November 2021 that Bollinger Shipyards, HII, Austal USA and Eastern Shipbuilding all publicly announced they would submit bids.

The initial award for Austal is valued at $208.26 million and “supports detail design and long lead-time material for the fifth OPC,” with options for production of up to 11 OPCs in total, according to the Coast Guard.

The Offshore Patrol Cutter is one of the two highest acquisition priorities for the Coast Guard alongside the Polar Security Cutter. The new Heritage-class cutters will ultimately become the core of the service’s fleet and tasked with a variety of missions both on the high seas and coastal areas.

In its fiscal 2023 budget request, the service is seeking $650 million for the construction of the fifth cutter and long lead time materials for the sixth. The service is also seeking to decommission one Reliance-class cutter and begin the “temporary disestablishment of [a Famous-class cutter] crew during an extended service life extension project,” according to the service’s budget documents.

In a statement, Joey D’Isernia, president of Eastern Shipbuilding Group, left open the door for a potential protest, saying “We are extremely disappointed in this decision and are evaluating our options.” Expect the Florida delegation to also make noise, with Sen. Marco Rubio, R-Fla., calling the move “short-sighted” in a news release titled “Rubio Blasts Coast Guard for Moving Offshore Patrol Cutter Construction Out of Florida.”

Kimberly Aguillard, a spokesperson for Huntington Ingalls, said in a statement that “Although we are very disappointed in the Offshore Patrol Cutter stage 2 decision, we remain committed to serving the Coast Guard on the National Security Cutters we are currently building, and look forward to opportunities to support this valued customer in the future.”