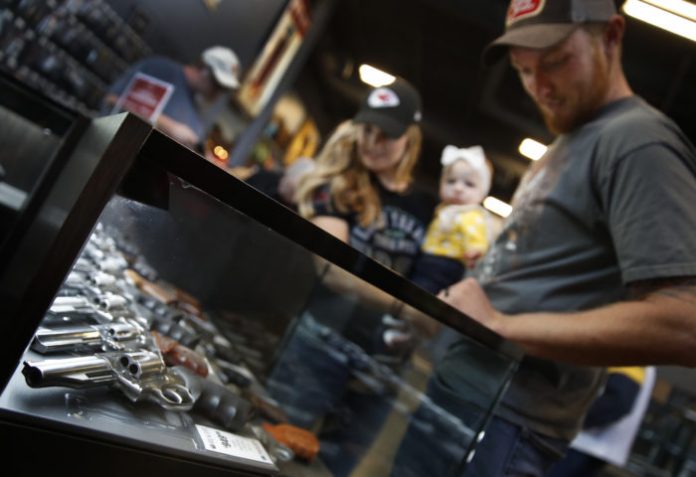 The firearm industry isn’t surprised and the trend is ongoing. Progressive soft-on-crime policies and gun control pushes are leaving Americans feeling unsafe. Millions are making a change and they’re embracing the Second Amendment.

It’s another harbinger of a possible political wipeout for gun control-supporting Democrats who have pushed policies that fail to hold criminals accountable for their crimes yet punish law-abiding Americans. The Associated Press reported on new analysis showing more than 1 million Americans have already joined the Republican Party. The shift is touching all areas of the country.

“It’s more so a rejection of the Left,” Ben Smith of suburban Denver said. Smith added he registered as a Republican earlier in the year in part because he “became increasingly concerned about Democrats’ inability to quell violent crime.”

The AP’s report looked at more than 1.7 million Americans who changed party affiliation in the last year. Two-thirds went to the GOP. Comparatively about 630,000 registered as Democrat. A major problem for the party that pushes gun control and a “defund the police” agenda is that suburban voters, like Smith and others, are concerned about crime and their ability to protect themselves and their families. That includes legally buying a firearm.

The AP report states: “Nowhere is the shift more pronounced — and dangerous for Democrats — than in the suburbs… Over the last year, far more people are switching to the GOP across suburban counties from Denver to Atlanta and Pittsburgh and Cleveland. Republicans also gained ground in counties around medium-size cities such as Harrisburg, Pennsylvania; Raleigh, North Carolina; Augusta, Georgia; and Des Moines, Iowa.”

NSSF retailer surveys and FBI National Instant Criminal Background Check System (NICS) data aligns with that analysis. Background checks for the sale of a firearm have been significantly higher in each state compared to the yearly averages in the years prior to 2020.

In Phoenix, Arizona, Onnie Brow bought her first firearm due to safety concerns for her and her children. She now has a few and the increase in crime had her worried about strangers threatening her home. “It makes me feel more secure,” Brown said about keeping firearms at hand in her home. “I never want to draw a gun on anybody, but I’m glad that it’s available if I ever needed to again.”

The U.S. Supreme Court’s decision striking down New York’s restrictive and subjective “may issue” pistol permit law is the most significant gun rights victory in more than a dozen years. While the decision reinforces the God-given right for law-abiding Americans to possess a firearm for self-defense in and out of the home, Blue-state governors are already scrambling in defeat to see what options are available to re-impose restrictive gun laws.

Mayor Adams’s city has even more restrictive gun control laws than the state at large. The mayor told media, “Listen, let me tell you something: The Supreme Court really made America a very dangerous place, particularly in New York City.” The voters in his city, left hampered by gun control laws and at the whims of dangerous criminals, already give the mayor failing grades on keeping New York City safe and would disagree.

New Jersey’s Democratic Gov. Phil Murphy is following suit. “Let me be clear that, here in New Jersey, we will do everything in our power to protect our residents,” the governor said.

A dark day in America.

This is a dangerous decision from a court hell bent on pushing a radical ideological agenda and infringing on the rights of states to protect our citizens from being gunned down in our streets, schools, and churches.

Across the country in California, Democratic Gov. Gavin Newsom joined the gun control chorus and “raged” at the Supreme Court’s decision. He tweeted, “This is a dangerous decision from a court hell bent on pushing a radical ideological agenda and infringing on the rights of states to protect our citizens. . .”

Partisan pro-gun control elected officials continue to deny reality. Their voters are tired of being left in danger by misguided policies, including ever-increasing gun control and “defund the police” schemes that endanger them and their families.

Overwhelmingly, law-abiding Americans are telling them, “I’ll do it myself.” They’ve made it known by legally purchasing a firearm and as more data reveals, they’re also doing it politically at the ballot box. If elected officials refuse to listen to the will of the voters, they’ll be replaced. NSSF launched the #GUNVOTE campaign to get gun owners registered to vote and to educate them about Second Amendment issues and the policies and record of those running for office. The firearm industry reminds voters when they cast their vote at the polls, “Don’t risk your rights. #GUNVOTE.”

Is Reloading For You? With the Ultimate ReloaderThe Firearm Blog

Pacific powers show unity on Russia, China at NATO meeting: a sign of things to come?