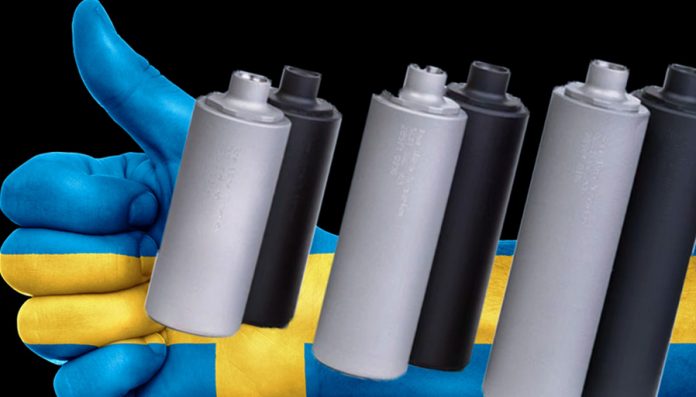 Finland and Norway already have very generous legislation and traditions for suppressors, and today Sweden joins the club. The new legislation means that suppressors should no longer be considered a firearm part and they no longer require a specific license to possess, as long as you have a permit to own the firearm onto which the suppressor fits.

B&T Suppressor on a Ruger. The sight is a Pulsar Proton FXQ30 Thermal clip-on.

“Reliefs in the permit requirement for suppressors will be introduced”

Below: Glock 45 MOS TB (Threaded Barrel) with a 9mm A-Tec suppressor from Norway. To be reviewed as soon as we can pick it up from the store, but we can reveal that we’re quite impressed already. The suppressor must fit the firearm

Anyone who has the right to possess a firearm may possess suppressors that fit that firearm. In practice, this means that the suppressor’s threading or attachment must fit the threading of the firearm, and the exit hole must enable firing with the suppressor mounted on the weapon. I guess, in theory, you could own a .50 BMG suppressor for your .22LR rimfire if there was a way to attach it.

Below: A quick-attach suppressor from Wyssen Defence, made in Switzerland. Below: Ruger Precision Rifle with Pulsar Trail 2 XP50 LRF and Ase Utra suppressor from Finland (top) and Blaser with a similar setup. It would also be illegal to continue to own a suppressor if you sell a firearm, and that suppressor doesn’t fit any of your other firearms. Here it comes in handy to use attachment points like three lugs or other quick attach systems for as many of your firearms as possible.

Otherwise, there are no regulations on how many suppressors you can own or which models or makes. Owning suppressors was legal already in Sweden, but you had to pay about $32 and apply for a firearms permit. The normal processing time from the Swedish Police could be anything from days to several months, depending on workload and other things. Until now, suppressors were more or less only approved for hunting purposes. To get a license for a suppressor for target shooting was practically impossible, even if you had a medical condition with your hearing. To get a permit for a suppressor for a handgun – practically impossible until now when they will be “free” as long as you’re the legal owner of the handgun.

Below: Ruger Precision Rifle in .308 Win with the latest Pulsar Thermion 2 XP50 LRF Pro. If the caliber was 6.5 Creedmoor, you could still use the same suppressor as long as it attaches to the firearm.

Those who already own suppressors don’t have to do anything as long as the suppressor isn’t handed over to someone or scrapped. If you are a collector, association etc. that goes outside the normal you can still apply for a firearm permit to own a suppressor. “Nordic Belt” with a generous view on suppressors

I think it is safe to say that firearms dealers in Sweden will have a busy day today, delivering pre-orders that have been done during the spring. Reportedly, suppressors for .22LR and 9mm are to be the big sellers.

It’s not usual for firearms legislation to go in a more liberal way, but this is a great exception. You could really say that there is a “Nordic belt” with a very generous view on suppressors from Norway, Sweden to Finland.

What do you think about the news and which suppressors would you go for initially?