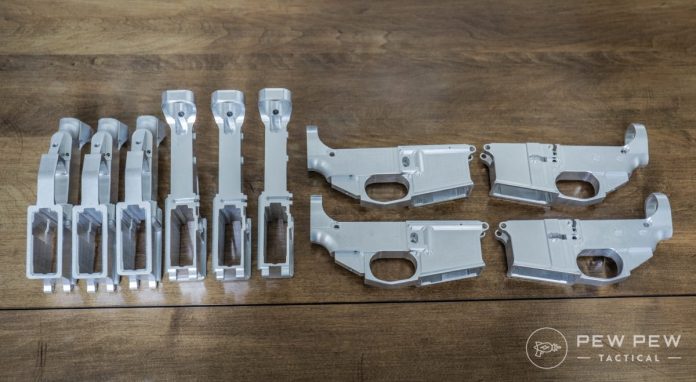 Ghost guns are in the crosshairs of New York officials who filed two lawsuits against a flurry of out-of-state parts makers, including Brownells, Primary Arms, and Rainier Arms, among others.

The first lawsuit was filed by New York’s Attorney General Letitia James, alleging that out-of-state companies are supplying parts for criminals to assemble handguns and rifles, contributing to gun violence.

In all, 10 companies were named in the AG’s lawsuit as defendants:

The lawsuit seeks a “judicial order prohibiting the companies from sending gun parts to New York as well as restitution for the damage caused,” according to the New York Times.

“We’re grappling with a public safety crisis that has claimed far too many lives,” James said at a press conference. “Increasingly, ghost guns are to blame for the destruction.”

The second lawsuit, filed by New York City Mayor Eric Adams and New York City Corporation Counsel Sylvia Hinds-Radix, targets five of the companies with the goal of forcing them to hand over buyer data.

The suits hope to force companies to fork over money that can be used in gun violence prevention programs in the state by using a lawsuit against pharmaceutical companies as a framework.

“We are not going to let gun companies turn New York City into a city of mail-order murder,” Adams said.

Pete Brownell of Brownells told The New York Times that the company “has always taken its compliance obligations very seriously, and we look forward to addressing these claims through the legal system.”

Montana’s High Court swatted down a measure that would allow open or concealed carry on college campuses across the state.

In a unanimous decision, Montana’s Supreme Court determined that House Bill 102 – a measure that would allow the carry of firearms on college campuses — infringed on the authority of higher education officials granted by the state Constitution.

HB 102 was introduced in 2021, quickly passing through committee and the House and Senate. Gov. Greg Gianforte signed the measure on Feb 18.

But the bill was met with backlash as the Montana Board of Regents – the group that oversees higher education in the state – pushed back.

Initially, state lawmakers looked to appease the Board by offering $1 million in funding to help implement the law. That funding, though, was contingent on the Board not raising issues with the law.

However, the Board challenged the bill in court in May.

Justice Laurie McKinnon, in the decision, said the Board of Regents needed to maintain “independent and unfettered academic freedom” from “the growing power of the centralized, bureaucratic state.”

Attorney General Austin Knudsen’s office – a proponent of HB 102 – told the Montana Free Press that his office is “considering our options.”

The parents of a student injured at the Oxford High School shooting in Michigan last year filed a lawsuit against the dealer that sold the gun to the shooter.

Mary and Matthew Mueller, the parents of a teen injured in the school shooting, named Acme Shooting Goods, Oxford Community School District, and school officials in the lawsuit seeking damages and remedies.

The Mueller’s son suffered a gunshot wound to the hand and his face resulting in “long-term damage,” according to the suit.

“We are bringing this suit so that the failures both in the sale of this gun and at our school which allowed this to happen can never happen again. No family or community needs to experience this pain, and no child should have to live with it for the rest of their life.”

Neither Acme nor the school district has commented.

The shooter’s parents have been criminally charged with involuntary manslaughter but have pleaded not guilty.

An online dashboard released by the California Attorney General’s office to increase “transparency” of firearms data has been taken down after the dashboard led to the leak of personal information on concealed carry permit holders within the state.

The dashboard was meant to share information on the number of concealed carry permits and restraining orders within the Golden State but instead leaked personally identifiable information on gun owners.

The leak included the names, ages, and addresses of permit holders across the state. The AG’s office has not released how many permit holders were affected by the leak but said they are investigating.

“This unauthorized release of personal information is unacceptable and falls far short of my expectations for this department,” California AG Rob Bonta said in a statement published in The Wall Street Journal.

“We acknowledge the stress this may cause those individuals whose information was exposed. I am deeply disturbed and angered.”

“The attorney general has put the lives of judges, prosecutors, domestic violence victims and everyday citizens at risk by releasing this sensitive confidential information that gives criminals a map to their homes,” Michel told the WSJ.

The data breach came less than a week after the Supreme Court overturned a New York law on concealed carry permits. California used similar requirements in regards to its own permitting system.