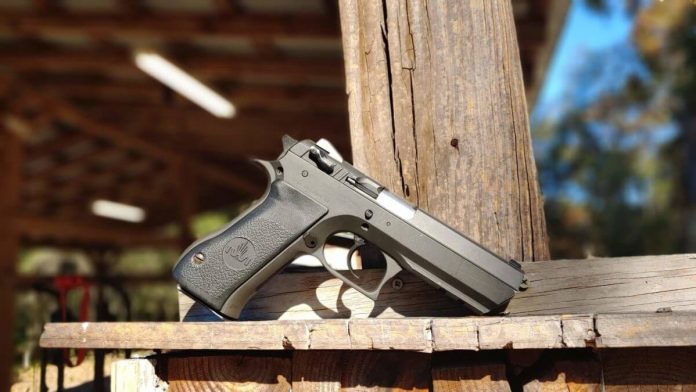 In light of the new and kinda terrible Cowboy Bebop live-action show on Netflix, I got my hands on a Jericho 941 pistol. This isn’t a company loaner but from a friend and fan of Cowboy Bebop, the T.V. show. IWI/IMI and the Jericho have a long and complicated history. It’s interesting for nerds like me but not that interesting for everyone. Part of that history is a variety of names used to import the pistol. For example, IWI marked this pistol Desert Eagle Pistol, and as you can see, this isn’t a magnum caliber semi-auto pistol.

In fact, it’s a DA/SA, metal-framed pistol that is essentially a clone of the famed CZ 75. IWI used the Desert Eagle moniker and very vague resemblance to sell more Jerichos. They also marketed the pistol as the Uzi Eagle and the Baby Desert Eagle. At its heart, all of these pistols are Jericho 941 designs that harken back to Israeli domestic pistol production. IWI used the CZ 75 platform because it’s proven, work well in the desert, and they could subcontract to Tangfolio to produce enough pistols for government contracts.

The all-steel construction of the Jericho makes it a hammer compared to many modern pistols. It’s big, hefty, and unashamed about it. Like the CZ 75 series, the grip features fantastic ergonomics. It curves to meet your hand, and obtaining a nice high grip is easy. The beavertail at the back encourages you to choke up on the gun and get a nice high grip.

Add in a high grip with a low bore axis, and you get a gun that’s easy to control. Like the CZ-75, the Jericho uses slide rails inside the frame. This lowers the barrel and slide significantly and gives you that famed CZ low bore axis. Keeping with the CZ theme, you can use CZ mags in your Jericho. As much as everyone loves Glock mags, the CZ 75 series magazines can be found quite affordably as well. However, extended magazines are a bit tougher to find.

We get a standard 4.4-inch barrel, a weight of 2.3 pounds empty, an overall length of 8.2 inches, and a 16 round magazine for 9mm variants. You can find Jerichos in 40 S&W as well as 45 ACP. The slide-mounted safety on this model doubles as a de-cocker and is ambidextrous. It’s very Beretta 92 like.

Overall the Jericho is a solid pistol, although some find it outdated in a world of plastic fantastic.

Letting Lead Fly With the Jericho

I love the CZ series guns, and the Jericho felt like I was shooting an old friend. The DA/SA trigger provides a very heavy, long, and unimpressive double-action trigger. I don’t want to gripe much because I’ve felt much worse DA triggers, but this particular experience isn’t special in one way or the other. The single-action trigger tells a different story. My finger feels a slight takeup, then the wall, and then boom. No grit, barely any travel beyond the takeup. It’s fantastic and equal to a new production CZ 75. This well-worn model excels with its single-action trigger. A light single-action helps with accuracy but also with speed, and accuracy is paired with speed.

That short and sweet trigger delivers fast follow-up shots that have less of a human error stain to them. This means your shots are less likely to deviate under-speed as long as you remain consistent. From things like the 10-10-10 drill, you’ll find it easier to shoot it clean in well under ten seconds. With the Jericho, my first warm-up run was 7.65 seconds, and after a little practice, I dialed it down to 6.5 seconds on average. Although, this was done entirely in single action.

With the double-action trigger working, the first shot proved tricky. I could pass the drill at the cost of some speed.

From an accuracy perspective, the un excels. It’s a full-sized duty pistol and performs as such. We get polygonal rifling with this model, and that helps in the accuracy department. At fifty yards, I could land 7 out of 10 rounds on a ten-inch gong and 10 out of 10 on a full-sized IPSC target. The standard 3-Dot sights aren’t fancy, but I appreciate that the front sight is rather thin and fine for longer-range shooting.

These sights don’t catch the eye all that fast but do offer plenty of air between the front and rear sights for a fast sight picture. When we mix in speed, the sights appear where you want them, as long as your presentation doesn’t suck. I would swap them for something a little higher viz, but they work fine enough.

I’m a huge fan of the ergonomics and controls. Not only does the gun sit well in hand, but the controls are also remarkably easy to reach and use. This is one of the few guns where my thumbs don’t pin down the slide lock. IWI gives us a massive slide lock that has a nice shelf for easy engagement.

The slide-mounted safety would normally be a downside to me, but it’s surprisingly easy to use. This is due to the small slide side of the Jericho. The safety also acts as wings that make charging the weapon easier, especially with its uber small slide. The magazine release is also placed in such a way to make dropping a mag easy without shifting my grip. My thumb can move from each control with ease in a downward motion.

The Walls of Jericho

The Jericho 941 provides shooters with a very capable clone of the CZ 75 that still differs enough to be a distinctly different pistol. This is a big heavy gun. I’m talking heavy enough to beat a man should you run dry. It doesn’t bode well for concealed carry, but for home defense and duty use, it’s a great choice.

Accuracy, ergonomics, and reliability are all top-notch. Plus, there is something oh so attractive about something different than the millionth striker-fired polymer-framed pistol.

Best 1911 Pistols For the Money

HOT GAT or FUDD CRAP? Is This Magnum 1911 Beautiful or Barbaric?The Firearm Blog