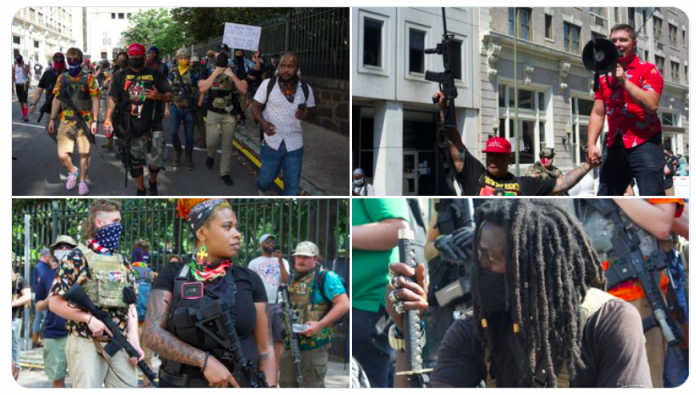 There are a lot of taboos on commercial television, which for instance doesn’t like to show scenes of poverty (unless it’s being chased by police), rarely interviews non-voters, almost never does military contracting fraud stories, and seldom shows results on the ground of American military/drone strikes, even if they’ve already appeared on the airwaves of other countries.

Perhaps the most dependable taboo in American media, however, involves black Second Amendment advocates. As Ford [Fischer] and News2Share have documented over the years, there are many such groups, and they sometimes march in conjunction with groups like the Boogaloo Boys. In fact, the biggest taboo of all might be showing such groups demonstrating together:

Today armed Black Lives Matter and “boogaloo” protesters joined forces for an open carry rally against police violence and government overreach. I’ll have HD video up ASAP, but here are some photos I snapped today.

Whatever your feelings about guns — I personally am not a fan — the psychology of the contrasting coverage of pro-gun demonstrations is fascinating. News audiences are clearly meant to associate white pro-gun protesters with a dangerous and probably organized national race-hatred movement, while black pro-gun protesters either don’t exist or are a fringe movement not worth covering. Under no circumstance must such groups be shown together, even when they organize co-demonstrations.

Today is the anniversary of the Tiananmen Square Massacre, in 1989.

The Survival Tree Every Prepper Should Know