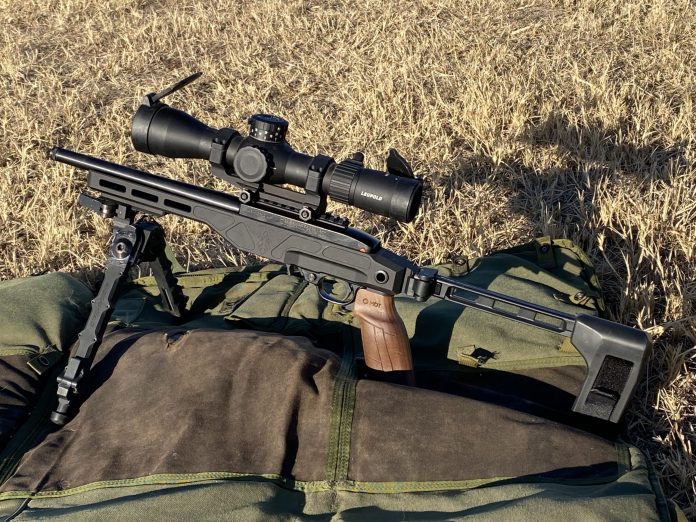 A few weeks ago, I did a review on an off-the-shelf base model Ruger Charger. And my conclusion to that review was as configured, said Charger was not for me. That isn’t a personal attack if you have one and love it, it just didn’t fit any of my needs personally. But today, that changes in a big way! With the base model review out of the way, today we get to turn the dial up to 11. Which is the Charger I really wanted, and it came out better than I would have dreamed!

Before anyone gets mad at me for dumping a million dollars into a Charger, I do want to say two things. First, we were very upfront that you could shortcut a lot of my modifications merely by purchasing Ruger model 4938 instead of Ruger model 4923. The model 4938 already has a Picatinny section on the rear of the grip, which means you can make an equivalent gun with the single purchase of the SB Tactical Picatinny brace. And the Picatinny brace is absolutely the game-changer, no question about it

If you want to spend some coin though, and build the coolest Charger on the block, we have another option. We picked the Deep Six Chassis system from Enoch industries. Enoch makes two chassis for the 10/22, the Odin and the Deep Six. They are both very rigid, being machined from billet 6061-T6 aluminum. This retains a lightweight feel, but is a night and day difference from the plastic factory set up. The Odin is shorter, and has a slightly narrower barrel channel. We chose the Deep Six for a bit more length, as well as the option to add a bull barrel later if desired.

The Deep Six boasts M-Lok slots at the 3,6, and 9, with an open-top. Why? Lights, lasers, flashlights, and bipods. If you are paying $250 for a 10/22 chassis, you probably have that other stuff laying around too. There are left and right QD sling cups built into the chassis, and it fits like a glove. Yes, that is a semi-ridiculous price for a chassis, and nearly matches what we paid for the gun. But it is very, very cool.

For a pistol grip, we opted to try the new MDT Black Walnut wooden one. This was mostly a whim of a choice, it came out and it looked cool. I am, however, a convert now. MDT got the palm swell and shape correct on this, and it feels fantastic. I am also not one to mock plastic, but the walnut feels….. classy. It has the benefits of a modern pistol grip, but it feels like you are holding a real gun. Like an M-14 or an M1 Garand. There is something to be said for the raw feel of a natural product, and this one has grown on me. Overall, it also very much adds to the aesthetic of the Ultra Charger. For either an AR or a Precision gun, I recommend this one. I will be getting at least one more in the near future.

The Deep Six also has Picatinny on the rear of the chassis, as it is a given you will be installing a brace. SB Tactical is choice number one for braces, with a wide variety of designs. Picatinny specifically narrows that somewhat, but it does have other benefits. Like being foldable to reduce the overall length of your pistol. The Picatinny braces are quite popular on Sig firearms, which has helped overall popularity. We chose the FS1913 for clean lines and lightweight.

And that was it. We do have some additional upgrade plans later, but for this run, we wanted to see what just changing the outside meant for improvement. All the internals are still Ruger, as is the barrel. And from opening the package to build complete, we were looking at about 10 minutes. Did this make a performance difference? Yes. Yes, it did.

First of all, for pure accuracy, the improvement was huge. The FS1913 isn’t exactly a precision stock, and the Ruger factory trigger leaves much to be desired. Still, using SK Long Range Match, our new blaster turned in a 3/4ths inch 50-yard group, and a 1.1 right after. That won’t win an NRL match for you but was significantly better than our last outing. I was kind of shocked the very light Ruger factory barrel would do that. I went into this build thinking I would have to swap the barrel nearly immediately. Now, I am thinking it can afford to wait.

Ripping off the absolutely ludicrous Leupold 18x scope we used for accuracy testing, the new Charger started to shine with a red dot. Suppressed and wearing 1x, this Charger was incredibly fun to play with at the range. My kids love it, and after shooting it all afternoon, it was worth every penny. I have built a fair number of 10/22 projects over the years, but this one is by far my favorite. And it doesn’t hurt that it looks like an oversized version of Han Solo’s blaster.