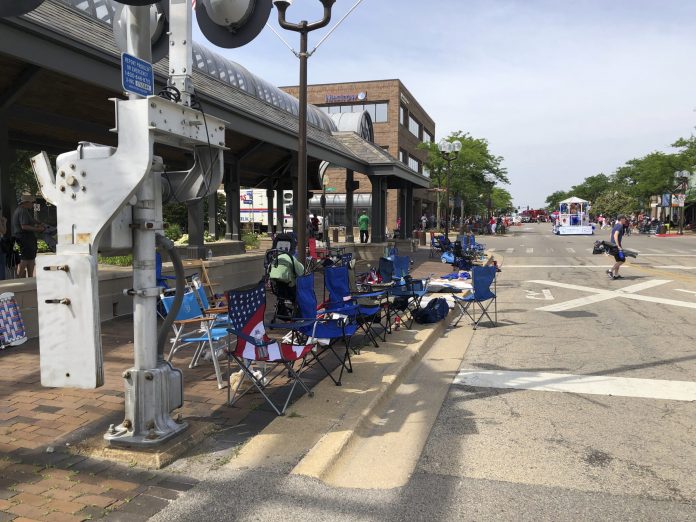 At least six people died and 24 were wounded in a shooting at a July Fourth parade in the Chicago suburb of Highland Park, and officers are searching for a suspect who likely fired on the festivities from a rooftop, police said Monday.

Highland Park Police Commander Chris O’Neill, the incident commander on scene, urged people to shelter in place as authorities search for the suspect, described as a white male wearing a white or blue T-shirt.

Lake County Major Crime Task Force spokesman Christopher Covelli said at a news conference that the gunman apparently opened fire on parade-goers from a rooftop using a rifle that was recovered at the scene. He didn’t know which building.

Covelli said police believe there was only one shooter and warned that he should still be considered armed and dangerous.

Law enforcement give description of suspect in Highland Park parade shooting: Described as 18-20yo white male, longer black hair, slight build. A gun was recovered at the scene: https://t.co/bMCmq8AHHx pic.twitter.com/UL33Qn08Lh

Police have not released any details about the victims or wounded.

The parade began around 10 a.m. but it was suddenly halted about 10 minutes later after shots were fired. Hundreds of parade-goers — some visibly bloodied — fled the parade route, leaving behind chairs, baby strollers, plush toys, bicycles and blankets.

Police told people: “Everybody disperse, please. It is not safe to be here.”

Highland Park Police said in a statement early Monday afternoon that five people had been killed and 19 people were taken to hospitals. but those numbers were revised soon after at the news conference.

Video shot by a Sun-Times journalist after the gunfire rang out shows a band on a float continuing to play as people run past, screaming.

Gina Troiani and her son were lined up with his daycare class ready to walk onto the parade route when she heard a loud sound that she believed was fireworks — until she heard people yell about a shooter.

“We just start running in the opposite direction,” she told The Associated Press.

Her 5-year-old son was riding his bike decorated with red and blue curled ribbons. He and other children in the group held small American flags. The city said on it’s website that the festivities were to include a children’s bike and pet parade.

Troiani said she pushed her son’s bike, running through the neighborhood to get back to their car.

In a video that Troiani shot on her phone, some of the kids are visibly startled at the loud noise and they scramble to the side of the road as a siren wails nearby.

It was just sort of chaos,” she said. “There were people that got separated from their families, looking for them. Others just dropped their wagons, grabbed their kids and started running.”

Illinois Gov. J.B. Pritzker said in a tweet that he is “closely monitoring the situation in Highland Park” and that Illinois State Police are assisting.

Debbie Glickman, a Highland Park resident, said she was on a parade float with coworkers and the group was preparing to turn onto the main route when she saw people running from the area.

She didn’t hear any noises or see anyone who appeared to be injured.

John Rigby & Co. leads from the front on the preservation of gunmaking skills with the launch of the Rigby Academy

“…hands in the work of the house of God, the God of Israel.”