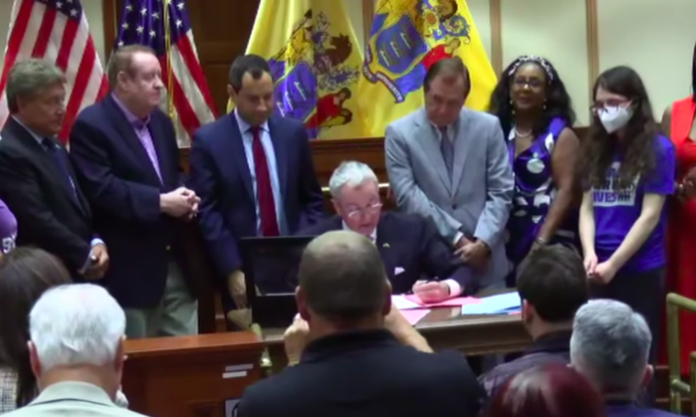 New Jersey Governor Phil Murphy convened many of the state’s political bigwigs and prominent members of the civilian disarmament lobby to sign a slate of new gun control laws he’s calling Gun Safety Package 3.0. And no, these seven bills were in process prior to the Bruen ruling, so the state’s response, which you can bet will be modeled on those of California and New York, is still to come.

Murphy assured the crowd that the bills being signed into law “are common sense, they are smart, they live up to our Jersey values.” Oh. Well, in that case . . .

Today’s slate of bills includes a “public nuisance” law which is the latest tactic being used by deep blue anti-gun states to try to skirt the Protection of Lawful Commerce in Arms Act so their attorneys general can attempt to sue gun manufacturers into bankruptcy.

There’s also a new requirement for background checks on ammunition purchases (along with electronic recordkeeping of ammo sales), a requirement that gun stores sell firearms with microstamping capability once the technology becomes available, and increased penalties for those who break the state’s onerous “ghost gun” laws by daring to build their own firearms. The Garden State is also banning all .50 caliber firearms.

Again, don’t think Murphy and the New Jersey legislators are finished. As he stated,

Not at all. Look for Gun Safety Package 4.0 to address the Bruen decision by putting up new hurdles to lawfully carrying a firearm outside the home.

…We’re not going to just lay down and let our streets, our houses of worship, our supermarkets, shopping malls, sport arenas, bars, or anywhere else to be overrun with hidden guns capable of unleashing a hail of bullets. I look forward to working with the legislature and leadership to address this awful concealed carry decision with strong and smart laws expanding the number of places where firearms cannot be carried and, by the way, saying without any doubt that you cannot bring your gun onto private property without explicit permission to do so.

In the face of the Supreme Court’s tragic and wrong-headed ruling, we need those laws and all of these laws more than ever before.

Somehow, we don’t think this is over. Not by a long shot.

These bastards won’t quit and neither will we.

Defense Business Brief: What a split Congress means for defense spending; Shipyard sells for just $15M; Ukraine says it will rebuild An-225; and more.