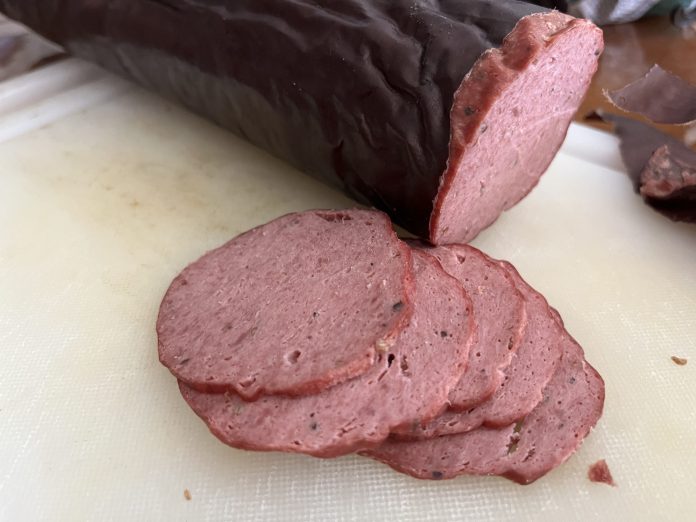 I’ll admit that some animals are more delicious than others, even within the same species. Lots of folks talk about that gamey old buck they killed or that sagey mule deer. I’ve killed one bear that was tender and made the best steaks I’ve ever had, and I killed another bear that was just thick and hard to eat.

This summer sausage recipe is ideal for all those animals whose steaks are less delicious than you’d hoped. You can make as much as you like and store it in the freezer. It makes excellent sandwiches and terrific low-carb meals with cheese. Serve it at the Super Bowl party with cheese and crackers. And it’s a must-have for all your upcoming hunts this year.

These sausages are a terrific way to share game meat with first-timers. It tastes like sausage and doesn’t have any particularly wild flavors. Friends will see that wild meat taste good.

You can use any meat to make this summer sausage.

All you really need is an inexpensive kitchen scale to weigh ingredients, a meat grinder, sausage casings, and access to a smoker.

Prep your meat and fat for grinding. Remove as much silver skin as humanly possible. Cut the meat into cubes or strips to fit into your grinder. Cube the fat. Put both in the freezer for a while until it’s not-quite-frozen because the grinder will work better. Put the hopper and grinder pieces in the freezer, too.

Grind the meat. Start with a coarse grinder plate. As you add the meat, add bits of fat, too, so that the grind looks fairly homogenous with fat and meat.

Mix the spices together in a bowl with a fork so that they are well blended. Sprinkle them evenly throughout the ground. Now mix the meat really well so the spices are blended throughout. You can grind it finer, and you’ll end up with a texture more like bologna as you see in the finished picture above, or you can leave it this coarseness. either way is good, but grinding again is more work.

When you’re finished grinding, add the water and blend it well with the mixture. The water will help the spices and salt to dissolve and penetrate throughout the meat. Once it’s all mixed together, cover with cling wrap and let it sit in the fridge for at least two hours, or even overnight. You’ll note that the meat becomes pinker as it cures.

Clean the grinder and put the grinding pieces back in the freezer with the sausage stuffing plate (the very open plate) and tube loaded and ready to use. You’ll need to soak the sausage casings in warm water for at least 30 minutes before you stuff them.

Now that the meat has cured, you’re ready to stuff it into casings. The casings come tied on one end, and you can cut the excess string off and use it to tie the top once it’s stuffed. Push the casing up over the stuffing tube and feed the meat into the hopper — this is much easier with two people. Try to keep air bubbles out as you fill the casings. Once full, twist the casing tight to squeeze the meat down; it should be firm. Tie them off when full — if you put too much in, just squeeze it out and stuff it in the next one.

Each casing must be perforated to let air bubbles out while cooking. They make sausage pokers, but you can also use corn on the cob spikes, or any small sharp poker. It’s good to make plenty of holes in the casing, like every 3/4 of an inch.

Smoke it! Set the smoker to about 160 F°. You’ll need the internal temperature to reach 160 F° in order to safely eat bear meat or pork. My Camp Chef Woodwind smoker has four meat thermometers built-in, and you’ll definitely need to use one. Your smoker probably has areas that are hotter than others, so rotate the sausages every 45 minutes so they cook evenly.

Leave it at 160 F° for at least two hours, then raise the temperature to 200 F° for two more hours. Finish at 350 F° until the internal temperature is 160 F°, but be careful not to overcook them. Some sausages will probably be done before others.

Set them on cookie racks to cool with a tray underneath to catch grease drippings. You can leave them uncovered in the fridge to dry more and become harder like salami or serve them as is.

Peel back the casing and slice thin to serve and seal in ziplock bags to freeze.

Air Force’s sixth-gen fighter downselect ‘not all that far away,’ says Kendall