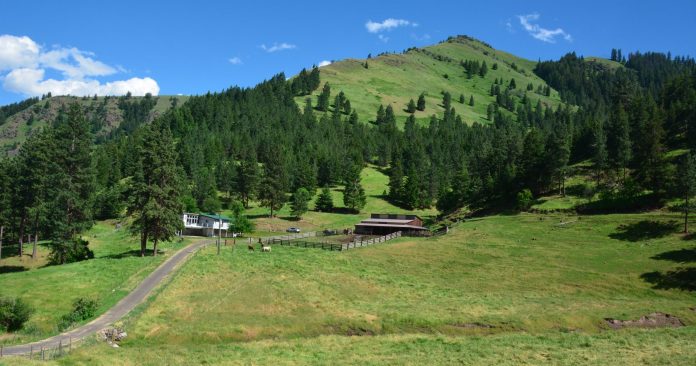 This weekly column features news stories and event announcements from around the American Redoubt region. (Idaho, Montana, eastern Oregon, eastern Washington, and Wyoming.) Much of the region is also more commonly known as The Inland Northwest. We also mention companies of interest to preppers and survivalists that are located in the American Redoubt region. Today, we focus on a ranch retreat property for sale in Idaho.

On a recent vacation trip with Avalanche Lily, I happened across a 93-acre cattle/horse ranch for sale. (Pictured, above.) It is a few miles out of Riggins, Idaho. We drove by this mountainous ranch on the road that takes you up to the spectacular viewpoint of Heaven’s Gate. The sight of this ranch — and the “For Sale” sign — made me pull over to stop and gawk. I said: “Now that looks retreat worthy!”, and Lily nodded in agreement. A proviso: I don’t know either the owner nor the listing agent. But it looks captivating, and it is a likely candidate for a listing at our #1 Son’s website: SurvivalRealty.com.

Here is NPR’s latest hit piece, laden with innuendo, half-truths, and dredged-up unrelated history: Idaho’s fight against the far right, then and now.  JWR’s Comment:  Why is it that almost every mainstream journalist who writes a piece mentioning The American Redoubt movement feels obliged to bring up a small neo-nazi group that hasn’t had any presence in Idaho for more than 20 years? They also regularly and conspicuously omit any mention that The American Redoubt is encouraging conservative Christians and Jews to relocate here. I suppose that doesn’t match their “…a bunch of racists and antisemites…” narrative that they use for their tar-brushing.

A woman in Billings was offered $3000 to change flights.

A new Oregon mining boom could be a bust for sage grouse.

Spokane home values just officially skyrocketed, and not everyone is happy about it.

Shooting victim dies in the hospital, teen suspect behind bars.

Brethren Church in Wenatchee is sold after a rich history spanning 100 years.

The Wyoming primary election will be held on August 16th:  Liz Cheney slammed as a ‘RINO’ during GOP Wyoming debate. JWR’s Comment: Liz Cheney is quite rightfully an endangered RINO. Vote her out!

Video: 10-year-old girl runs from attempted abductor who tried to lure her into van 2 days in a row — police still searching for...