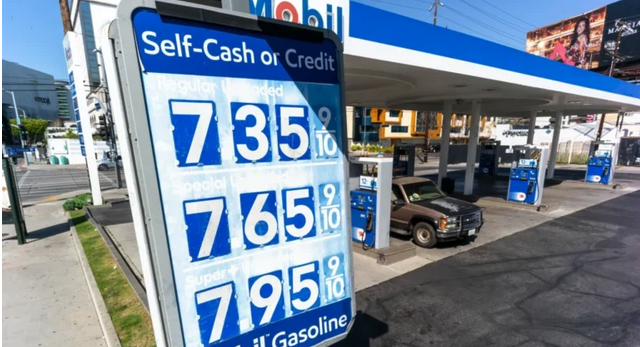 After a single Federal Reserve rate hike of 75 basis points (0.75%) I am noticing a trend among mainstream economists whipping out their crystal balls and predicting an almost immediate reversion to deflationary conditions. In their view, a recession will “balance everything out.” For most of these people, I would suggest that they keep their crystal balls in their pants; they have been consistently wrong and it’s time for them to shut up. If you were predicting that inflation would be “transitory” last year, then you have no right to act like you are an economist today.

It’s going to take a lot more than one semi-aggressive rate hike from the central bank to stop the inflation problem, and when I say “inflation” I am talking about PRICE INFLATION, not the mere increase of the money supply or a bubble in stock markets. There are far too many financial analysts out there that don’t even grasp what true inflation really entails.

There are certain sectors of the economy that will indeed see deflationary pressures. Real GDP, for example, is witnessing declines. Retail sales are in decline. US wages are stagnant in comparison to prices. Housing sales are now falling rapidly. Manufacturing is dropping. Yet, prices continue to remain high. Clearly there is a mix of inflationary and deflationary elements within the same economic crisis. In other words, it’s a stagflation event.

An area in which prices continue to climb without much relent is energy. The mainstream blames this almost entirely on Russia’s conflict with Ukraine and the evolving sanctions against Russian oil and natural gas. However, gas prices were spiking well before Russia ever invaded Ukraine. Inflation in the overall economy hit 40-year highs long before Ukraine became an issue, as Federal Reserve Chairman Jerome Powell finally admitted this past week.

Let’s not pretend like we don’t know the cause of all of this. It is caused by fiat money printing by the Federal Reserve since 2008, and central banks in general are the culprits. The bankers can fund or refuse to fund whatever they wish. Government politicians play their role in creating inflation by ASKING for the money, but it is the Fed that decides if they create the money. The government has zero power to dictate policy to the Fed; as Alan Greenspan once admitted, the Fed answers to no one.

The central bank could print us into oblivion if they wished, and this is essentially what they have done. That said, there are other elements to our current crisis beyond too many dollars. There is also the issue of supply chain disruptions.

I am specifically reminded of the stagflation threat that occurred in 1970s. The oil and stagflation crisis of the late 1970s ran its course right before I was born, so obviously I can’t give a first hand accounting of what it was like, but when I study the events that led up to it I find a lot of similarities to the situation we are facing today. Though, the crisis that is developing right now has the potential to become far worse.

In the early 1970s Richard Nixon, at the request of central bankers, removed the dollar from the last vestiges of the gold standard. Central banks shifted away from gold as the primary trade mechanism between governments and started switching over to Special Drawing Rights; the IMF’s basket currency system. Not surprisingly, the dollar began an immediate spiral and its buying power began to crash. Stagflation became a household concern throughout the 1970s.

This problem was mitigated eventually as the dollar’s world reserve status grew. Basically, we exported many of our dollars overseas for use in global trade, and by extension we also exported a lot of our inflation/stagflation. As long as the dollar remained the premier reserve currency, most of the consequences of central bank fiat printing would not be felt by the general populace. In terms of gasoline, the dollar has been the petro-currency for decades which allowed us to keep prices in the US lower than in many countries.

But things are changing. The dollar’s portion of global trade has been in decline for the past several years, and the Fed just keeps creating more greenbacks from nothing. In 2020 alone, the Fed conjured $6 trillion to fuel the covid stimulus response, pumping all that money directly into the system through covid checks and PPP loans. In order for this process to continue, the dollar’s global percentage of trade would have to keep growing in order to export US inflation overseas. This is not happening. The dollar’s percentage of global trade is in reversion.

We are dealing with the end of a cycle that started in the 1970s. We are going back to the beginning.

Furthermore, the gas crisis in the late 70s and early 80s was also driven by the Iranian revolution and the removal of Iranian oil supplies from the global market. This created a loss of around 7% of total oil from markets, but it resulted in gas prices exploding from 65 cents in 1978 to $1.35 in 1981. Prices more than doubled in the span of three years and never went back to where they were before the crisis.

As in the late 1970s, we also have a supply chain issue with an OPEC nation. The Russian portion of the global oil production was around 10% in 2020, but the nation is the 2nd largest oil exporter in the world. Only 3% of oil imported into the US comes from Russia, but Europe relies on Russia for around 25% of its total oil consumption.

The EU now supposedly cutting off that supply of oil, though there are questions surrounding loopholes and how much Russian oil is actually still being supplied to European nations. As sanctions continue, the EU will have to go to other exporters to get what they need and this is reducing the amount of supply available to western countries. The Russians have simply adapted, and are now selling more oil as a discount to major eastern markets like China and India. But for the rest of us, Europe’s thirst for oil is going to continue to cause price expansion as supplies falter.

So where does this leave us? Our situation is similar to the gas crisis of the late 1970s because we have ongoing stagflation, a weakening currency as well as a major economic conflict with an OPEC producer. That said, things are measurably worse than the 1970s for a few reasons, notably the fact that our country is in far more debt, foreign treasury and dollar holdings are in decline, and the conflict with Russia is far more egregious than our troubles with Iran in the 70s.

I suspect we will see at least a 300% markup in gas prices from pre-pandemic lows, which were around $2.60 per gallon for regular. Meaning, prices will continue to climb over the course of this year and level out around $7.50 per gallon by the second quarter of 2023. I am basing the pace of the price increases according to the pace that occurred from 1979-1981.

Obviously, there will be market dips and pauses, but it is unlikely we will see prices at the pump fall dramatically anytime soon. There will be endless predictions in the mainstream media about when inflation will stop and many pundits will claim that the Fed will capitulate soon on rate hikes. All this clamor will affect oil markets to a point, but prices will continue to rise regardless.

Some people will argue that declining demand will stop rising prices, however, the stagflation problem does not only revolve around demand, there are many other factors at play. Unless we see a drop in demand similar to what we saw at the beginning of the pandemic lockdowns, there is little chance there will be a meaningful reversal.

Also, for anyone hoping that US shale or OPEC will pick up the slack from Russia, this is not going to happen. Oil industry experts have already noted that because of inflation and lack of manpower there will not be a major uptick in oil pumping and so shortages will continue for some time.

What does this mean for the wider economy? Inflation in necessities like gasmuch means an implosion in retail. People will divert funds away from other purchases to cover gas and energy costs. Expensive gas also means expensive freight rates, which means higher prices for everything else on the store shelves. Expensive gas will also cause smaller freight companies to go bankrupt or close up shop, along with much higher interest rates being instituted by the Fed. My own grandfather lost his trucking and freight company in the 1970s for this exact reason.

In turn, less freight means less supply, which in turn means higher prices on everything. It’s a terrible cycle. The point is, you should expect gas prices to remain very high (into the $7 per gallon range) over the course of the next year, and this will affect EVERYTHING else in terms of your pocketbook and your life. Don’t put too much stock in the people claiming deflation is on the way; not in prices of necessities it’s not.

Eventually, lack of demand will slow price increases but not until we are much higher than the current national average of $5 a gallon. And, if you live in a state with high gas taxes like California, then be prepared for double digit costs at the pump.

Brandon Smith is the Editor of Alt-Market.us and The Wild Bunch Dispatch. Both publications are highly recommended by JWR.