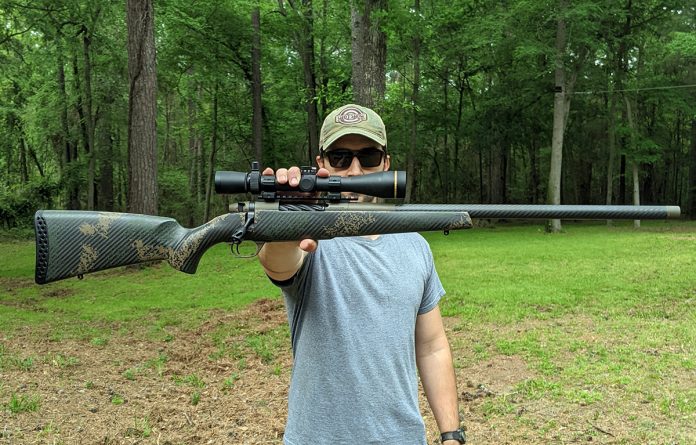 One of my childhood friends was a Boy Scout, and when we were both in high school, he took me on my first backpacking trip in the Appalachian Mountains of Virginia. As we prepared for the two-day hike up and down a mountain, he warned me: “Try to cut as much weight as you can. Every little bit helps.”

Ignoring this sensible advice, I stuffed as much needless—and needlessly heavy—gear into my pack as I could fit. You can see where this is going. By the time we reached the summit of our trip, I was hurting… bad.

If you’ve spent any time in the mountains, even the relatively tame mountains of the eastern U.S., you know that every ounce you cut at the trailhead is one less ounce you’re lugging up and down a hill. For hunters who must also think about packing out game, it’s even more important to save weight wherever you can.

Enter the Weatherby Mark V Backcountry 2.0. One of the lightest rifles in Weatherby’s lineup, this bolt-action affair clocks in at as little as 4.7 pounds, depending on the configuration. The model I received featured a carbon fiber barrel and stock and even weighed down with a rail, a scope, and four rounds of 6.5 Creedmoor, only tipped the scales at 6.75 pounds.

Oh, and it’s dead-nuts accurate, which also happens to be important on a big mountain hunt.

If you’re looking to save weight, the Ti models are the way to go. That configuration weighs as little as 4.7 pounds, depending on the chambering. It’s somewhat counterintuitive, but the base model (5.2 pounds) is actually lighter than the Carbon model (5.8 pounds).

All rifles are available in a variety of Weatherby Magnum cartridges as well as 6.5 Creedmoor. The standard Backcountry 2.0 and the Ti models are also available in .308 Win.

You can find these rifles for less on GunsAmerica, but that’s still a lot of cheddar for a bolt-action rifle. What are you getting for a $2,500 production gun?

Quite a bit, actually. Weatherby pulled out all the stops to make the Backcountry 2.0 as light as possible, and one of the coolest features is the Peak 44 Blacktooth carbon fiber stock. Retailing at $649, the 20-ounce Blacktooth is the lightest production carbon fiber stock on the market.

The stock cuts weight by using a slip of carbon fiber to engage the front recoil lug in place of a larger and heavier aluminum bedding block. That piece of carbon fiber transfers the force generated by recoil directly to the exterior shell, and a pair of aluminum pillars secure the action in place. That bedding technique also allows Peak 44 to use lighter fill materials than other stocks.

Moving from the stock to the action, the 54-degree bolt throw is the shortest in the industry and allows for lightning-quick follow-up shots. The bolt knob is removable, and the deeply fluted bolt trims weight and keeps the action buttery smooth. And, of course, the six-lug Mark V action is legendary for accuracy and durability.

Once you’ve closed the bolt and are ready to fire, the trigger won’t be the reason you miss the shot. We’ve come to expect excellent triggers from even budget-level bolt-action rifles, and the Backcountry 2.0 is no exception. The Triggertech trigger is clean and crisp, and the stainless-steel precision cut components won’t rust or corrode. The trigger clocked in at 3.5 pounds on the model I received, but it’s externally user-adjustable from 2.5-5.0 pounds.

The Backcountry 2.0 is available with a variety of lightweight barrels, but I’ll focus on the one I tested. The core of this barrel is stainless-steel and match-grade, and it’s wrapped in a carbon fiber sleeve and loaded under tension. Ninety-five percent of the carbon fiber does not touch the barrel, which allows air to foil around the steel and cool it down quickly.

The rifle is obviously well-made and loaded with features, but I could take or leave the titanium muzzle brake. It looks cool, but I’ve never found muzzle brakes to be particularly effective in these applications. You might feel a difference shooting rapid bursts, but on hunting rifles, I don’t get the point. Muzzle brakes just make the gun more annoying at the range and louder in the field. The good news is that Weatherby also includes a simple thread protector, which you can use if you don’t swap it out for a suppressor (more on that below).

You can read about all the features of the gun used in this review here.

You’d expect an impressive list of features on a $2K+ rifle. The real question is: how does it shoot?

All Backcountry 2.0 rifles come with Weatherby’s Sub-MOA Guarantee. Using premium factory ammunition, all four configurations should shoot a 3-shot group of .99” or less at 100 yards. Weatherby also claims that their carbon fiber barrel posted an internal Weatherby accuracy record of 0.06” at 100 yards in a three-shot group.

My results weren’t quite that good, but they were still excellent.

I shot a variety of Hornady ammunition, all of which posted sub-MOA groups. But the rifle really seemed to like these 143-grain Precision Hunter loads from Hornady. Every single four-shot group clocked in under 1 inch, and one group landed at 0.44 inches.

All groups were shot from 100 yards on sandbags.

I figured the Backcountry 2.0 would be accurate, but I was curious how it would handle the recoil. Lightweight rifles are great for carrying up mountains but not so great for absorbing the recoil impulse. Because physics; heavier rifles are often more comfortable to shoot while lighter rifles often result in bruised shoulders and a bad flinch.

With game in the crosshairs on a once-in-a-lifetime hunt, flinching is just about the last thing you want to do.

Fortunately, the folks at Peak 44 have you covered. Their Blacktooth stock comes with a 3DHEX recoil pad, which, they say, reduces felt recoil by spreading out the impulse over a greater period of time. The honeycomb pattern of collapsible voids draws out the time component of recoil and makes “even the hottest cartridges” “surprisingly pleasant” to shoot.

I don’t know if I’d go that far. The 6.5 Creedmoor is a relatively tame big-game cartridge, but I could still feel it in the ol’ shoulder. The recoil pad makes a difference—there’s no denying that. The gun was more comfortable than other lightweight guns I’ve shot in the same caliber. But don’t expect it to turn a .300 Weatherby Magnum into a kitten.

That’s your suppressor’s job. With Dead Air’s Nomad-L affixed to the end of the Backcountry 2.0, I could shoot it all day. The overall setup was probably too long to bring on a hunt, and the all-steel Nomad-L eliminated some of the gun’s weight savings. But with a slightly shorter, titanium suppressor, the Backcountry 2.0 might indeed be the ultimate mountain rifle.

I’m cognizant of the fact that not everyone will appreciate the Backcountry 2.0’s price point. While I know plenty of folks are comfortable dropping thousands on high-quality firearms, I’ve only rarely been in the market for a gun of this caliber.

Here’s what I would say to that perfectly reasonable concern. If you’re a backcountry hunter or aspire to be one, this rifle checks all the right boxes. It’s ultra-lightweight, super accurate, and uses the bleeding edge of rifle technologies and innovations. Also, because it’s designed and manufactured by Weatherby, you know that it’ll outlast you. If it doesn’t, Weatherby’s customer service is great, and they always stand by their products.

In other words, the Backcountry 2.0 is an investment. It may not accrue value (though I suppose it might), but it’ll serve you well for decades to come even while traversing the most difficult terrain on earth. For me, that guarantee is worth quite a bit more than the cost of this rifle.

About the author:
Jordan Michaels has been reviewing firearm-related products for over six years and enjoying them for much longer. With family in Canada, he’s seen first hand how quickly the right to self-defense can be stripped from law-abiding citizens. He escaped that statist paradise at a young age, married a sixth-generation Texan, and currently lives in Tyler. Got a hot tip? Send him an email at [email protected]

Here Is the Counterdrone Kit the US Is Sending Ukraine

Shoot Like A Girl® Announces New Partnership with Volquartsen Firearms