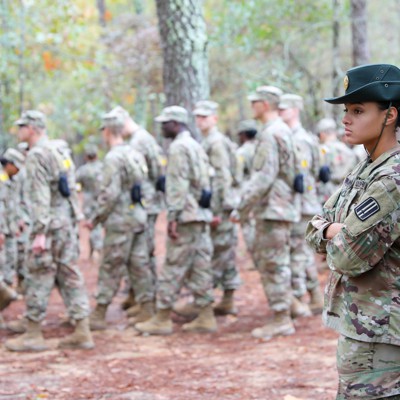 Army recruits need to have a high school diploma after all. Some of them, at least.

After briefly signaling they would waive the minimum education requirement for “a limited number” of recruits, Army leaders have reversed course and reinstated the need for a high school diploma or GED, an Army spokesman said Tuesday.

The service on June 23 began allowing people to enlist in the regular Army without a high school diploma or GED, as long as they scored 50 or higher on the military’s entrance test, called the Armed Services Vocational Aptitude Battery, or ASVAB, and met all the other standard enlistment criteria, said a spokesman for U.S. Army Recruiting Command, which posted additional details in a press release. The service said it wanted to consider candidates who may have a reason for not completing their education, such as “caring for a terminally ill family member.”

The change was short-lived. Army officials reinstated the education requirement one week later. The reversal was first reported by Military.com, citing an internal memo. On Tuesday, Army spokesman Matt Leonard confirmed that the policy change was suspended, but could not provide any additional information.

The Army, which is the U.S. military’s largest service branch, is struggling to attract qualified candidates at a rate that has alarmed top generals. According to Defense Department data, only 23 percent of 17- to 24-year-old Americans are eligible to enlist without a waiver of some kind, down from 29 percent in recent years, an Army spokesman said in an email. Only 9 percent of those are willing to join the military, the lowest share in 15 years.

In March, Army Chief of Staff Gen. James McConville said recruiting challenges were behind the reduction in the Army’s maximum number of soldiers Congress authorizes it to keep, a figure known as “end strength,” in the fiscal 2023 budget request. Last year he told Congress the service needed to grow, but he said he now is focused on meeting standards.

“We’re in a war for talent and the secretary [of the Army] and I want to have a high quality Army. To me, quality is more important than quantity,” McConville said during a meeting with reporters.

Dropping the high school diploma requirement for some recruits was just the most recent attempt by Army leaders to increase recruiting numbers, said Thomas Spoehr, a retired Army lieutenant general and director of the Center for National Defense at The Heritage Foundation. The Army has already changed its tattoo policy, reduced some minimum contract lengths, and increased bonuses, he said. Last month, one bonus was bumped up from $25,000 to $35,000 for going to basic training within 45 days after signing a four-year contract, according to a press release.

“I mean this is almost like the last thing they had to try and change, in order to try and change the trajectory of their 2022 recruiting program. So, not surprised to see them try this,” he said.

Attaining a GED or high school diploma isn’t so much about a recruit’s education as much as it is used as a reliable predictor of whether they will complete their initial enlistment, Spoehr said, which means without this milestone in a recruit’s background, the Army would only have been trading one problem for another.

“That gets you more people in the front end, but then you lose them—you will lose a higher percentage due to attrition. And attrition is already a pretty significant factor in the Army,” he said.

A 2020 RAND study found that the Army had the highest attrition rate among the military services at 29.7 percent after the first 36 months of service.

Spoehr is glad for the Army’s reversal, which he believes happened because of the amount of public comment and ridicule they received. He doubts they would have recruited a significant amount of eligible people.

So far, Pentagon officials have not publicly detailed why they believe recruitment is so rapidly plummeting. Over the past 20 years since the start of the post-9/11 wars, the Army has tried a variety of gimmicks and bonuses to reach its end strength goal. Historically, military recruitment tends to rise when jobs and the economy are down. But other factors such as race, economic status, the likelihood of combat danger, the rise of the private tech job sector, politics, and the reemergence to post-pandemic life have all challenged recruiters. During the height of the unpopular Iraq War, recruitment was falling so fast, especially among some minority groups, that Army recruiters lowered required ASVAB scores and allowed waivers for some recruits with low scores or other demerits, including minor criminal offenses. “In 2006, nearly one in five incoming soldiers did not have high school diplomas,” the Boston Globe reported in 2007.

An Army Recruiting Command fact sheet reviewing fiscal 2021 statistics described the current environment is the “most challenging labor market since the inception of the all-volunteer force,” which was created after the Vietnam War. About 71 percent of youth in America do not qualify for U.S. military service for several reasons, including obesity, misconduct, and aptitude. In fiscal year 2021, 94.2 percent of regular Army recruits had a high school diploma, with the remainder having a GED or state equivalent. About 62.2 percent scored above 50 on the ASVAB, just barely meeting the Defense Department’s requirement that at least 60 percent of the Army’s recruits do so.

Additionally, the Army has already kicked out more than 1,000 active duty soldiers for refusing the COVID-19 vaccine, and tens of thousands of unvaccinated Reserve and National Guard members will not be able to participate in drills or training after not meeting the vaccination deadline at the end of June.

So far this year the Army has achieved almost 40 percent of its enlisted recruiting goal for fiscal year 2022, the Army spokesman said in an email, without providing specifics about what that goal is. Most of the service’s recruiting goals are met within the fourth quarter of the year, he said, after high school graduations have passed.

“Everyone I talk to says that 2023 is gonna be worse still, and on and on,” Spoehr said. “So there’s no, like, pot of gold at the end of this rainbow. They’re gonna have to adapt their methods in order to survive.”