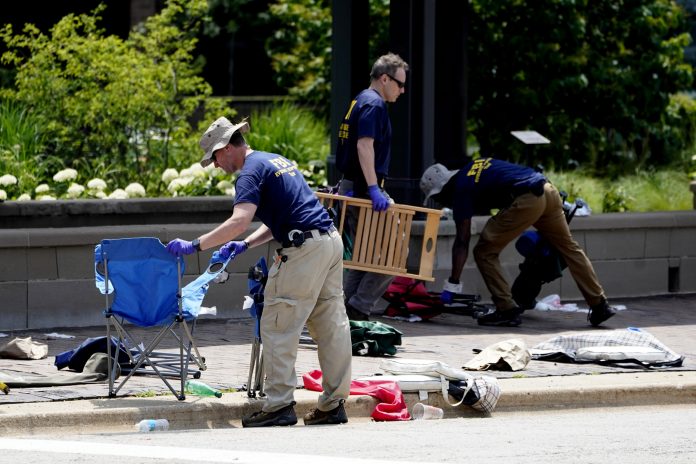 How many times have we heard this storyline before? A troubled, clearly unstable male who  had had a number of previous run-ins with law enforcement bought firearms legally that he later used to murder a large number of people. And it doesn’t seem to matter how many gun control laws are in place or background checks are required or whether a red flag law is on the books.

[Highland Park shooting suspect Robert] Crimo legally purchased the rifle used in the attack in Illinois within the past year, Covelli said. In all, police said, he purchased five firearms, which were recovered by officers at his father’s home.

The revelation about his gun purchases is just the latest example of young men who were able to obtain guns and carry out massacres in recent months despite glaring warning signs about their mental health and inclination to violence.

Illinois state police, who issue gun owners’ licenses, said Crimo applied for a license in December 2019, when he was 19. His father sponsored his application.

At the time “there was insufficient basis to establish a clear and present danger” and deny the application, state police said in a statement.

According to Illinois police, it appears that Robert Crimo was able to legally purchase guns after having his knives taken away in 2019 because he didn’t have a FOID card to review or revoke AT THAT TIME. pic.twitter.com/AssesnZwAt

Illinois has no shortage of laws governing who can own a firearm and methods for ostensibly keeping them out of the hands of allegedly dangerous people. Yet as we’ve seen time and again, those…laws…do…not…work.

Under Illinois law, gun purchases can be denied to people convicted of felonies, addicted to narcotics or those deemed capable of harming themselves or others. That last provision might have stopped a suicidal Crimo from getting a weapon.

But under the law, who that provision applies to must be decided by “a court, board, commission or other legal authority.”

The state has a so-called red flag law designed to stop dangerous people before they kill, but it requires family members, relatives, roommates or police to ask a judge to order guns seized.

People who are determined to commit horrible crimes can always skirt the system, either legally acquiring firearms as the Highland Park shooter did or by buying them illegally. Bloviation and histrionics by politicians and the gun control industry are meant to deceive the public into thinking that if we just pass more “gun safety” laws, what happened in Highland Park can be prevented.

That’s a cynical lie and they know it. It’s all an elaborate system of security theater meant to fool the public and make it harder for the average citizen to defend him- or herself from the kind of threats they’re most likely to encounter. And the web of gun control laws are administered by government functionaries on the public payroll who operate in a vast bureaucracy, sometimes with political agendas.

Between Illinois and the city of Highland Park, all of the gun control laws that the Civilian Disarmament Industrial Complex calls for most often were already in place; gun owner registration, no sales under 21, a three-day waiting period, red flag confiscation orders, and, yes, even an “assault weapons” ban.

How well did that work out?

A Vehicle to Help Adjust Your Thinking. Lessons learned in operating a camping trailer.