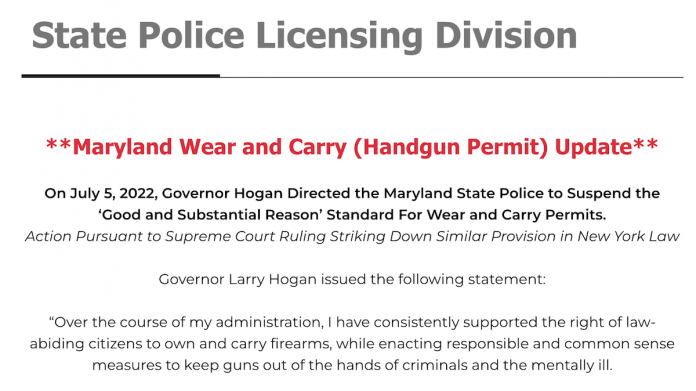 Maryland’s requirement that concealed carry applicants must provide to the state a “good and substantial reason” to bear arms in public is gone.

Gov. Larry Hogan on Tuesday told state police that, in light of the Supreme Court’s recent decision striking down New York’s similarly restrictive requirement for handgun permits, they could no longer enforce it.

“Last month, the U.S. Supreme Court struck down a provision in New York law pertaining to handgun permitting that is virtually indistinguishable from Maryland law,” said the governor in a statement posted on the state government’s website.

“In light of the ruling and to ensure compliance with the Constitution, I am directing the Maryland State Police to immediately suspend utilization of the ‘good and substantial reason’ standard when reviewing applications for wear and carry permits,” he continued.

“It would be unconstitutional to continue enforcing this provision in state law. There is no impact on other permitting requirements and protocols,” said Gov. Hogan.

Maryland State Police said in a statement that its Licensing Division will update the online portal to accord with the governor’s directive.

The NRA-ILA chalked this up as another win for gun owners.

“For far too long, Maryland has prevented the majority of law-abiding citizens from exercising this fundamental right. This persisted as other states went shall-issue over the decades, and even as constitutional carry has reached 25 states in recent years,” said the organization in a statement.

“Now, MSP cannot arbitrarily deny permits to applicants who meet all objective criteria. As a result, more law-abiding citizens will be able to exercise their right-to-carry to defend themselves and their loved ones. The criminals, who have gotten used to menacing the public with impunity, will find fewer and fewer defenseless victims,” it continued.

However, NRA-ILA was quick to note that the work’s not done in Maryland as politicians there still work, by and large, to chill the 2A rights of residents.

“Maryland’s permit process is still plagued by the onerous requirements and a high processing time that far exceeds those of neighboring Virginia, West Virginia, and Pennsylvania. This will still prevent many Marylanders of limited economic means from acquiring a permit. It is critical that gun owners and Second Amendment supporters remain vigilant going into the election season, and beyond, to make this right more accessible,” said NRA-ILA.

The Supreme Court’s landmark ruling in the case known as, NYSRPA v Bruen case, may continue to pay dividends for 2A advocates in Maryland.  Already, other key decisions on gun rights have been vacated by the high court and remanded back to the lower courts for review in the light of the Bruen decision, as GunsAmerica previously reported.