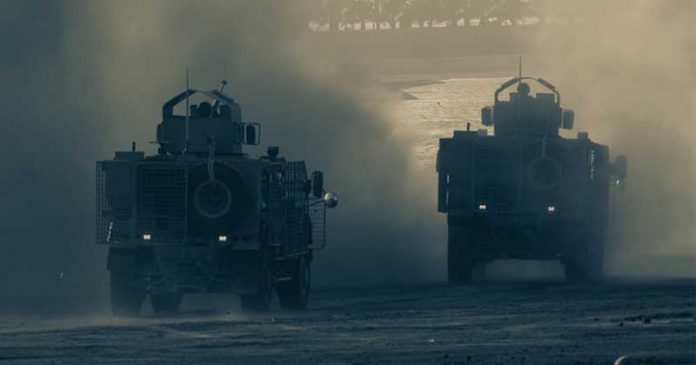 Note: True martial law has not occurred in the USA or Canada in recent history. Thus, these safe places to be during martial law were chosen based on what happened in other countries which recently (or currently) have martial law in place. These countries include Egypt, Armenia, Philippines, Myanmar, and Venezuela.

Each case is different, so the safest place to be during martial law can vary drastically. What’s important is that you start thinking critically and take steps to prepare.

1. Hunkered Down in Your Own Home

What many people don’t realize about martial law is that, unless you are a dissenter against the regime, life mostly continues as usual.

Yes, there will probably be curfews, shortages, and maybe violent conflicts in populated areas.

But people still go to work and even socialize with friends during martial law. Because of this, the safest place to be during martial law is in your own home or the home of a family member who lives away from high-conflict areas.

Be Prepared to Stay Inside Your Home

Of course, life doesn’t always continue as “normal” under martial law. In the Philippines, under the Marcos regime, regular people would be taken off the street, jailed, and forced to do hard labor for something like having too-long hair.

This is why you’d need to stay hunkered down inside your home and go outside as little as possible.

But, to stay inside your home, you must have all the supplies you’d need to survive. That means a large stockpile of food, medicines, and other essentials.

Or anywhere else outside of the martial law order – though history shows us martial law quickly can go from being in just one city to an entire country. Unfortunately, fleeing martial law probably won’t be as simple as getting in your car and driving to another country.

Here are some of the issues you may encounter trying to flee:

The bottom line? You would need to leave BEFORE martial law.

Luckily (contrary to what many say), martial law doesn’t occur overnight. There are usually many warning signs before it happens – like political unrest, protests, and jailing of dissenters.

For example, there were border clashes and military buildup for years before martial law was declared in Armenia in 2020!

I have a Russian friend who left in 2014 during the Crimean War because she had a feeling things “would get bad.”

At the time, her friends and family thought she was crazy for fleeing. Now that Russia has invaded Ukraine, no one thinks she is crazy anymore. She had a much easier time leaving in 2014 than Russians do now that the country invaded Ukraine. (As of writing, Russia isn’t currently under martial law, but the situation is comparable).

So make sure you have a plan in place to leave at the first signs of things going bad.

It will be easier to leave if:

History shows us that protests – and thus the military responses – are usually much smaller in towns than in cities. This makes them much safer. You may still undergo curfews, but life may be relatively normal in small towns.

However, it only makes sense to go to a small town if you know someone there and can stay with them. Outsiders will likely be looked upon with suspicion. You may not be able to rent accommodation, and police target you as an outsider.

Remote locations, such as rural property or off-grid cabins, can also be a very safe place to go during martial law. Going into the wilderness might be a feasible option if you are skilled at survival.

If the location is far from any military points of interest (no dissenters setting up camp nearby, for example), you are unlikely to have any interference.

The downside of “bugging out” to a remote location is that you’ll need to meet all your own needs. Roadblocks, for example, might make it impossible to resupply in towns. You’ll also need to get to your remote location. Once martial law is in place, you might not be allowed to leave; you might even need to set off on foot!

Hospitals are generally considered very safe locations during martial law. They often remain operational, though with severe shortages of supplies.

Now, I’m not implying that you get injured so that you can go to a hospital during martial law. However, if you are a nurse, doctor, or someone else with medical training, you could volunteer to work in the hospital and even sleep there to avoid conflict.

There are exceptions to this. In Myanmar, under martial law, doctors and nurses were targeted. It shows that each case of martial law is very different, and there is no one “best” safe place to go.

Unsafe (Or Downright Stupid) Places to Be During Martial Law

There is a lot of advice about where to go during martial law online. But some of the suggestions are unrealistic or downright idiotic. Here are some of them.

A few websites recommended going to an abandoned location, such as an abandoned factory, during martial law. This might keep you safe for a day or two, but it’s a pretty dumb solution long-term.

In addition to martial law, now you’ve got to worry about defending yourself from desperate people who want your supplies.

In the military, you will be called to the frontlines of protests and riots. Yes, you will be safer than the protesters – but you still risk serious injury or death. You’d be a lot safer avoiding conflict altogether.

Oh, and let’s not forget about the guilt and PTSD you’d get from participating in teargassing or torturing your countrymen…  Refuse to participate? As one former Army serviceman said, “If you don’t follow the orders of your superior in the military.. they will shoot you.”

The idea is that you will be able to “blend in” and “hide in the herds” in a large city.   But recent history tells us that large cities are always the worst place to be during martial law.

Large numbers of troops, tanks, and even bulldozers get deployed to the cities. You have to deal with checkpoints, curfews, violent protests… There’s the risk of looting and break-ins.

Yes, these things can happen in smaller cities and towns too, but it’s not as likely. If you have somewhere to stay in a small town or remote location (and can get there before the situation gets dire), you will be safer there than in a large city.