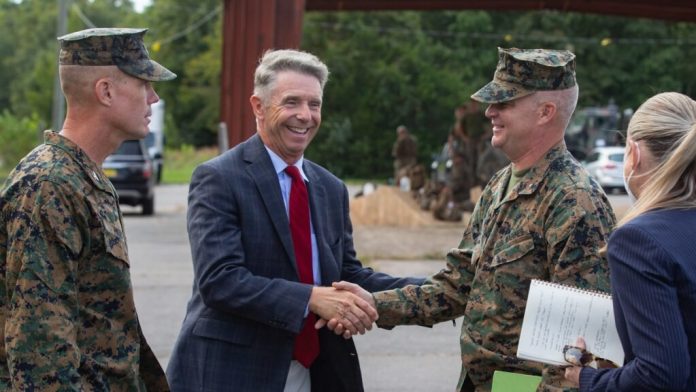 Last month, the House Armed Services Committee passed its version of the National Defense Authorization Act, with a $37 billion funding increase over what President Joe Biden requested. In the following op-ed, key HASC member Rep. Rob Wittman of Virginia argues that to ensure American can meet the challenges of Russia and China, the House needs to pass the NDAA intact.

The House and Senate are currently working to deliver robust defense funding for Fiscal Year 2023. Each Chamber continues to advance their version of the National Defense Authorization Act (NDAA), reflecting the sense of urgency that is essential to shore up the strength of our military and ensure we can successfully counter new and enduring challenges around the world.

As Congress continues to work on the final version of the FY23 NDAA, three realities must be accepted by policymakers. First, the international security environment is rapidly degrading. Second, our resources are not limitless, but intentional progress can be made. Third, time is not on our side as we enter an acute period of instability with China later this decade and address the near-term ramifications of Russia’s invasion of Ukraine.

When the Biden administration sent its $773 billion budget request for the Department of Defense to the Hill, however, there were a number of questionable decisions involved, which the NDAA attempts to fix. Next week, the full House will take up the NDAA for debate. Lawmakers must deliver a bill that reflects strategically sound decision-making, defense funding that reckons with the consequences of inflation and increasingly powerful adversaries, and investments in the ability of the US military to deter conflict.

Russia is watching us. China is watching us. Our allies are watching us — and they all want to see how seriously America is taking security in this destabilized world. I urge my colleagues to use this opportunity to send a clear message that our military will remain the strongest in the world, hoping to avoid conflict but unafraid to stand up for our core values.

So what changes are included in the NDAA approved by the HASC? Listing everything would be impossible here, but there are two trends we can point to: investing realistically in equipment and raising funds to match the inflation crisis.

Returning To Strategy-Driven Policy: The Case Of The LCS

Let’s just focus, as an example, on the Navy, where the administration budgeted for only eight new ships while retiring 24. With the action taken by the House Armed Services Committee and the additional funding authorized, the Navy alone is now poised to retire just 12 ships, while building 13.

Among those ships retained are five Littoral Combat Ships (LCS), perhaps the most controversial piece of America’s fleet, given their long history of failure and cost overrun.

Skeptics will point out that LCS have limited survivability, are more costly to operate than originally intended, and have struggled with mechanical malfunctions for years.

These concerns merit consideration. And yet, the situation in the Pacific is such that America cannot afford to simply throw away ships which could still have utility.

Yes, LCS have limited survivability when compared to a destroyer. However, to swap out each existing LCS for a new destroyer, the Navy would need to find budget room for an additional destroyer with a procurement cost of over $2 billion per copy, and direct operating costs that are over $10 million higher than direct operating costs for the LCS.

Second, critics might contend that there is no reason to maintain the capacity of the surface fleet, and funds recouped from divested LCS should be directed to submarines or long-range fires. But none of these alternative investments would fulfill the role the LCS would serve in a conflict in the Indo-Pacific, such as conducting merchant marine escort or mine hunting missions. These are low-end requirements that will endure.

Third, the Navy intends to continue shifting to its new concept of Distributed Maritime Operations, predicated on disaggregated forces and distributed nodes spread across a theater — realizing this concept requires platforms like the LCS. The Navy is wise to make this shift — the majority of wargames reflecting a Taiwan contingency suggest that such a conflict would be long and drawn out – in such scenarios, numbers inescapably count due to platform attrition.

A Realistic Budget: Inflation And Adversaries

Another place where the NDAA language improves on the administration’s request regards the word on everyone’s mind these days: inflation. It was clear from day one that the historically high inflation had not been accounted for in the president’s budget request. This reality would then greatly diminish the purchasing power of the US military.

Recognizing the ripple effects of such a serious miscalculation, I was proud to support a $37 billion increase above the president’s budget request for national defense accounts, ensuring growth of nearly 4% above inflation, and delivering a 2.4% inflation salary adjustment for substantially impacted enlisted service members. I also supported a reporting requirement for the Department of Defense to understand more completely how inflation is impacting their contracts with outside companies.

Still, accounting for the impacts of inflation on the defense budget will not allow us to make the investments we require this year to strengthen the Joint Force.

Russia poses an acute threat to the stability of Europe and the future freedom of Ukraine, and beginning in February of this year we have deployed or extended over 20,000 additional forces to Europe in response to the crisis. The US military must also be prepared to deliver on new force posture commitments, such as those promised at the Madrid Summit.

RELATED: How the Pentagon’s bad inflation math made a hollow budget

Simultaneously, China — already a military powerhouse — announced a 7.1% increase to its defense budget this year, reflecting yet another year of military spending hikes between 6-8% since 2018. While China continues in its emboldened and aggressive behavior inside the first island chain — such as recently claiming the Taiwan Strait as “China’s internal waters” — ties between Moscow and Beijing are only growing stronger.

The Biden Administration’s own 2022 National Defense Strategy confirmed that we must prioritize China as the pacing challenge in the Indo-Pacific as we prepare to deter aggression and prevail in conflict if necessary. The Biden Administration’s original budget request for FY23, however, did little to execute this strategy. The President’s budget request shrunk the Air Force by 282 aircraft and the Navy by 16 ships, and cut the Army from an active duty end strength of 485,000 for FY22, down to 473,000 by next fiscal year. Most concerning was this occurring against the backdrop of declining key readiness metrics that continue to require attention and improvement across the force. In the face of rising threats, undermining our military invites disaster.

Our obligation is to ensure that our service members have everything possible to give them an advantage on the battlefield, while working vigorously as responsible stewards of taxpayer dollars. These charges are enduring, but the challenges our military faces are steeper than they have been at any point since World War II. We must meet the moment accordingly.

Springfield Armory Announces Gear Up Promotion for All Striker-Fired Pistols