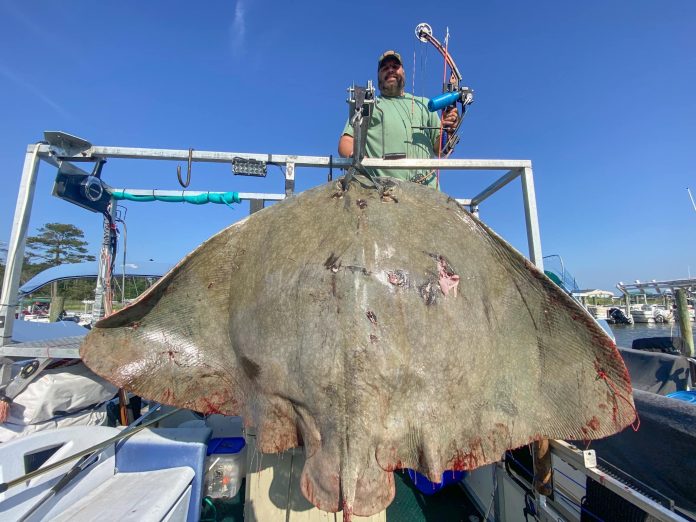 Jeremy Gipe of Camp Hill, Pennsylvania, just shot the new pending bowfishing world-record butterfly ray—and it’s an absolute giant. Gipe was fishing with Brossman Boys Bowfishing, a charter company based out of Delaware. Gipe is friends with Corey and Aaron Brossman, who run the outfit. After helping them with a motor repair on the morning of Thursday, June 30, Gipe accompanied them on an outing that evening, along with two military veterans.

They were fishing the Delaware Bay, but the bowfishing was slow because of poor water clarity. After shooting a cownose ray, they motored to the other side of the bay to see if the conditions were better there. Initially, they weren’t, but eventually, the water started clearing up. Around 11:30 p.m., Gipe spotted something beneath the surface. “I happened to just see a light flash out of the corner of my eye that I thought was a bluefish,” he says. “Then, I saw the triangle shape of the butterfly ray. Honestly, I figured it was one of the 130- to 140-pounders we’d caught before.”

Gipe let an arrow fly and made a solid hit right on the ray’s head. “When you shoot them in the head, for some reason they jump out of the water,” he says. “This one came 4 or 5 inches out of the water. The other two gentlemen on the boat were able to get arrows into the ray then. It ran out about 60 yards before turning around and swimming back toward the boat.”

When the ray neared the boat, Corey Brossman harpooned the giant fish. It took three of the men to hoist the massive fish onto the boat. That’s when they realized it was far bigger than a typical butterfly ray. “I actually felt nauseous,” says Gipe. “I couldn’t believe it when I realized how big it was.”

After getting off the water, they put the ray on ice. The next morning, they took measurements of it. The butterfly ray was 7 feet, 4-1/8 inches long and weighed 222.54 pounds. The fish just topped the Bowfishing Association of America standing world record, a 222.1-pounder that was arrowed by Nick Sampson in 2021. Gipe’s ray is the biggest fish he’s ever caught by far. After measuring it, they filleted it for meat. “It’s very similar to crab,” says Gipe. “We’ll fry it up and make it like pulled pork. We’ve also made it in different dips like a buffalo chicken or spinach dip.”

Gipe started bowfishing for carp as a teenager in Pennsylvania. In recent years, he’s gone bowfishing with the Brossman brothers once or twice each year. “I’m not in it for the records, per say,” he says. “I just loving being out on the water. But if another opportunity like this comes up, I’m not going to pass it up, either.”

The judging for Round 100 of the SurvivalBlog non-fiction writing contest.

Pessimist or a Realist? Our Present Situation