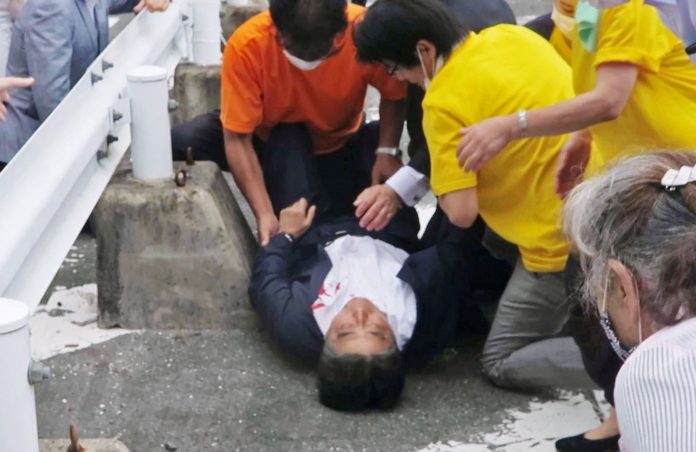 Japan is one of the most heavily gun-controlled democracies on Earth. That, however, didn’t stop an assassin from using what appears to be a homemade firearm to shoot and kill former Prime Minister Shinzo Abe as he delivered a campaign speech in western Japan.

Abe, 67, was shot from behind minutes after he started his speech in Nara. He was airlifted to a hospital for emergency treatment but was not breathing and his heart had stopped. He was later pronounced dead despite emergency treatment that included massive blood transfusions, hospital officials said.

Police arrested the suspected gunman at the scene of an attack that shocked many in Japan, which is one of the world’s safest nations and has some of the strictest gun control laws anywhere. …

Public television NHK aired a dramatic video of Abe giving a speech outside a train station in the western city of Nara.

He is standing, dressed in a navy blue suit, raising his fist, when two gunshots are heard. The video then shows Abe collapsed on the street, with security guards running toward him. He holds his chest, his shirt smeared with blood.

In the next moment, security guards leap on top of a man in gray shirt who lies face down on the pavement. A double-barreled device that appeared to be a handmade gun is seen on the ground.

Video of the shooting was captured by some in the crowd.

#Japan: Former Japanese prime minister Shinzo Abe has been shot dead with a homemade shotgun whilst giving a campaign speech. He was taken to hospital but died of his injuries. The attacker—reported to be a male in his 40s—was apprehended at the scene and arrested. pic.twitter.com/4XBaPFEgKw

This video from another angle shows the assassin approach Abe from behind as he delivered his speech, take aim and fire twice.

These photos show the suspect carrying what appears to be a homemade shotgun . . .

Another image showing the weapon. pic.twitter.com/UENg6LQuQY

Nara prefectural police confirmed the arrest of Tetsuya Yamagami, 41, on suspicion of attempted murder. They said an explosives team raided the suspect’s home to gather evidence. NHK reported that the suspect served in Japan’s navy for three years in the 2000s and that he said he wanted to kill Abe because he had complaints that were not related to political views.

You know why #Abe was easily shot?
Because we Japanese including the bodyguards believe guns are controlled and there are no guns.
What’s most important is the awareness that anything can happen. Control gives us the “feeling” of safety, but it only fools us.#guncontrol