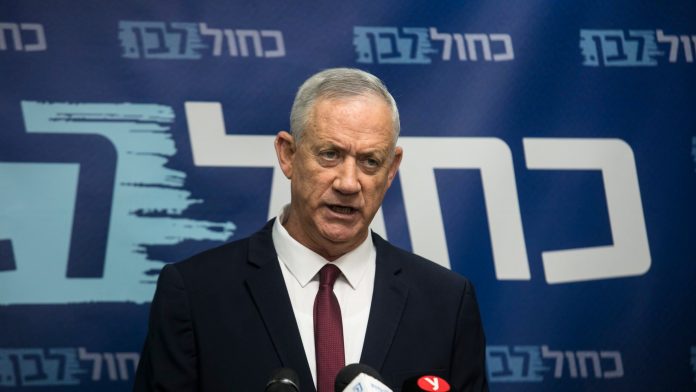 Israeli Minister of Defense, Benny Gantz speaks at the start of a Blue and White party meeting on June 27, 2022 in Jerusalem, Israel. (Photo by Amir Levy/Getty Images)

TEL AVIV: Israel has already done an eye-watering $3 billion in defense business with its new Arab partners in the region, but industry sources here said that’s just the tip of the iceberg.

The $3 billion figure came from none other than Israeli Defense Minister Benny Gantz on Thursday, when he also said that since the signing of the Abraham Accords in 2020, there have been about 150 meetings of Israeli defense personnel with counterparts in Gulf states party to the accords.

Israeli sources told Breaking Defense they expect that kind of business to blossom “dramatically,” as the Arab nations spend to upgrade their defenses against perceived threats from Iran and its proxies, especially when it comes to air defense.

Some of the tech will be on display for US President Joe Biden when he visits Israel next week, including Israeli-made laser-based air defense systems which Israel hopes to persuade the US to help fund through a special grant. A manicured display of various Israeli defense articles has been set up at the Palmachim air force base in central Israel for Biden’s visit, according to a video (featuring a rousing soundtrack) produced by the Israeli Defense Organization and provided to Breaking Defense by the Israeli military.

After Israel, Biden will visit the West Bank and then plans to fly to Saudi Arabia for the a meeting of the Gulf Cooperation known as the GCC+3. According to the White House, while in Saudi Arabia, Biden plans to discuss “means for expanding regional, economic and security cooperation, including new and promising infrastructure and climate initiatives, as well as deterring threats from Iran, advancing human rights and ensuring global energy and food security.”

The part about deterring threats from Iran may be of particular interest, as Biden’s trip comes after Gantz announced last month a joint, interconnected regional air defense system between Israel and unnamed regional allies known as the Middle East Air Defense Alliance (MEAD). Sources have told Breaking Defense, and Gantz has said publicly, that part of Biden’s remit in the Middle East will be to reassure parties potentially involved in such a network and to push for greater cooperation between Israel and Gulf nations. Notably, Saudi Arabia, the largest Arab power in the region, is not party to the Abraham Accords, though sources have said it, too, has expressed interest in Israeli defense technology.

According to retired Maj. Gen. Tamir Hayman and Eldd Shavit from the Israeli Institute for National Security Studies (INSS), Biden’s decision to visit Israel, made a few months ago and before Saudi Arabia was added to the itinerary, reflects first and foremost his desire to emphasize his exceptional personal commitment to Israel and his desire to reinforce the United States’ iron-clad commitment to Israel’s security and prosperity.

But the researchers said that while the visit to Israel is important to Biden on a personal level, the administration attaches much importance to a successful visit to Saudi Arabia — not least of which to try to get Saudi Arabia to do what it can to lower gas prices back home in the US.

Overall, the researchers point to the fact that the visit is also aimed at restoring the United States’ standing in the Middle East and imparting to the Arab countries, and especially the Gulf states, that they can rely on the US as their main ally.

“This would challenge the conception that has grown over the past year that the US is disconnecting from the Middle East, and the consequent intention of countries in the region to look East, especially to China,” the pair wrote.

America’s relative withdrawal from the region has been a double-edged sword for Israel, as sources said they’ve observed with concern encroaching Chinese and Russian influence, but it’s also prompted Gulf neighbors to turn to Israel for their defense needs — creating not just a diplomatic, but a financial windfall for the Jewish nation.

How To Make Bullets: A Handy Guide for Preppers and Hunters

Sorry Beto, ‘Gun Violence’ Isn’t the Biggest Killer of Kids in America, but Gang Violence is a Huge Killer of Teens