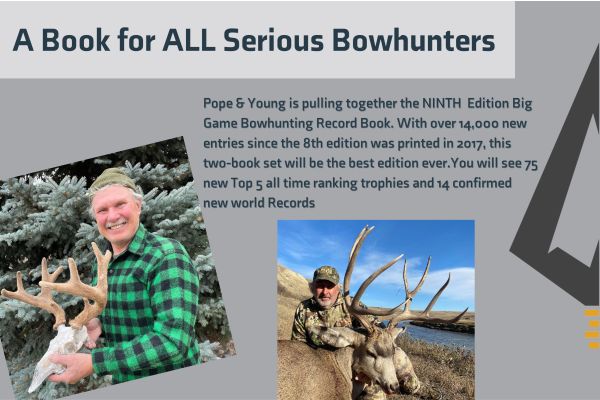 Pope and Young, America’s leading bowhunting conservation organization, announces the deadline for entry into the two-volume 9th edition Record Book.  The 32nd Recording Period will end on December 31, 2022.  This will be the deadline for consideration in the massive two volume Pope & Young 9th Edition Record Book.  To be considered for entry, your official entry must be post-marked by 12/31/22.

“Entering an animal in the books is something special, something that everyone with a qualifying animal should consider” says Dylan Ray, Marketing Director. “It isn’t about the hunter, it’s about honoring the animal, an animal that deserves to be in a book amongst his peers, for everyone to celebrate. We put our animals on a wall, and celebrate them in our own homes, but putting them in a record book will honor that animal forever, for everyone to celebrate.”

With over 14,000 new entries since the 8th edition was printed in 2017, this
two-book set will be the best edition yet. The Pope and Young Record Book has more entries than any other record book in North America.  This book is set to be published and available in April 2023. In it you will see 75 new Top five all time ranking trophies and 14 confirmed new world Records.  With the possibility of an additional 12 new World Records that are still currently ‘Pending’, there isn’t another record book that has ever showcased this many highly ranked animals.

ABOUT POPE & YOUNG:
Pope and Young is North America’s leading bowhunting conservation organization. If you are a fair chase, ethical bowhunter, and you care about preserving the culture and future of bowhunting, then you belong to the Pope & Young.  Join today at www.pope-young.org.

Deer Hunting: Guns Aren’t the Only Potential Danger When You’re Out in the Field