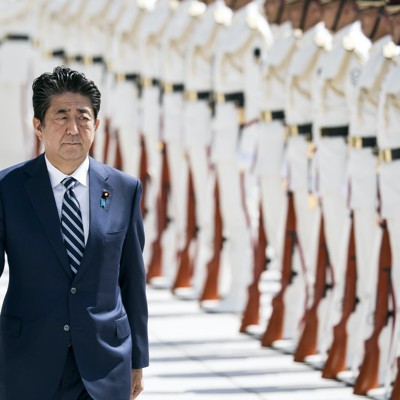 In 2014, former Prime Minister Shinzo Abe pushed through the cornerstone of what some experts said was his most important legacy: convincing Japan to ease into the idea that its pacifist post-World War II-era military policies had to evolve to best protect it from a rising China.

Abe, 67, was assassinated Friday, shot while giving a campaign speech for local election candidates in Nara, Japan. With his death, the West loses one of its most influential advocates in Asia for stronger counter-China policies in the Indo-Pacific region, and Japan’s leading voice for transforming its military and defense industry to better meet modern security threats. President Joe Biden in a statement called Abe “a champion of the Alliance between our nations.”

“His killing is a tragedy for the people of Japan and for all those who value a free and open Indo-Pacific,” said Defense Secretary Lloyd Austin, also in a statement. “As prime minister, Mr. Abe championed the vital and enduring alliance between our two democracies, paving the way for Japan to play an even larger role in our alliance. His work to strengthen alliances and partnerships across the Indo-Pacific – including through venues such as the Quadrilateral Security Dialogue of Japan, India, Australia and the United States – leaves a legacy of a more secure, stable and prosperous region.”

Article 9 of Japan’s post-war Constitutional language forbids it from having a military at all. In the decades since, the force Japan maintained had largely been for humanitarian response, such as for earthquakes, tsunamis, and a controversial deployment to Iraq in 2004 for reconstruction support.

Abe began to shift how its Article 9 language was interpreted, resulting in 2015 legislation based on a new interpretation, a “proactive contribution to peace.”

In order to protect its population from rising threats, Abe argued, Japan had to modernize, strengthen its military cooperation with the United States, and contribute to collective defense.

“He was instrumental in changing Japan to have a more flexible interpretation of the existing constitution, that would allow Japanese Self Defense Forces to be able to work much more closely with the U.S.,” said one Japanese government official who worked for Abe during his term as prime minister but was not authorized to speak publicly. Despite China’s militarization of islands it created in the South China Sea and increasingly aggressive tactics, the idea was not popular.

“He really had to reach out to a broader audience to talk about the very difficult security environment Japan was facing at the time,” the official said.

Over the next six years, Abe would see Japan’s navy launch the carrier Izumo, its first of two modern Izumo-class helicopter carriers capable of handling new Japanese V-22 Ospreys as well as Japan’s new fleet of F-35B Joint Strike Fighters, variants that can take off and land on its deck. Abe also oversaw the military opening roles to female officers and supported having new Japanese submarines include separate berths for women.

Hawaii’s Democrat Sen. Mazie K. Hirono, who describes herself as a Japan-born immigrant and the first Asian American woman in the Senate, mourned Abe as a close ally and said in their last of many meetings, in 2017, they discussed “the importance of the trilateral alliance of the United States, Japan and South Korea.”

Japan’s view of its military has further evolved since Russia’s full war on Ukraine began this year. In 2020, the last year Abe was in office, 40 percent of respondents to an NHK survey said Japan should have the capability to “directly attack enemy missile bases.” By 2022, 55 percent of Japanese respondents said that they should maintain a “counterattack capability,” or long-range strike, to destroy enemy missile launch sites. Japan faces missile threats from its neighbors China and North Korea.

‘What’s so interesting now, as Japan considers significant increases in defense spending, is that they’re looking at things like long-range strike capability, and these things now have strong Japanese public support,” said Chris Johnstone, Japan chair for the Center for Strategic and International Studies. “So he led, and the Japanese public support has come along, and I think this just reflects that he was ahead of the curve in understanding the China threat and thinking about what Japan needed to do about it.”

“His long-term vision was to seek a much bigger role for Japan in the international arena, not only on security, but also economic and global issues,” the official said.

In a statement, leaders of the Japan-focused Sasakawa Peace Foundation USA led by chairman and president Satohiro Akimoto said, “Abe was one of Japan’s great leaders, and he leaves behind a most significant foreign policy legacy that expanded Japan’s diplomatic influence around the world and strengthened the U.S.-Japan alliance. The steps that Japan took during his tenure to bolster the country’s legal and operational capacity to defend itself and collaborate with allies would not have been possible without Abe.”