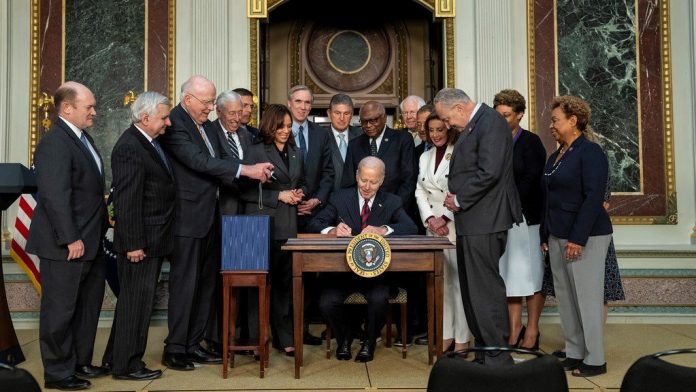 With the legislative calendar limited and the midterm approaching, the timeline for getting the fiscal year 2023 budget in place is growing tight. Adding pressure is the threat that President Joe Biden’s party may lose one or both chambers of Congress in November’s election. In this new op-ed, John Ferrari of AEI argues that it’s in the White House’s best interest to work out a two-year budget agreement now — including a big increase for defense.

When pushed, Congress and the Biden administration appear to have found a way to work out bipartisan agreements, notably the 2022 Omnibus in March and, in the last week of June, a gun safety bill. We have also witnessed the remarkable bipartisan cooperation in the Senate and House Armed Services Committees, where they have added $45B and $37B respectively to the defense authorizations for fiscal 2023, the budget beginning on Oct. 1.

Given that, and the fact that, in an election year, the legislative calendar is already getting tight, the Office of Management and Budget (OMB) should take a deep breath, reach out to Congressional leaders, and lay out a three-pronged budget agreement that will benefit both the White House’s agenda and ensure America’s defense is secured.

First, OMB should read the room and immediately cut a deal with the Senate appropriators for a fiscal 2023 bipartisan budget. Why start with the Senate appropriators specifically? It’s basic politics: Sens. Patrick Leahy, D-VT, and Richard Shelby, R-Ala., the leaders of the appropriations committee, brokered the 2022 budget deal, and both are departing the Senate after this term. Getting a deal done, and hence enabling our government to start its fiscal year with no continuing resolutions for only the fourth time since 1977, would be a crowning achievement for both men as their Congressional legacies come to a close.

So, what would the FY23 budget deal look like? It could be anchored off of the bipartisan HASC marks which added $37B to the defense budget, or off of the SASC $45B add. Similar to 2022, the non-defense agencies would get the same percentage increase in spending as defense. A deal now would enable the appropriators to hammer out the details and pass the FY23 budget on time. Waiting until after the mid-terms will not only waste billions of dollars under a continuing resolution, but depending on the election results — and Republicans certainly look likely to win both chambers at the moment — this might be the White House’s best chance to increase non-defense spending for the next two years. OMB should take the money and run while they can.

That’s the baseline for what OMB should do. But if the White House is feeling truly ambitious — and if it’s smart — it should use the same conditions that set the potential for an FY23 agreement to bang out a deal that also covers FY24.

The same benefits for OMB exist in a two-year deal as a one-year deal, except magnified. The FY24 budget proposal is due to Congress in February 2023, eight months from now. Getting a deal now on the top line levels will provide the defense and non-defense agencies the time required to prepare their justification for the use of funds. If “good government planning” is not sufficient justification, then the second reason is that OMB is more likely to get a bipartisan majority that will accept higher domestic spending tied to higher defense spending right now rather than after the midterms. A Republican Congress is almost certain to increase defense spending while looking to decrease non-defense spending; having the toplines for both locked in avoids a bruising budget fight ahead of the 2024 presidential election.

Getting that extra year of budget agreement, however, would likely require OMB be realistic about defense figures. According to the FY23 projections from OMB during the 2023 budget rollout, OMB allocated $801 billion in 2024 for DoD, up 3.4% from the $773 billion request it made in FY23. While that seems like a large increase, it certainly does not keep pace with inflation, and it is lower than either the HASC or SASC additions currently on the table. That simply won’t fly with members of Congress that would need to get on board to make this happen.

RELATED: Congress must deliver an NDAA that meets the world as it is: Rep. Wittman

We want the Pentagon to smartly take its time to allocate the additional resources, not add them at the end of a year’s long process. The current funding levels are forcing the Pentagon to cut more warfighting capacity to such an extent that the Secretary of the Air Force recently said that these planned budget levels will not allow him to conduct two wars and modernize at the same time. This certainly cannot be the message we send to China right now, given that there is war in Europe going on.

For real buying power in FY24, OMB should start with the FY23 HASC additions in the amendment [PDF] proposed and passed by Reps. Jared Golden, D-Maine and Elaine Luria, D-VA., which added nearly $37B to the defense budget. Of that additional money, $7.1 billion is for inflation related one-time increases for construction, pay bonuses and fuel costs. The remaining $28.5 billion, which does not include aid to Ukraine or Department of Energy nuclear weapons, is what the HASC apparently agrees is inadequate real buying power in the Pentagon’s budget; of the $28.5B, 57% is for capital investments in procurement and military construction. Clearly the committee is sending a signal that deferring procurement, as my colleagues at AEI, Mackenzie Eaglen and James Mishmash, have pointed out, is not a good idea. What is even more interesting, is that the committee believes the Navy is the service in the need of the most funding increase, receiving a $10.5B plus-up.

So, if we start with the $773B DoD proposed in FY23 and add the Pentagon’s assumed 2.3% inflation rate, we get to $791 billion. Add the $28.5B from the HASC and the total for FY24 is now $819 billion. But we know that DoD massively underestimated inflation in the FY23 budget, and they did not provide Congress with guidance on how to allocate additional funds for inflation. Just how bad is inflation underestimated? It is at least twice as bad, if not more, than the 2.3% estimated by DoD; therefore over two years, that shortfall is at least 5% and potentially more. With a 5% underestimation of inflation over the two-year period, that is a $41B shortfall, meaning there is a strong argument that the DoD budget for FY24 should be in the realm of $867B — $66B higher than the current OMB guidance.

RELATED: How the Pentagon’s bad inflation math made a hollow budget

With a FY23 and FY24 budget deal in hand, OMB needs to do one more thing with this Congress. The third part of this deal would be legislation that would increase the pay of our junior enlisted service members, raising the minimum pay level to $31,000, the equivalent of about $15 per hour. Recruiting is now a full-fledged crisis across the services, so much so that the Army briefly proposed rescinding its requirement to have a high school degree before scuttling that plan in the wake of criticism.

The difference between the Russian military’s performance in Ukraine and the United States military’s recent successes is not equipment or technology — even though there are real factors. The true difference is the US military’s non-commissioned officer corps. Since we grow our non-commissioned officers from our junior enlisted, we need to recruit the best and brightest America has to offer. Clearly, we are not paying our enlisted force enough.

Summer is now here. We have just 90 calendar days until the new fiscal year begins and Congress will be out of session from Aug. 8 to Sept. 5 — leaving few legislative days to get the budget deal done. If the Democrats lose control of the House or the Senate in the mid-term elections, OMB will find it much more difficult to reach consensus on adding money to non-defense programs. Given the bipartisan consensus in the Armed Services Committees increases to defense spending, OMB can leverage that consensus to raise spending for non-defense programs while they still have control of the House and the Senate, not just for 2023, but also for 2024, while at the same time taking care of our military families by raising the pay for our junior enlisted service members.

Maj. Gen. John Ferrari, US Army (ret.), is a visiting fellow at the American Enterprise Institute (AEI) and is the former director of program analysis and evaluation for the US Army.

Senator to Elon Musk: ‘Fix Your Companies. Or Congress Will’

“A free people ought not only to be armed, but disciplined…”