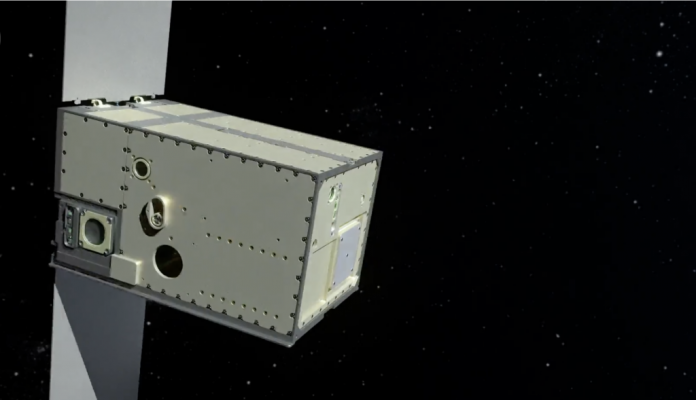 WASHINGTON: As the Space Force moves to more fully embrace the use of commercial kit — from antennas to radios to satellite buses — in an effort to speed development, cut costs and keep up with state-of-the-art capabilities, programs often run up against hurdles caused by proprietary corporate technology.

Aerospace Corporation’s just-launched Slingshot 1 experimental CubeSat was designed to figure out how to help resolve that problem, via on-board experiments to test various types of modular and autonomous technologies that use open standards and non-proprietary hardware and software, Aerospace officials told Breaking Defense.

Slingshot 1 is a 12-unit CubeSat, about the size of a shoebox, carrying 19 experimental payloads — 16 of which were designed by Aerospace’s lab. The experiments range from on-board processing software to a novel small thruster engine.

“So, we looked to answer: ‘How can we test technologies more quickly on orbit? How can we decrease the satellite development timeline to be able to plug and play payloads or experiments … into a spacecraft bus and launch them’?” explained Hannah Weiher, Slingshot program manager at Aerospace’s Innovation Lab.

But perhaps the most important, she said in an interview on July 6, is the electrical interface the lab developed — essentially a universal USB port designed using open standards to allow for those “plug and play” payloads.

While designing the various experiments, Weiher said, “we determined there’s a need for a standardized interface.”

That interface, called Handle, is unique in that it is truly optimized for use by any device made by any one contractor — unlike some proprietary interfaces, like a similar one developed by Lockheed Martin, said Dan Mabry, systems engineer at Aerospace’s Innovation Lab.

“If you look at a Lockheed Martin standard, it looks like an evolution of their last 15 or 20 years of development. So they’ve got hardware and test equipment that they’ve developed that’s been an evolution of their proprietary standard. And so they’re bringing that forward,” he said. “Unlike a vendor like Texas Instruments or Analog Devices that really is trying to service the electronics industry, what the big contractors are really doing more is they’re trying to push their embedded standard and make … the other big contractors conform.” 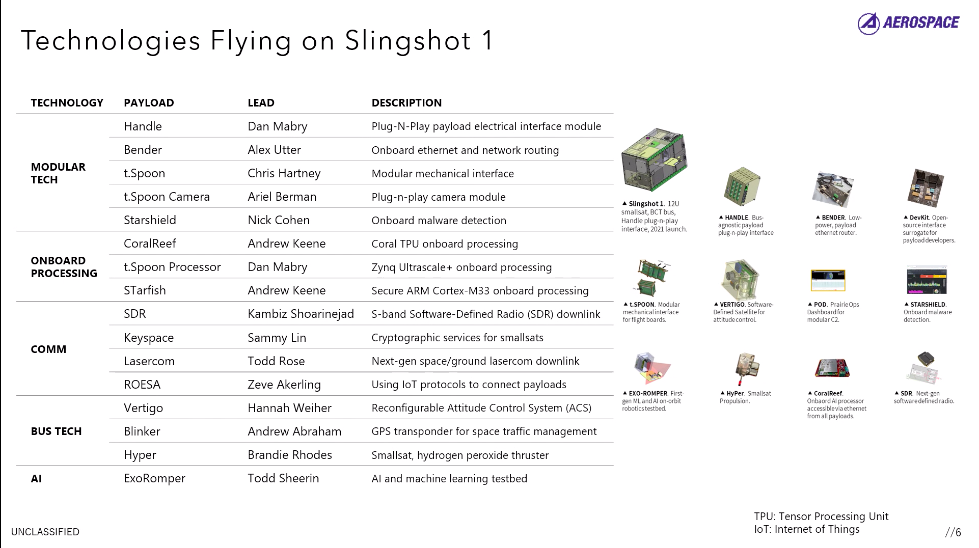 Aerospace, he explained, because it is a federally funded research and development center (FFRDC) and not a for-profit vendor, is making all of its technical work available publicly with the goal of helping the corporation’s primary customer, the Department of the Air Force, which is responsible for overseeing Space Force acquisition.

“We’re not competing with anybody,” Mabry stressed.

In a similar vein of trying to standardize how satellite payloads are integrated, another experiment aboard Slingshot 1 is a low-power ethernet and networking router called Bender.

“I don’t think you get much argument that ethernet is not working in the world in terms of interconnectivity, right?” said Mabry. “But the problem is when you when you try to elaborate or extrapolate the ethernets that you have in your office or at home to a satellite, it’s just too high power. So what we did is took that that thing and addressed the problem to kind of pull it back into the satellite regime a little bit better.”

In addition to the router, a modular mechanical interface called t-Spoon, and a plug-and-play camera module called t-Spoon camera, round out the set of payloads designed to test the concept of interchangeability.

Among the other experiments aboard Slingshot 1, perhaps the most interesting is a next-generation space to ground laser communications downlink. The Space Force and the Space Development Agency, which will be merged into the service in October, are pursuing optical communications links as they seek to augment today’s military satellites located primarily in the Earth’s outer Geostationary Orbit with large new interlinked constellations in the closer Low and Medium Earth Orbits.

Sammin: Shall-Issue Concealed Carry is a Matter of Equality, Not a Safety