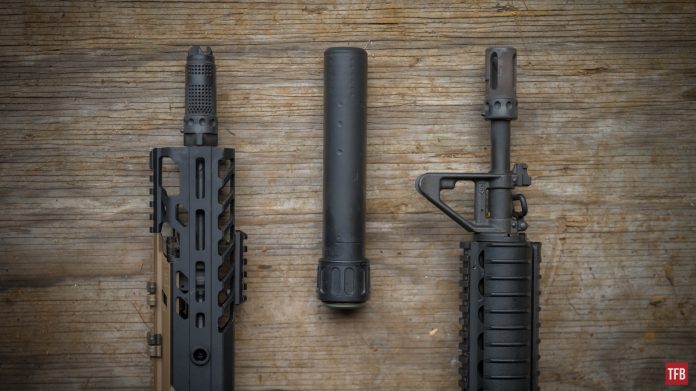 Good morning everyone and welcome back to TFB’s Silencer Saturday brought to you by Yankee Hill Machine, manufacturers of the affordable performer YHM Turbo K rifle suppressor. Last week we tested the B&T USA ROTEX-X on an 11.5″ select fire carbine. This week we go a size up with the Knight’s Armament KAC 762 QDC or a variety of different hosts. How does this legacy model stack up? Let’s take a look. You know what they say when you assume anything. However, today I am going to make one assumption – the first KAC 762 QDC suppressors were designed around the 7.62 x 51 cartridge and not 300BLK. More specifically, this suppressor was meant primarily for supersonic rounds in a .308WIN rifle and not subsonic rounds through a 300BLK carbine. If the KAC 762 QDC was designed for the KAC SR-25 rifle, how will if perform on shorter barrels with bullets traveling nearly 1/3 of the velocity of .308WIN?

The KAC SR-25 family of rifles and upper receiver groups are nearly impossible to find on the retail market at the moment. So we’ll be using the budget-friendly and very capable SIG 716i. For subsonic 300BLK, we’ll use the SIG MCX Virtus short stroke carbine platform. Both of these guns have seen their fair share of suppressors and represent two of my favorite long guns. For 5.56, we will us a fairly standard 11.5″ barrel with a carbine length gas system. For next week’s review of the KAC 556 QDC/CQB silencer, the KAC SR-15 upper receivers in the 11.5″ CQB carbine and the 14.5″ hybrid mid-length configurations will be used.

Knight’s Armament uses a thread locking compound called Rocksett to keep their muzzle devices in place which makes swapping mounts a bit more complicated. In addition, the E3 bolt has a different lug geometry than a standard Using reaction rod style barrel extension wrenches other than the KAC Knight Stick will damage your gun and you will cry. We will cover all of the SR-15 nuances in next week’s review.

The KAC Quick Disconnect (QDC) system is one of the most capable suppressor attachment/mount combinations I have ever used. It unlocked easily every time and I really tried to get it stuck – I took a smoking hot KAC 762 QDC and put it on to a cold mount and let it cool, figuring the contraction of the metal would freeze everything in place. Instead, the mount unlocked and easily slipped off of the flash hider. This is truly one of the best one-handed QD mounts on the market.

Let’s take a look at the numbers.

Here’s the KAC 7.62 flash suppressor threaded in 1/2 x 28 made to run the QDC on 5.56 hosts. As we discussed in the mount function article a few weeks ago, the 556 QDC and 762 QDC mounts and muzzle devices are different sizes, virtually eliminating the possibility of accidentally using the wrong silencer on the wrong gun. The 7.62 MAMS device is a beast of an all-in-one flash hider/compensator/muzzle brake combination. But it is also one of the most advanced muzzle devices I have ever seen. I’ll see about getting some slow motion video before I need to sell it on the used market in a couple of weeks. I am not an expert. I am just one guy who happens to love silencers and suppressed firearms. I am working on procuring a sound meter to add some relevant observational data in the coming weeks. While it is nice to have video of these suppressors at work, camera microphones and other recording equipment are incapable of accurately capturing the true report of a suppressed firearm.

The KAC 762 QDC was an average performer on subsonic 300BLK on the MCX Virtus. If your main goal is suppress a 300BLK carbine or PDW in the quietest possible configuration, the legacy KAC 762 QDC suppressor is probably not a god choice.

Where this KAC silencer really shines is on supersonic hosts. Even shooting the small 5.56mm bullet through the large 7.62mm bore was surprisingly impressive. The 11.5″ carbine is not locking back on an empty magazine with any suppressor and buffer combination. As I mentioned last week, the addition of a Riflespeed adjustable gas block will allow me to tune both 5.56 and 300BLK hosts for each suppressor test.

Let’s take a look at the video.

At nearly eight inches, the legacy KAC 762 QDC suppressor is on the long side when compared to other leading models. However, the extra length and internal geometry really helps on the 308Win AR-10 platform. On a 223Rem carbine, the length and weight is less noticeable and the KAC QDC does a great job at knocking down the blast. Unsurprisingly, this is not a top performer when it comes to subsonic 300BLK. The motto ‘the right tool for the right job’ comes to mind.

We’ll see you back here next week for the KAC 556 QDC review on TFB’s Silencer Saturday. Be safe and have fun. All YHM Products At Brownells

VIDEO: ‘He Shot My Arm Off,’ Wounded Robber Screams Out After Shotgun-Wielding Store Owner Lands One