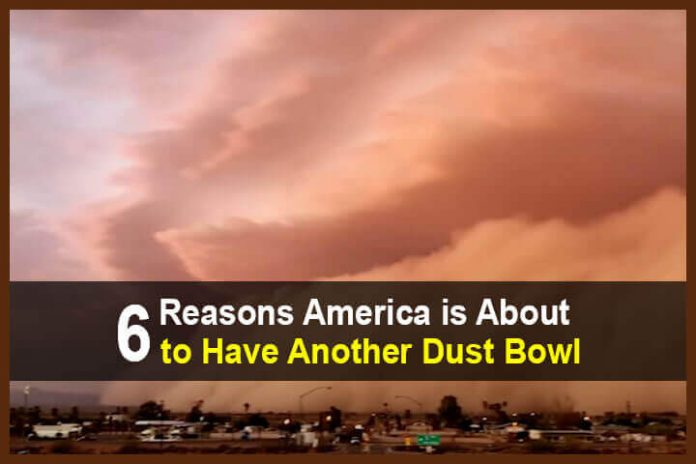 If you’ve never heard of the Dust Bowl, it was a decade-long drought that decimated the Great Plains in the 1930’s. It not only aggravated the global depression of the 30’s but disrupted the lives of millions of people and resulted in the foreclosure of 1/3 of all farms and fields across the United States.

The Dust Bowl got its name from the furious dust storms that swept the entire country originating in the Great Plains. The dust was so thick and the storms so intense they became known as “Black Blizzards”, literally blocking out sunlight and turning the surrounding country side black as night.

An alarming condition known as “Dust Pneumonia” plagued the people living in the Great Plains. The dust was so invasive that even the interior of homes were covered in dust that lingered in the air and puffed into clouds whenever disturbed.

Can it Happen Again?

The short answer is yes. In fact, some predictions put the return of the dust bowl as early as 2025. This isn’t another one of those “watch out for 2100” scenarios. Climate change is happening fast and other conditions are coming together to make another dust bowl not only likely but inevitable.

What Caused the Dust Bowl of the 30’s?

Two fundamental factors combined to create the dust bowl of the 30’s: poor farming practices and drought. Of the two, drought is the most significant factor but the farming practices of the time fueled the dust.

The Great Plains of the United States was a broad field of natural grasses that covered 1,125,000 square miles from Texas north to Alberta, Canada and stretched from Colorado through Nebraska to Iowa.

A post-World War I recession led farmers to try new mechanized farming techniques as a way to increase profits. Many bought plows and other farming equipment, and between 1925 and 1930, more than 5 million acres of previously unfarmed land was plowed

With the help of mechanized farming, farmers produced record crops during the 1931 season. However, overproduction of wheat, coupled with the Great Depression, led to severely reduced market prices.

The wheat market was flooded, and people were too poor to buy. Farmers were unable to earn back their production costs and expanded their fields in an effort to turn a profit. They covered the prairie with wheat in place of the natural drought-resistant grasses and left any unused fields bare.

But plow-based farming in this re­gion cultivated an unexpected consequence: The loss of fertile topsoil that literally blew away in the winds, leaving the land vulnerable to drought.

And of course that’s exactly what happened. The rains stopped. By 1932, 14 dust storms were reported, and in just one year, the number increased AND nearly 40 black blizzards occurred. 1934 was the worst year with a drought that hadn’t occurred for a thousand years.

­Millions of people fled the region. The government enacted aid programs to help, but it wasn’t until 1939 when the rain returned that relief came.

It’s easy to look at the 1930’s as a fascinating history lesson, but there are 6 signs that conditions are coming together to not only create another Dust Bowl but one that could be even worse than the Black Blizzards of the 30’s.

When that water is gone, the effects will be unprecedented and scientists are warning that nothing can be done to stop the depletion.

Currently, the Ogallala Aquifer is being drained at a rate of approximately 800 gallons per minute and the average depletion rate is picking up speed. Last year, the entire water table dropped by 12 inches.

According to the U.S. Geological Survey, since 1940 “a volume equivalent to two-thirds of the water in Lake Erie” has been permanently lost from the Ogallala Aquifer. If nothing changes, the aquifer could be nearly empty in 20 years.

Drought conditions have become the “new normal” in many areas of Texas, Oklahoma, Kansas and other states in the middle part of the country.

Scientists tell us that the wet conditions that we enjoyed for several decades after World War II were actually the exception to the rule and that most of the time, the interior west is incredibly dry. They also tell us that when dust bowl conditions return to the area, they might stay with us a lot longer than a decade like they did during the 1930s. Or worse…

University of Regina paleo-climatologist Jeannine-Marie St. Jacques says that decade-long drought can get a lot worse. She and her colleagues have been studying tree ring data and, at the American Association for the Advancement of Science conference in Vancouver, she explained the reality of droughts.

“What we’re seeing in the climate records is these megadroughts, and they don’t last a decade—they last 20 years, 30 years, maybe 60 years, and they’ll be semi-continental in expanse. So it’s like what we saw in the Dirty Thirties, but imagine the Dirty Thirties going on for 30 years. That’s what scares those of us who are in the community studying this data pool.”

And she’s not alone. According to the U.S. National Academy of Sciences, the U.S. interior west is now the driest that it has been in 500 years. There’s a dashboard that tracks water levels in the United States and displays water depletion in real time.

New research says that a drought like that of the 1930s is now twice as likely due to climate change. As droughts become megadroughts, the possibility of a new Dust Bowl looms, and modeling suggests its effects would be devastating.

Globally, 19 out of 20 of the warmest years on record have occurred this century. Average global surface temperatures—including over oceans—have increased by about 1.1 degrees Celsius since the pre-industrial era, the standard benchmark for global warming.

“The 1930s Dust Bowl heat waves were extremely rare events that we might expect to see once in a hundred years,” said Tim Cowan, a researcher at the University of Southern Queensland in Australia, and lead author of a study in Nature Climate Change.

“Under today’s levels of greenhouse gases, dust bowls are more than twice as likely to occur, with their period-of-return reduced to once in around 40 years.”

Continuing wildfires have burned millions of acres of vegetation in the central part of the United States in recent years. Wildfires burned an astounding 3.6 million acres in the state of Texas alone during 2011. This helps set the stage for huge dust storms in the future as the land is left exposed without vegetation or plant cover to protect the soil.

Wildfires weren’t as much a factor in the 30’s. They occurred but the frequency of wildfires today is unprecedented and the numbers are rising.

Wildfires burn off trees, brush, wild plants and grasses that maintain soil integrity. Without the cover of vegetation, the soil is exposed resulting in mudslides in the event of rains or flooding, or dust storms when exposed to heat and high winds.

Given the rising temperatures that have occurred over the last century, it’s inevitable that drought leading to high winds are going to lead to dust storms and the increased likelihood of the next dust bowl.

In a study published in 2020, it was determined that rapid cropland expansion is making more of the nation’s topsoil vulnerable to wind erosion — a pattern that echoes the 1930’s.

The summary of that study was clear and direct:

“Atmospheric dust levels are rising across the Great Plains at a rate of up to 5% per year. The trend of rising dust parallels expansion of cropland and even seasonal crop cycles. And if the Great Plains becomes drier, a possibility under climate change scenarios, then all the pieces are in place for a repeat of the Dust Bowl that devastated the Midwest in the 1930s.”

The hard economics of the commodities markets has also forced many farms to plant for profit as they try to anticipate which crops will be the most profitable. That seems to make sense from a business standpoint but it compromises crop rotation which is so critical to keeping soil fertile. The result is the need for more fertilizer which is currently at some of the highest prices ever seen.

Ultimately, some farms simply choose not to plant any crops rather than roll the dice on commodities markets at the mercy of unpredictable world events, a failing supply chain, and higher and higher fertilizer costs. The results are fallow fields without cover crops, further exposing the soil to heat, drought, and wind resulting in…dust.

Worldwide, dust storms are a regular occurrence and the dust storms that regularly sweep the Sahara Desert in North Africa actually travel across the Atlantic Ocean and act to fertilize the Amazon River basin in South America.

Dust storms are a common occurrence across the Middle-East and up through Asia to the Gobi Desert in Mongolia. What’s not common are dust storms in North America. At least not since the 1930’s. But they’re happening more and more.

Weather satellites of the GOES-R Series (short for Geostationary Operational Environmental Satellite-R Series) have an instrument that can spot dust storms. And all indications are that both the size and the frequency of dust storms over North America are increasing.

Another indicator is the number of critical care visits to hospitals due to severe breathing problems caused by dust storms in the U.S.

As all of these factors continue to worsen, they will create a positive feedback loop causing each factor to feed on the other and ultimately creating what so many scientists are predicting: a return to the Dust Bowl.

The first dust storm you experience will most likely be unpredicted by your local news stations. As they continue, dust storm predictions and tracking will start to become as common as thunderstorm and heat wave forecasts.

The most common sign of an oncoming dust storm is a change in the sky stretching from the horizon to various altitudes. The color will be different than usual cloud cover and can range from red to brown to deep grey and black.

If you see these conditions approaching you, or if there are actually predictions for a dust storm, here are some immediate things to do:

And all of that is for just one dust storm. As they become repeating events some additional steps are worth considering.

Unfortunately, these are only preliminary precautions for when dust storms first begin to appear. As time goes on and drought and dust continues, the effects on everything will grow and most likely make matters worse. New guidance will eventually emerge for how to deal with the dust, and it’s possible an entire generation will only know a life in a dust bowl.

Hopefully, it doesn’t come to that, but too many experts are calling it this time and it looks like yet another challenge to life in the 21st century.

Thousands of Fish Found Dead in the Klamath River