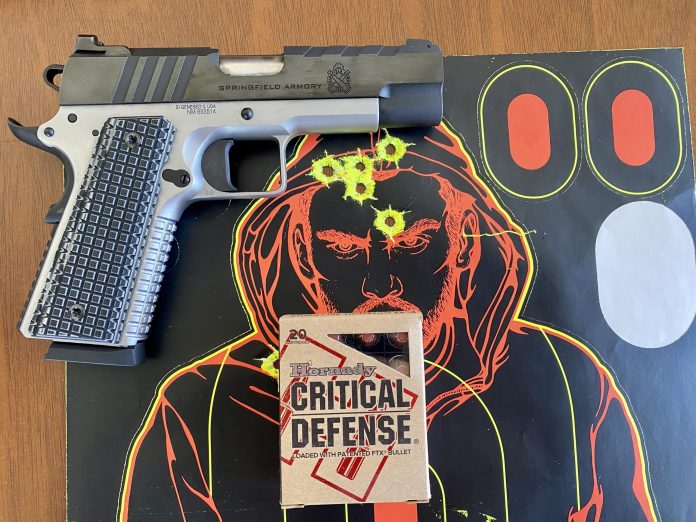 The “Bad Guy” received one splitting headache–the kind of headache created by five, hard-thumping rounds of Hornady Critical Defense .45 AUTO to the front of the noggin.

Fortunately for the Bad Guy, he was only a Birchwood Casey Casey Shoot-N-C target of an armed thug wearing a hoodie. The self-defense rounds were launched from a Springfield Armory 1911 Emissary 4.25” pistol that I shot from ten yards, offhand, and measured 1.5-inches.

All my other testing of this pistol, from distances closer and further, only confirmed what Bad Guy found out first-hand: the 1911 Emissary 4.25” was an accurate workhorse of a semi-automatic with the custom-gun looks found in handguns costing thousands more. Comfortable in hand, solid and eminently functional, the 1911 Emissary 4.25” and its Commander-length barrel would be an excellent choice for concealed carry, home defense, and range-time fun.

I received the 1911 Emissary 4.25” in .45 ACP and was immediately impressed with its sharp appearance. Springfield’s intention with the Emissary line was to create a 1911 with all the functionality of John Browning’s original semi-auto and with the looks and styling of a more custom firearm.

The Emissary is built around a forged stainless-steel frame and forged carbon steel slide, done in an attractive two-tone color scheme, with the slide finished in a shiny black while the frame is silver-colored. The distinctive squared trigger guard provided ample room for my index finger, even with gloves. And the slide’s “Tri-Top” cut adds to the pistol’s custom looks. The flattened top strap is finished with 40 LPI serrations to diffuse light and reduce glare, too.

I began my shooting at five yards, offhand, and all three rounds produced five-shot groups where the bullet holes touched one another and came in at an inch or just slightly larger. It was too easy!

I moved back to the ten-yard line, and still firing offhand, placed several five-shot groups at 1.25 to 1.5 inches with each of the three ammo brands. The Polycase Inceptor won that round with a 1.2-inch group.

Then, I backed off to 15 yards and shooting from a rest, pegged five rounds of the Hornady Critical Defense at 1.5-inches.

I recently hosted a half dozen newcomers to provide a hands-on introduction to handguns and shooting. First, all of them shot a semi-automatic chambered in .22LR, and then a pair of 9MM semi-autos. These newbies did pretty well with those three pistols. But eyes got wide when I brought out the Emissary and showed them the pistol’s .45 ACP ammunition it used versus the .22LR and 9mm they had been shooting.

Yet, all six of these new shooters were more accurate with the Emissary than the other pistols, and three of them flatly stated, “I have to buy this gun! I love it!”

One feature they commented on was the firm push-back recoil of the 45 ACP versus the snappier 9MM recoil which resulted in more muzzle flip compared to the Emissary. The heavier, bull barrel of the 1911 Emissary 4.25” no doubt played an essential role in reducing muzzle flip and directing much of the recoil back into the hand.

Part of the reason for the above-noted accuracy were the sights on the 1911 Emissary 4.25”. The rear sight’s U-Notch, outlined in white, came up to my eyes very easily and made the front post’s green tritium dot extremely visible.

The trigger on the Emissary was another huge plus, and broke cleanly at an average of just 2 pounds of pull weight, according to my Lyman Electronic Digital Trigger Pull Gauge. The face of the trigger was serrated, too. These serrations made for a very tactile feel and helped me recognize when my finger pad was no longer in the correct position.

Springfield terms the grip pattern as the “grenade” style, and it is reminiscent of the segmented surface on a World War Two-era hand grenade. That grip pattern provided a very, very solid hold, much better than the sandpaper-like stippling found on many poly-framed pistols.

For home defense, concealed carry and just introducing new shooters to our sport, the 1911 Emissary 4.25” will be a fine choice. While the $1,349.00 suggested retail is not inconsequential, that money will reward a shooter with a very accurate and functional 1911 that features a custom look, for at least $1,500 less than many of the custom-made 1911’s on the market today.

About the author:
Brian McCombie writes about hunting and firearms, people and places, for a variety of publications including American Hunter, Shooting Illustrated, and SHOT Business. He loves hog hunting, 1911’s chambered in 10MM and .45 ACP, and the Chicago Bears.