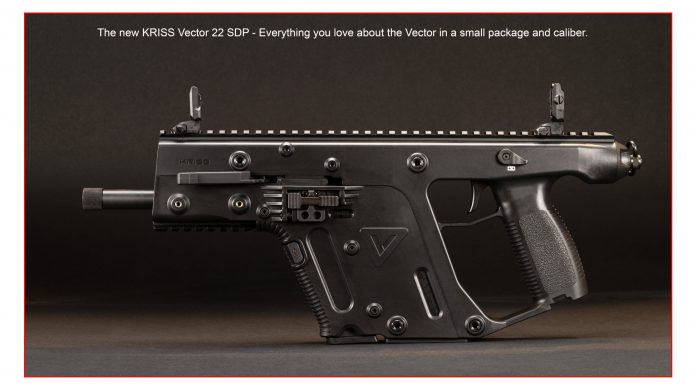 It is no new concept that training is the key to performing when it counts. It is also very widely understood that with weapons training, using the exact weapon for training and combat is crucial. Or, to sum it up in a more familiar and over-used term, “you fight the way you train”. And now, the very popular KRISS Vector pistol caliber carbine (PCC) is available in .22 long rifle for just this purpose. Or, perhaps you are just interested in lots of plinking fun – it is perfectly suited for that, too.

The Vector .22 is available in two form factors, a carbine (CRB) with 16” barrel and adjustable stock – and a pistol (Vector SDP) with 5.5” barrel and the absence of any stock. For this review, I tested both.

The KRISS Vector is a uniquely designed gun that has previously been offered in 9mm, 45ACP, and 10mm chamberings. The semi-auto version is based on the fully automatic submachine gun that makes its living in military and law enforcement duty. It gained its notoriety for its very different design elements and the extremely low bore axis (actually below the trigger and grip centerline) which makes it resist muzzle climb with rapid fire. The innovative action of the Vector in the centerfire calibers sends the bolt at a downward angle rather than straight back as the reciprocation occurs, which many feel negates or minimizes the felt recoil into the shooters shoulder. The new .22 LR version of the Vector maintains the design elements, aesthetics, and ergonomics of the larger caliber siblings, but the bolt operation is a more traditional straight-back type with a single guide rod and recoil spring.

The Vector has always been popular with many shooters because it answers in the affirmative to the question, “yeah, but does it take Glock mags?”. That is, for 9mm, 45ACP and 10mm. The .22LR version takes a customized magazine that looks much like a standard Glock magazine but is designed to take the .22LR cartridge. Magazines are available in capacities of 10 or 30 rounds.

The design of the KRISS Vector is basically upside-down compared to most carbines or rifles. The lower receiver contains the barrel and bolt assembly and the related controls, as well as the magazine. The upper receiver is where you’ll find the trigger and hammer, as well as the ambidextrous safety switch. But referring to the separated halves of the Vector as ‘upper’ and ‘lower’ don’t really paint the right visual image – when compared to say, the typical AR style gun. Each separated half contains both an upper and lower portion. Separating them for maintenance or cleaning is a cinch – there are just three pins to pop out. A punch may be required the first few times, but after some use it is really a toolless process. The large and fairly heavy bolt assembly is removed by drifting out two additional pins – and I found that a small punch is required to do this. These pins drift in one direction only – be sure to use the operator’s manual as a guide. Because the bolt is fairly heavy and has a large friction surface, the recoil spring is akin to something that might be found in a ballpoint pen – but it gets the job done fine. The hammer is well in front of the trigger, but the added linkage does not result in the expected grittiness or hardness of the trigger pull. In fact, the trigger in the .22 Vector is quite crisp.

The bolt catch is one of the best in the business. It is essentially a rocker arm, with the front end as release and rear end as catch. It makes for very easy and intuitive one-hand operation and is a very smooth control to operate. Magazine release placement is something of a head-scratcher for first timers, until you use the gun. Placed a considerable distance from the trigger guard and grip handle, there is no way that any inhabitant of planet earth can reach it with the index finger, as we are accustomed. However, the wisdom of this control’s placement becomes apparent with use. The reversible (but not ambi) control is set up for support hand use. For the right-handed operator this means it is on the left side of the gun.

The workflow of reloading the KRISS is to engage the mag release with the support hand thumb – using the pad of the thumb, not the tip – and then in a continuous motion, run the hand down the front grip surface and pull the spent magazine out. The idea is that the operator is habituated to deliberately removing the magazine, thus eliminating the “stuck magazine” stoppage that becomes a problem-solving task and takes the mind out of the fight. Every mag is stripped free. Magazines do sometimes drop free, and sometimes don’t – the nature of the polymer body magazine. But it is really a moot issue because the design of the gun requires this workflow. Unlike the AR patterned rifle that allows the support hand to be queuing up a new magazine while the trigger finger is dropping the empty, this is a slower process in my opinion. That said, once you get accustomed to doing it – like anything – it gets pretty fast.

Differences between the carbine and pistol versions are simply the far shorter barrel of the pistol, and the absence of a stock. Vector pistols in centerfire calibers are also available with an arm brace configuration, but it is not known as of this writing if the .22LR will offered with the brace. As tested, I found that the provided sling swivel (in QD mount) is a great way to use sling tension to steady the pistol. The carbine has a telescoping adjustable stock of good quality and comfort, and is also equipped with a free-floating aluminum handguard, complete with M-LOK slots. Both have threaded barrels.

The charging handle of the KRISS Vector .22LR is also identical in design and function to that of the larger caliber siblings. The handle folds neatly against the body of the gun until unfolded to become a very easy to use charging handle. When the handle is pulled back completely, to fully retract the bolt, the thumb is in perfect position to engage the ‘hold-open’ end of the bolt hold/release control. This is a well-thought operation and far superior the AR platform.

Construction of both upper and lower halves are mostly polymer, with steel internal parts where needed. The entire top of the ‘upper’ is one long section of matte-finished metal 1913 Picatinny rail and about 3” of Pic rail is available for use on the lower, just ahead of the support hand grip. KRISS provides a good set of polymer flip-up sights with the gun. The front is elevation adjustable, and the rear is windage adjustable with two apertures for close or distant targets.

The ergonomics of this odd-looking gun are remarkably good. What at first might appear as a thick and bulky weapon quickly becomes comfortable and instinctive to use. The grip is a comfortable Magpul style grip. The trigger is steel and feels solid and decisive – with a crisp break and very tactile reset. There is a slight amount of take-up before the break, and maybe a hint of overtravel – but this is a battle rifle design and, on that scale, it is among the best triggers I’ve used. Controls are all very well placed and function perfectly. After a short time, it becomes apparent that this gun was designed to be a tool to serve its operator. Bolt controls are as good as any I’ve ever used – and better than most. Getting two gloved fingers on the charging handle is easy – as is the operation of all other controls.

I was surprised how easy it was to shoot the pistol version of the Vector when held as a pistol. With a standard two-hand pistol grip, the gun is light and balanced enough to present a steady sight picture and shooter fatigue is minimal. When I used a single-point sling as a tension device, it was even easier. The carbine provides adequate adjustments to the stock and a good cheek weld, while the aluminum handguard makes for a comfortable alternate grip position.

Banging steel plates just inside 20 yards was easy work with both guns, and 50 yard groups with the carbine stayed well inside 4-inches with both CCI Mini-Mag and Winchester ammo.

If you have a KRISS Vector in one of the larger pistol calibers, the .22 version makes great sense as a much lower cost trainer. Feel and function are identical to the larger bore version, making it a great way to develop muscle memory. And if you are just looking for the most outrageous plinker you can find – this is one that goes on the short list. Reliability was excellent – especially when considering how finicky .22 ammo can be, and accuracy is very respectable. Pricing for the pistol version of the Vector 22 is not available as of this writing, but should be in the same ballpark as the attractively priced CRB at just $675.00.

On a personal note, I own a KRISS Vector in 10mm that I have had for several years. The .22LR version of the gun is built with identical quality and workmanship. They are available in three polymer colors: black, flat dark earth, and Alpine white.

Florida Is About to Get Hammered by Hurricane Ian. Let’s Pull Together.