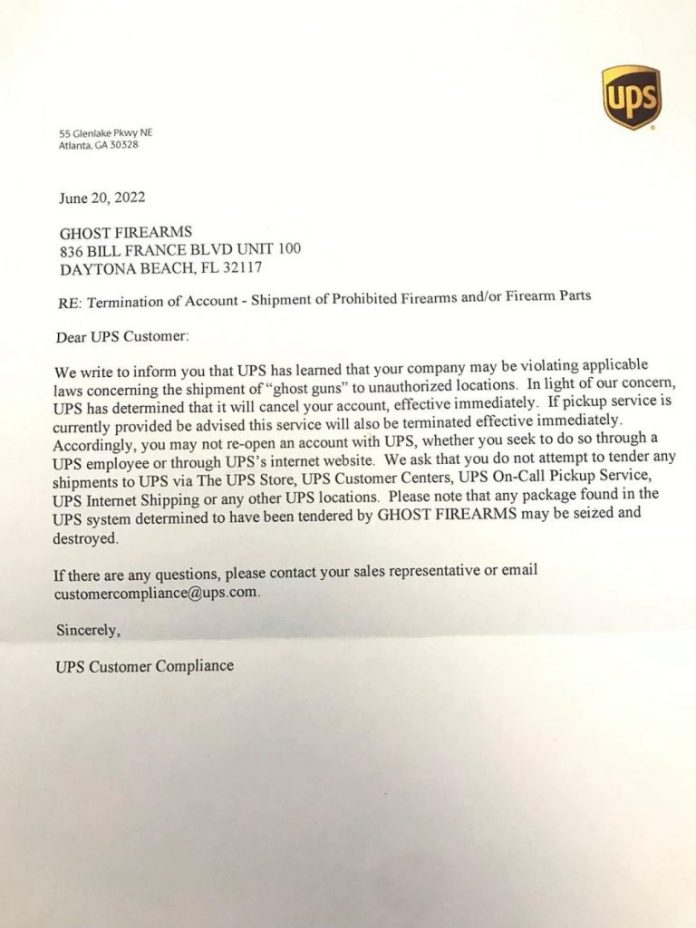 “UPS’s policy now clarifies that the company does not accept any firearms, frames or receivers, or partially complete, disassembled, or nonfunctional frames or receivers (as defined by the new federal regulation) unless those items have been identified and given a serial number in compliance with federal requirements,” UPS said in a statement obtained by Vice News.

“Heads up! UPS has made the decision to no longer accept Brownells’ packages. We are working to put an email together to send to customers who have their account defaulted to UPS, or who have open orders with UPS selected as the carrier,” Brownells informed its customers in a Facebook post.

“We write to inform you that UPS has learned that your company may be violating applicable laws concerning the shipment of ‘ghost guns’ to unauthorized location,” the letter states.

“In light of our concern, UPS has determined that it will cancel your account, effective immediately. Please note that any package found in the UPS system determined to have been tendered by GHOST FIREARMS may be seized and destroyed,” the letter continues.

Zatar is reportedly concerned about packages he has already shipped to customers.

“We do not ship to states where they’re not allowed,” Zatar added. “We are in total compliance. We had ATF in here just two weeks ago, and they told us we were completely legal.”

UPS Media Relations has not responded to telephone calls and emails seeking comment on their new policy, according to SAF.

WaterBrick vs AquaBrick – Which is the Best Water Storage Solution?

Preparing your Family to Survive a Disaster

VIDEO: Security guard takes down gunman who entered methadone clinic in Buffalo with an AR-15