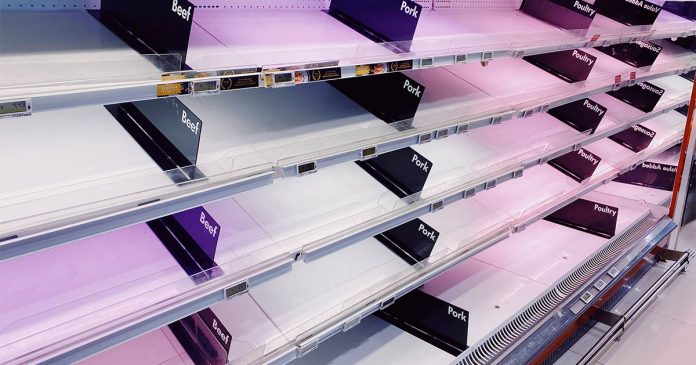 As our economy falls further into the abyss, with inflation pushing gas and food costs to record highs and Americans still refusing to go back to in-person work environments, people are now resorting to taking our microloans in the latest Ponzi scheme to keep the American Dream alive.

Sadly, the house of cards seems ready to collapse as these microloans are not for buying the usual consumer goods and electronics but instead are being used to be able to pay for a tank of gas or to put food on the table.

Earlier this week, Bloomberg reported that Swedish fintech company Klarna Bank – which in the past primarily lent money for smartphones and other consumer electronics – has seen a flood of applications for staples such as food and gas. The fintech bank provides interest-free loans that allow people to spread payments out over multiple installments. As a result, they make money charging retailers a small per-transaction fee and interest on longer-term loans.

“I noticed that I could buy essentials with it and not have to pay everything upfront. And it wouldn’t affect my pocket as much,” said Linda Cruz, a 37-year-old mother of four from a small town near San Antonio, Texas.

Linda Cruz, a mother of four from a small town near San Antonio, Texas, says she started out using Klarna’s interest-free loans for occasional, large purchases — like a new air conditioning unit after hers died during a heat wave last summer. But as prices started to rise for essentials, she started using it for groceries, too.

Be Prepared: This worst is yet to come!

With inflation now officially at 8.6% — of course, we know the actual number is much higher — and food prices rising the fastest in 40 years, Americans are hitting a breaking point. Credit card debt, which dropped during the pandemic as Americans used government stimulus checks to pay down balances, has rebounded to all-time highs.

Prices expected to go much higher!

Patrick De Haan, head of petroleum analysis at Gas Buddy, says, “Next time you go to the grocery store or the hardware store, you buy something online, you’re going to pay for it. Or I should say you’re gonna pay much more for it, given the fact that diesel prices now we’re approaching $6 a gallon for a national average.”

The New Normal was always about crashing the American Dream

As we talked about numerous ties during the so-called pandemic, there is a reason they kept using the words “a new normal” in all of their reporting. They were conditioning the public to accept this crap and trying to dull your senses so you wouldn’t fight back!

This morning, CBS News began running segments telling younger Americans to reconsider moving out on their own, and instead stay with their parents!

CBS tells Americans to put off purchases and to continue living with their parents to handle rising prices under #Bidenflation pic.twitter.com/WUzB1cjWW8

Well before the global coronavirus hype hit, we were warning our readers about the very real dangers we were in and how fragile our food distribution systems had become. Unfortunately, we are seeing many of our predictions come true as supply chains throughout the world break down, and people are starting to struggle to find basic necessities.

One of the things we warned about was the coming food riots, and how people are going to start losing their minds once they see how bad things really are. In many areas of the world, those food riots and uprisings have already started.

Citizens are protesting in Kenya’s Capitol against corruption, inflation, rising prices of basic goods. Prices of cooking oil, corn flour, wheat and sugar have doubled in the last month. pic.twitter.com/xOoldDmsDl

🇵🇦 #Panama The fourth day of strikes and demonstrations in Panama. Inflation has hit the country, and people are coming out against rising prices for fuel, food and the cost of living! pic.twitter.com/HzQY7XFJ3p

It seems the people of Argentina are now rising up, in Buenos Aires, against their government’s economic policies.

Huge protest in Albania demanding the government to resign. Food prices in Albania increased by double digit percent since a month ago. Inflation isn’t transitory. pic.twitter.com/wFC94WoLLe

While the mainstream media refuses to cover the chaos, food freedom movements, shortage riots, and protests against destructive climate policies are becoming a global movement. For example, the freedom farmer protests in the Netherlands have now spread to Germany, Poland, and Italy, and protests and even uprisings against governments have spread to other areas of the world.

Polish farmers also rise up in Warsaw: “That’s enough! We won’t let ourselves be robbed!” They accuse the political class of destabilizing production by raising interest rates, which does not stop inflation: “We workers cannot pay for the crisis created by the politicians!” pic.twitter.com/waEUoO5zrs

IT’S HAPPENING 🇮🇹: Italian farmers are rising up in protest, threatening to take their tractors to Rome. “We are not slaves, we are farmers! We cannot make ends meet!” pic.twitter.com/FAznWFXmM0

There will be Riots on the Streets!

As we’ve been warning for over a decade, high population density areas will be the hardest hit. These areas rely on a constant flow of goods that must be shipped in on a regular basis. Once the supply lines stop, and these areas cannot fulfill people’s basic food and water requirements, all hell WILL BREAK LOOSE!

There will be riots in the streets, and that’s probably majorly understating what will happen!

Be Prepared to Feed Yourself when the Collapse Hits!

I advise having no less than two weeks’ worth of food and water.  Once you hit that goal, you should set a goal for 3, 6, and 12 months’ worth of food.

Here are some Grocery Options that ship right to your Home:

Be Prepared to Defend Yourself

While the world might be filled with millions of good and decent people, during a prolonged food crisis,  people will quickly become unpredictable. Your once jolly neighbor is going to become a raving madman when he finds our he can’t feed himself and his family. You need to be prepared and know how to defend yourself from those that failed to prepare.

Learn to Be Self-sufficient NOW!

Preparing for a food crisis is much more than stockpiling food.  To be prepared, you need to learn how to be 100% self-sufficient. This means learning how to grow your own foods, studying the wild edibles in your area, and learning how to hunt, fish, and trap your own food.