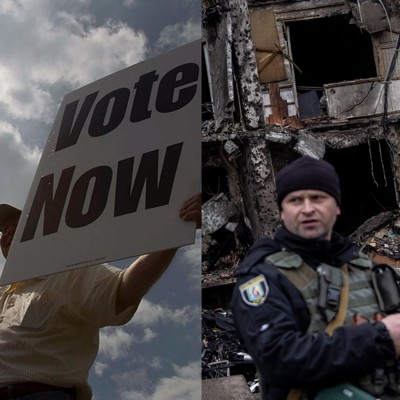 U.S. military aid for Ukraine could dry up if Republicans retake control of the House or Senate in the November midterm elections, conservative analysts predict.

Nearly five months into the Russian invasion, support for U.S. military and financial assistance to Kyiv is shrinking among the GOP’s right-wing base, a group that has been primed by its leaders and top media personalities to oppose the Biden administration’s plans for American intervention or even side with Russia’s illegal invasion. With Russia pausing its most recent offensive in Ukraine’s east to reset and rearm its frontline forces, some observers wonder just how much longer Americans–especially right-wing voters and lawmakers–will fund a costly stalemate bewteen Kyiv and Moscow. Few predict Ukraine can win without significantly more firepower, ground forces, or direct military involvement by NATO-member neighbors. Should the GOP win control of Congress, whether the United States continues to arm Ukraine could depend on who controls the policy and pursestrings: the internationalist moderate Republican leaders sitting atop key committees or isolationist far-right party superstars.

In May, Congress approved $40 billion in weapons and military and economic assistance for Ukraine by an overwhelmingly bipartisan vote, with only 57 Republicans voting against the package in the House and 11 voting no in the Senate. Because it passed so quickly, some analysts say Republican lawmakers were not fully aware of GOP opposition to the aid at the time of the vote. Since then, party sentiment has shifted, as influential conservative groups ramp up their messaging.

“The vote in the House was fairly successful given the fact that most of the reaction in the grassroots happened after,” said Russ Vought, president of the Center for Renewing America and former director of the Trump administration’s Office of Management and Budget. “If it happened today, I think you’d have 100 Republicans opposed to it, and much more GOP in the Senate as well.”

Ukraine is rapidly exhausting the ammunition sent by the West. Ukrainian forces are using tens of thousands of shells per day, France 24 reported on Thursday, as the defense of the Donbas rages on and the war becomes one of attrition—where the victor is likely to be the nation with the biggest stockpiles.

In Europe last month, President Joe Biden promised the United States will support Ukraine “as long as it takes.” Other world leaders expressed similar confidence in the long-term commitment of the United States, no matter the outcome of the midterm election.

“I don’t think the major position of the United States will change about Ukraine,” Slovakian Defense Minister Jaroslav Nad told Politico. “I think it’s quite clear to the whole democratic world what is actually happening in Ukraine and that we need to help the Ukrainians, so I don’t expect any significant changes, whatever happens after the midterm election.”

That view is “a bit naive,” said Dan Caldwell, vice president of foreign policy at Stand Together, a network of nonprofits funded in part by Charles Koch, as some parts of the Republican caucus shift toward an America-first view, and away from the more traditional interventionist foreign policy views that dominated the party for decades.

Some Democrats are warning that a Republican-controlled Congress puts aid to Ukraine in the crosshairs.

“Fact is if the Republicans take over the House in 2022 US support to Ukraine will come to a halt,” Rep. Ruben Gallego, D-Ariz., tweeted last week. “They will not be able to stop @RepMTG & @mattgaetz from dictating our Ukraine policy,” referring to two of the GOP’s most extreme isolationist personalities, Rep. Marjorie Taylor Greene, R-Ga, and Rep. Matt Gaetz, R-Fla.

The push to give aid to Ukraine started out as a very bipartisan one, with many Republican leaders in foreign-policy calling on Biden to do more to arm troops in Kyiv, including Senate Minority Leader Mitch McConnell, R-Ky., and Sen. Joni Ernst, R-Iowa, a veteran who sits on the Armed Services Committee.

But far-right GOP leaders and personalities from Trump’s camp have not relented their opposition to U.S. involvement in the conflict. As the war continued, Republican support for helping Ukraine began to fracture. Some GOP senators criticized the administration for sending so much money abroad instead of focusing on domestic issues—including inflation and supply chain shortages—but others did not support the aid because of other concerns, such as inequitable burden sharing with European allies, a lack of oversight over the money once it reached Ukraine, and a desire for offsetting domestic spending reductions.

Vought said his organization shares some of these concerns, including the fact that America has sent the most aid to Ukraine, even though the war is happening in Europe’s backyard. Vought also noted Russia’s inability to score a decisive victory in Ukraine proves the military is not as strong as the West once thought, and argued that Ukraine has no incentive to end the war through negotiations as long as they have a blank check with no expiration date from the West.

“At the beginning, there was a bum rush by neoconservatives using everyone’s outrage at Putin and Biden’s inability to project strength,” he said. “I think the outrage of that moment has settled into a realistic assessment of where we are, and that is: we can’t be in a situation where we are telling a country like Ukraine that was once a part of Russia ‘as long as it takes.’”

“You have to think through, do you have concerns with the package going to Ukraine, or do you just not like the process?” he continued. “We don’t like the process, but our main fundamental concern is we don’t subsidize a government that’s told ‘as long as it takes.'”

The Biden administration will need to ask Congress for another supplemental funding bill for Ukraine at some point. Since lawmakers approved the $40 billion in aid in May, the White House has announced more than $3 billion in weapons shipments, but the supplemental also includes money for humanitarian and economic aid, plus plans to replenish American munition stockpiles depleted to support Ukraine.

If the next large request comes after January 2023, the Biden administration may face an uphill battle. Republicans are “favored” to win the House in November, according to FiveThirtyEight projections. The Senate, however, is rated a “toss-up.” Among those seats in Congress, the small but growing “America First” wing of the Republican party has been critical of sending aid to Ukraine. Greene has called the aid a “money laundering scheme.” Rep. Jim Banks, R-Ind., called on Congress to give every American a $1,000 stimulus check instead of sending money to Ukraine. Sen. Josh Hawley, R-Mo., also voted against the aid.

“Nation building in Ukraine is a major mistake, just like it was in Afghanistan and Iraq,” Hawley said in a statement to Defense One on Thursday. “Our European allies must do more for their own security and we must focus our national security efforts abroad on countering China, and at home, on our southern border.”

Several candidates who share these views and are backed by Trump are on the ballot this fall. J.D. Vance, who is running for the Senate in Ohio, earned wide praise and criticism when he said he doesn’t “really care what happens to Ukraine one way or the other,” and then walked back the statement. Blake Masters, who is running for the Senate in Arizona, said that “geography is real. Ukraine is crucial to Russian security, not to ours.”

“This is a European problem invited by weakness and magical thinking. It should cause Europeans to wake up to the reality of a dangerous world. But we cannot let it become a world war,” Masters tweeted in March.

But many other Republicans, including those in congressional leadership positions, reject the Trump wing. Last month, Sen. Jim Inhofe, R-Okla., the top Republican on the Senate Armed Services Committee who is retiring after this term, urged Biden to spend the supplemental money faster and to send more advanced weapons systems to Ukraine. McConnell has also publicly countered that the aid to Ukraine is “not some handout.”

Some more traditional Republicans are starting to disagree with these mainstream leaders. Sen. Marco Rubio, R-Fla., voted for the more than $40 billion aid package in May, but said afterward that Biden “should not assume Congress will rubber stamp his next request” if the president cannot defend why spending in Ukraine keeps Americans safer at home. Sen. John Cornyn, R-Texas, also voted in support of the supplemental spending, but has since retweeted opinion pieces that are critical of open-ended support, including one titled, “We Can’t be Ukraine Hawks Forever.” Cornyn tweeted one line from the story: “And just as urgently, we will need to shift some of the burden of supporting Kyiv from our own budget to our European allies.”

Stand Togehter’s Caldwell said, “Because of this sea change that’s occurring on the right around foreign policy, a Republican Congress may not be reflexively supportive of more aid to Ukraine or larger security commitments to Europe.”

Beyond Washington, polling shows most Republicans do not support increased American intervention in Ukraine and a greater share of Republicans than Democrats oppose direct U.S. troop involvement. Sixty percent of Republicans oppose sending U.S. troops to Ukraine, compared to just 36 percent of Democrats, according to a Concerned Veterans for America poll released July 1. More than 4 in 5 Republicans also have an unfavorable view of how Biden has supported Ukraine so far.

“Skepticism of more intervention abroad is likely going to continue to increase on the right,” Caldwell said. “The assumption was the invasion of Ukraine was going to kill the noninterventionist strain that’s emerging on the Right, the polling and recent votes on Ukraine aid shows that’s not true.”

America-first Republicans overwhelmingly say they do not support helping Ukraine because they don’t support long-term help for a foreign government. Others in the party who are more fiscally conservative  have raised objections over the cost.

Even conservative organizations once at the heart of national security policy are struggling to thread the needle of supporting Ukraine while demanding restraint. Heritage Action, a conservative advocacy group affiliated with the Heritage Foundation, lobbied against the last aid package because of its price tag and scope, but supports more limited aid to militarily support Ukraine, according to a spokesman for the group.

“If there’s a second supplemental, we’ll come out against it if they don’t offset the spending, but that doesn’t mean we’re against Ukraine,” said James Carafano, a vice president and fellow at the foundation.

Ken Young, inventor of the SIEGE Belts passed away.

US says getting arms to Ukraine ‘as rapidly as possible’