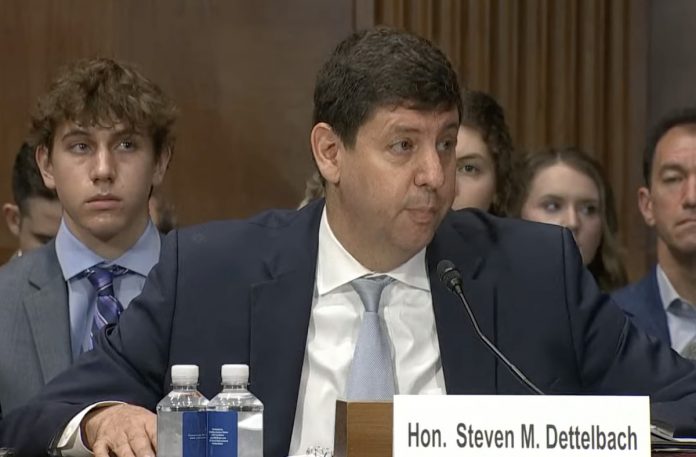 This week, the Senate confirmed Steven Dettelbach, President Biden’s choice, to run the Bureau of Alcohol, Tobacco, Firearms and Explosives (ATF) by a 48-46 vote.

The ATF has been operating under a series of acting directors since its last Senate-confirmed leader (B. Todd Jones) stepped down in 2015.

Dettelbach formerly served as the U.S. Attorney for the Northern District of Ohio under President Barack Obama for over six years until resigning in 2016. During his time as a U.S. Attorney, he focused on making civil rights enforcement a priority.

CNN reports that Dettelbach, “[d]uring his confirmation hearings, . . . vowed he would not be influenced by political considerations, saying he is dedicated to upholding the law free from political interference and would do so in the post of ATF director if confirmed.”

“Politics can play no role in law enforcement. None at all,” Dettelbach said at the time.

“I have lived that credo and I vow to continue to do it because people need to have confidence that people in law enforcement’s only agenda is to enforce the law — and if you’re at the ATF to catch the bad guys and protect the public,” he said.

“I vow to never let politics in any way influence my action as ATF director,” he added.

President Biden originally nominated David Chipman for the ATF post. Chipman’s nomination was withdrawn after concerns arose regarding his past record on gun control.

At least one pro-gun group doesn’t believe Dettelbach’s record on the issue is any better than Chipman.

The Senate failed the People today. By confirming an anti-rights zealot to helm one of the nation’s most infamous agencies, the Senate has all but promised that the ATF will continue, or even worsen, its violations of the trust of the People. https://t.co/xmtQHPl2kF

“The Senate failed the People today. By confirming an anti-rights zealot to helm one of the nation’s most infamous agencies, the Senate has all but promised that the ATF will continue, or even worsen, its violations of the trust of the People,” said the Firearms Policy Coalition in a statement obtained by GunsAmerica.

Here are the votes for the Dettelbach nomination.

On the other side of the gun divide, Everytown for Gun Safety celebrated the development.

“Steve Dettelbach’s bipartisan confirmation vote is a watershed victory for the gun safety movement and further proof that the Senate logjam around this life-or-death issue is finally breaking,” said John Feinblatt, president of Everytown for Gun Safety.

“Dettelbach is a tested prosecutor with strong support from law enforcement, and he can count on Everytown’s full support in the fight to keep our communities safe from gun violence,” added Feinblatt.

Some unseasonably early snowfalls in the American Redoubt region.