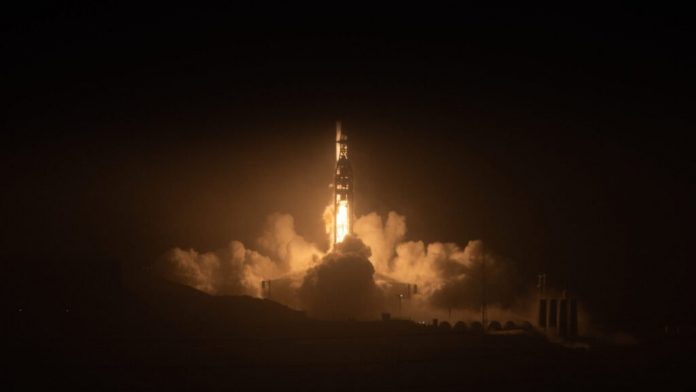 Col. Dennis Birchenough, senior materiel leader at Space System Command (SSC) Environmental and Tactical Surveillance Acquisition Delta, said Monday that the Space Force might not be ready to buy services directly like a typical customer of commercial operators — for example, nuclear missile warning and tracking. But in some of those cases, like tactical ISR, putting payloads on commercial satellites might make sense.

Birchenough is in charge of SSC’s tactical ISR acquisition branch, as well as two other branches dealing with weather data. The Space Force has been (somewhat controversially) considering how it might take on the job of providing tactical ISR, such as imagery, from space — a mission that traditionally has been the purview of the Intelligence Community.

He noted that during SSC’s reverse industry days in May on tactical ISR, officials spoke with a number of commercial firms, including Amazon, SpaceX and Terran Orbital, that are planning to launch “large constellations on the order of thousands” of satellites and might be willing to allow the Space Force to, in essence, hitch a ride for its own sensor payloads.

“Maybe there’s an in-between between building it ourselves and then taking care of the whole constellation and [commercial] providing [data] as a service,” Birchenough told the America’s Future Space Innovation Summit. “Maybe there’s a hosted payload piece in between, because many of those satellites that they’re putting up have a lot of extra space available, a lot of size or electricity and power available.”

Another idea, Birchenough said, is for SSC to serve as a kind of “matchmaker” to pair ISR sensor developers with commercial operators with capacity to carry payloads extraneous to their own capabilities.

“So, we are definitely thinking of … providing sensors, or being a matchmaker between two companies, one that might have a sensor and one that might have some some space available and pair them up. And then we get to leverage the data link,” he said.

Birchenough stressed, however, that the Space Force is not ruling out what is known as “commercial as-a-service,” but rather is still assessing what missions and where that might be the most suitable approach. He reiterated the acquisition strategy put forward by SSC commander Lt. Gen. Michael Guetlein, characterized in the latter’s words as “buy before we build.”

For example, he noted that SSC, as Breaking Defense reported in January, has put out a request for information (RFI) to industry to explore the idea of buying commercial weather data services. Industry responses to that RFI were due in February, with the Space Force tentatively planning to begin optioning data in 2025.

Senior Pentagon officials have been talking for several years about simply buying services, like individuals buy a cell phone plan, from commercial satellite communications providers, and more recently of applying the same model to other missions such as remote sensing and/or space situational awareness. Progress on that front, however, has been slow.

Gun Meme of the Day: He’s Got a Point Edition

The Deer Woods Reacts To Our Rain Spell – Bowhunting.Net