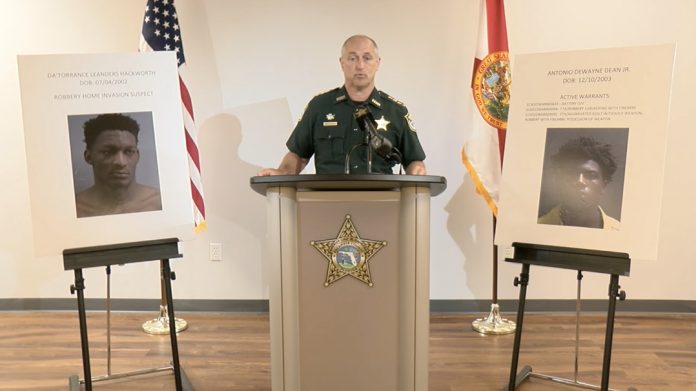 There will be “absolutely” no charges for a Florida man who used an AK-pattern rifle to defend himself from a trio of home invaders.

Escambia County Sheriff Chip Simmons made that clear at a recent press conference about the incident that occurred around midnight on July 7.

“Those of you who may ask a question, is the homeowner going to be charged for shooting at these people? Absolutely not,” the sheriff said. “The homeowner’s protecting himself, and in Florida, in Escambia County, you can protect yourself.”

Simmons said the perps were armed when they forcibly entered the victim’s home.  One of them pointed a handgun at the homeowner and the two others shoved him to the ground.

The victim had a pistol on his person but it was knocked to the floor when the suspects pushed him down.  During the subsequent scramble, the victim was able to escape to the back of the house and retrieve his AK-style rifle.

At that point, the victim opened fire on the suspects.  All three fled the scene.

“We get a report of a third individual that had a wound to the head not long after [the home invasion]. The stories he’s giving us as to how he got shot in the head are inconsistent at best. In short, we don’t believe him. So what we’re looking at is to determine whether this is the third person involved,” Simmons said.

The third individual was not identified during the press conference.

Dean is a wanted criminal, with active warrants for carjacking, aggravated assaults with a firearm, robbery with a firearm and domestic violence battery.

“I’m not sure why he’s out of jail,” Simmons said.

Authorities announced that they arrested Hackworth on July 11.  It appears Dean has yet to be caught.

Stay tuned for updates as this story is still developing.

How To Choose A Crossbow Scope? 4 Expert Advice