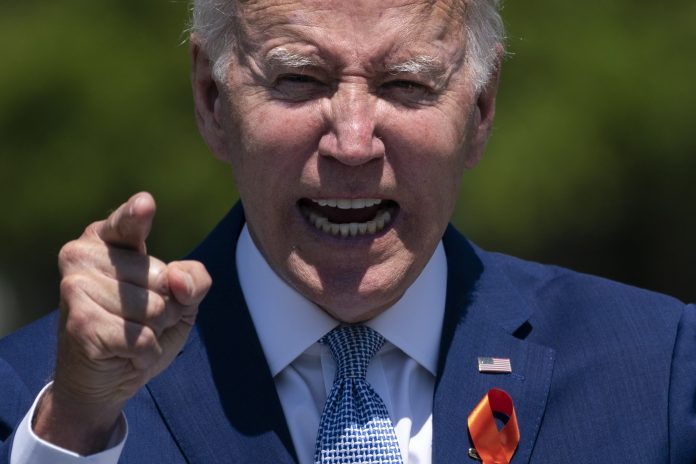 “We’re living in a country awash in weapons of war,” the president said. “I am determined to ban these weapons again, and high capacity magazines that hold 30 rounds, and let mass shooters fire hundreds of bullets in a matter of minutes. I’m not going to stop until we do it.”

That’s the same 10-year federal ban on both modern sporting rifles (MSRs) and magazines with a carrying capacity over 10 cartridges that the Centers for Disease Control and Prevention (CDC) concluded did little to nothing to reduce crime.

The Department of Justice (DOJ) found in their own assessment that if the ban is renewed, the “impact on gun violence is likely to be small at best, and perhaps too small for reliable measurement.” That’s because the DOJ’s annual Uniform Crime Report (UCR) consistently shows that murders from all rifles – not just MSRs – are less than that of murders committed with knives, clubs and fists. Even the left-leaning Politifact rated that “Mostly True” after parsing the data and noted that some murder reports don’t include the type of weapon used in a murder.

But facts and the Constitution be damned. President Biden wants his failed solution back and he wants it now.

President Biden, speaking in The White House Rose Garden, claimed the recent Bipartisan Safer Communities Act was “real progress, but more has to be done.” He blamed the firearm industry for indifference, saying, “We all know a lot of the reasons: gun lobby, gun manufacturers, special interest money, the rise of hyper-partisan tribal politics in the country where we don’t debate the issues on the merits and we just rather turn on each other from our corners and attack the other side.”

That ignores the reality. The firearm industry has been leading on bringing true gun safety to the forefront. The Real Solutions. Safer Communities campaign includes Department of Justice (DOJ) and Bureau of Alcohol, Tobacco, Firearms and Explosives (ATF) partnerships to prevent illegal straw purchases and improve security at firearm retailers.

The firearm industry’s Project ChildSafe initiative has provided over 40 million free firearm safety kits – including locking devices – for over 15,000 law enforcement agencies in all 50 states and five U.S. territories. It was NSSF’s leadership on FixNICS that inspired the Fix NICS Act, which compelled federal agencies and incentivized states to submit all disqualifying records to the FBI so the National Instant Criminal Background Check System (NICS) is accurate.

But the president ignores all of that. Instead, he spreads fear and fumbles through the facts. He claimed, “A 9mm bullet blows the lung out of the body.” That followed his previous demands that 9mm handguns – among the most popular sold today – should also be banned.

Now, Vice President Kamala Harris is pushing for a ban on any firearm that’s “intentionally designed to kill.” A remarkable statement coming from a lawyer who served as her state’s attorney general and on the U.S. Senate Judiciary Committee.

Perhaps she hasn’t had time to read the Bruen decision in which the Supreme Court held – again – that the Second Amendment protects the pre-existing right to keep and bear arms for self-defense.

The Biden administration is ignoring the fact that Americans – of all races, creeds, colors and all walks of life – are purchasing firearms in record numbers. Over 14 million Americans purchased a firearm for the first time in 2020 and 2021. Background checks for the sale of a gun shattered previous records in 2020 at over 21 million. Another 18.5 million were completed in 2021. For 35 months straight, there have been over 1 million background checks for gun sales.

A recent NPR/Ipsos poll showed that not even half of gun owners would entertain the idea of a ban on MSRs.

Jerone Davis, an African American pastor running for Congress in Arizona, released a television ad showing why Americans need the choice to protect themselves and their families with MSRs.

“Democrats like to say that nobody needs an AR-15 for self-defense, that no one could possibly need all 30 rounds,” Davis explains in the video. “But when this rifle is the only thing standing between your family and a dozen angry Democrats in Klan hoods, you just might need that semi-automatic, and all 30 rounds.”

President Biden wants to eliminate that choice. Vice President Harris wants anything that could kill to be banned. The guns are the first part. What they really want to control is you.

Fawns Are Coming On Down – Bowhunting.Net