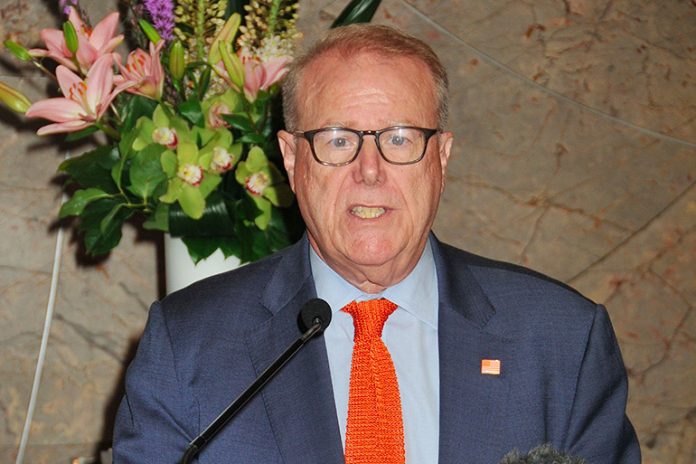 The classic definition of the word ‘chutzpah‘ has always been someone who kills his own parents, then throws himself on the mercy of the court because he’s an orphan. Yesterday, a prominent new example of chutzpah was on display in The Hill where Everytown for Gun Safety president John Feinblatt tried to take a victory lap despite having just suffered the worst defeat for gun control in generations.

Michael Bloomberg’s main minion, who oversees Everytown as well as the hoplophobic harridans at Moms Demand Action, penned an op-ed to rally the troops on the day that our superannuated president held what amounted to a pep rally at the White House to celebrate the passage of the first gun control bill in decades.

Feinberg hailed the Bipartisan Safer Communities Act as a great victory for the cause of “gun safety” and claimed that the passage of the Cornyn-Murphy gun control bill is evidence of the gun control industry’s long-sought dominance over the National Rifle Association.

Feinberg attributes the big win to superior grassroots organizing (aided, of course, by billions from Bloomberg).

[A]fter Bloomberg left office, we joined forces with the grassroots gun safety group Moms Demand Action and created Everytown for Gun Safety. Together, along with Students Demand Action, Everytown now has nearly 10 million supporters, which makes us double the size of the NRA. But we’re not just bigger than the NRA — we’re also louder. In the runup to the vote on the Bipartisan Safer Communities Act, Republican Senator Todd Young (Ind.) reported receiving 10 constituent calls in support of the bill for every one call against. He ended up voting for the bill.

Set aside the fact that the NRA has 4.5 million actual paying members while Feinberg’s 10 million is comprised of ‘likes’ and followers on social media. He actually has the cojones to take credit for the natural cycle in America’s electoral politics that has been a fact of life for more than half a century. Namely, the party of the current president loses seats in Congress in midterm elections.

Feinberg credits himself — and his boss’s money — for this naturally occurring phenomenon in 2018 . . .

A turning point came in the 2018 midterms elections when Everytown outspent the NRA by nearly $14 million. The NRA, recognizing its own toxicity, scrubbed its website of all candidate grades. But that wasn’t enough to save them from a big electoral loss — in federal races, Everytown-endorsed candidates defeated NRA-endorsed candidates 77 percent of the time.

Finally, Feinberg claims that he and his fellow civilian disarmament advocates have worked like beavers to “chip away at the NRA’s brand” . . .

We set about exposing the gun lobby’s incompetence, corruption and hypocrisy. The nation’s regulators have taken note, and today’s NRA is spending more money on legal fees than political campaigns.

Bloomberg may have spent megabucks to try to further the cause of limiting Second Amendment rights in the United States in the last decade, but no one has done more to sully the brand of the National Rifle Association and drain its resources than its own executives and board. Feinberg trying to take credit for that is downright laughable.

In other words, in his op-ed Feinberg is unironically attempting to take credit for both normal electoral cycles that have been a fact of political life since World War II and Wayne LaPierre’s grasping greed and corruption.

What he fails to mention at all, though, is that, aside from a handful of prominent, desperate redoubts, individual gun rights in America have never been in a stronger position.

Law-abiding citizens in half the states no longer have to go, hat in hand, asking a government functionary for permission to carry a firearm. Americans have been buying guns — millions of them for the first time in their lives — at a record pace for more than two years. The number of people who own a gun and value their right to do so has never been higher.

Oh, and then there’s the Supreme Court’s Bruen decision, the biggest victory for gun rights in America in living memory. We probably don’t have to remind Mr. Feinberg that particular lawsuit was brought and financed by the National Rifle Association’s New York affiliate. So while the NRA may not now be quite as big or as powerful as it has been in years past — due in no part to Feinberg or anyone outside the NRA — reports of the death of the association’s power and influence have been greatly exaggerated.

What Feinberg conveniently excludes from his op-ed is the fact that the Bruen ruling will be — in fact already is — the basis for challenging and probably toppling a range of gun control laws that have stood for decades.

Laws such as “assault weapons” bans, magazine capacity limits, open carry bans, gun owner registration, firearm purchase waiting periods, bans on gun sales to adults under 21, and many more are now in serious legal jeopardy thanks to the Court finally treating the rights guaranteed by the Second Amendment as equals to other enumerated rights.

But Feinberg can’t really talk about all of that. It might discourage the troops.

Instead, his job now is to try to keep morale up and the dollars flowing into the Civilian Disarmament Industrial Complex (aside from Bloomberg’s bucks which are, of course, secure). That’s why he’s claiming credit for “victories” he had no part in and cheering a gun control bill, parts of which will itself be challenged and likely ruled unconstitutional under Bruen.

It’s a sad little display when you think about it, but it’s all he really has right now.