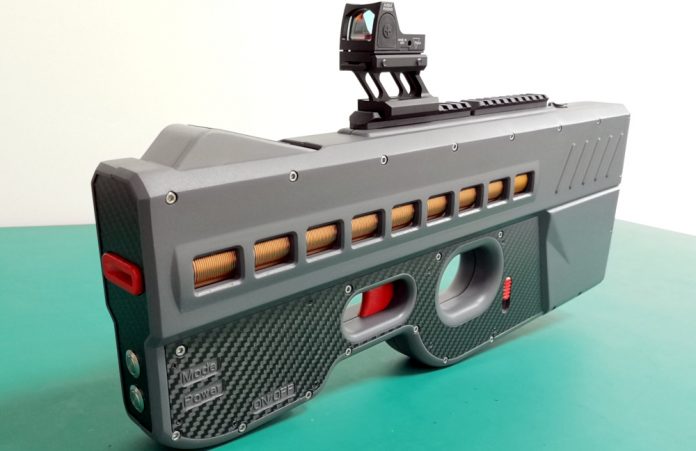 The North Shore Sports Club is once again taking orders for their Coil Accelerator, a battery-powered, full-auto-capable disk launcher. North Shore’s coil gun isn’t the first of its kind, but it’s smaller than most and offers a number of different firing modes.

With a selectable power rating between 3 and 16 joules — a max of about 12 foot-pounds — this coil gun is about as powerful as an entry-level BB gun. But it has a couple of cool party tricks, full-auto mode firing at 600 rounds per minute and a blazing fast 5-round burst at 2,400 RPM.

It fires reusable 275-grain metal disks and has a magazine capacity of 50 disks. It takes an hour to charge to full power and a charge is good for an estimated 500 shots depending on how it’s used.

The coil gun has an effective range of 20 to 30 feet and a maximum range of 40 feet. Since it’s not a firearm or even an air rifle it’s largely unaffected by any regulations.

The North Shore Coil Accelerator was originally launched in late 2021 and sold out relatively quickly, even with a list price of $1,600. Additional magazines run $20 and it ships with one mag and 150 disks.

It’s a novelty but clearly good fun for people who are interested in getting into the emerging coil gun scene with a backyard blaster.

The North Shore Coil Accelerator has other advantages, too. It’s practically silent, it produces no muzzle flash, it doesn’t produce any smoke or gasses, it doesn’t have any real felt recoil and it doesn’t need cleaning.

Still, its price is up there, but there will always be kids of all ages who want the coolest gadgets on the block. All it needs is a set of sights or a red dot and it’s good to go.

For more information check out the North Shore Sports Club.

How to Make a Smokeless Fire

In Iran Nuclear Talks, the US Has No Good Plan ‘B’