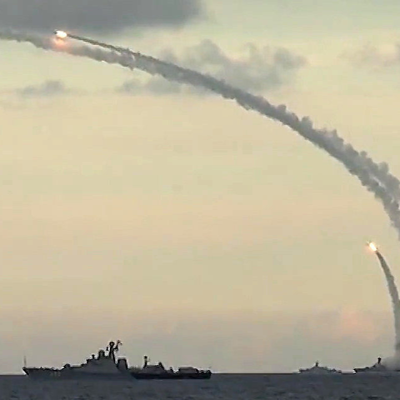 The United States is not prepared to defend itself from the types of cruise missiles Russia has increasingly used to attack Ukraine, warns a new assessment from a prominent Washington think tank.

The report from the nonpartisan Center for Strategic and International Studies argues that military commanders and policymakers have ignored the protection of the continental United States from these low-flying, maneuverable weapons. Instead, they’ve poured billions of dollars into siloed interceptors that protect the homeland from higher-flying missiles and into mobile systems to defend forces deployed in other regions of the world.

“A lesson from the war in Ukraine is that weapons and sensors of the past can have effective uses even in the face of a high-end adversary,” the report states. “Rather than scrapping or mothballing older systems, integrating data feeds and shooters into a new homeland defense architecture can strengthen the overall defense.”

Lawmakers and military commanders have become increasingly concerned in recent years about a cruise missile attack on the United States. Unlike intercontinental ballistic missiles, which fly along high, predictable trajectories, cruise missiles fly low so that radars are unable to detect their presence. The weapons could be launched discreetly from submarines lurking just offshore.

“Within an increasingly broad and diverse air and missile threat spectrum, the ubiquitous land-attack cruise missile lies at its center,” the report states. “Emerging hypersonic missile threats garner significant attention, but garden-variety cruise missiles represent one of the most underappreciated, high-capacity, and near-term threats to the U.S. homeland.”

Pentagon officials began sounding the alarm about the cruise missile threat to the United States over the past decade, but there has been little movement in bolstering defenses. The Army began using an aerostat north of Baltimore to track planes along the east coast, but those efforts were abandoned after the blimp broke free of its mooring in 2015. The heavy cable knocked down power lines before the blimp came to rest in Pennsylvania.

In 2019, the Trump administration’s Missile Defense Review pointed to the rising cruise-missile threat, however, the Pentagon has yet to put anyone in charge of buying defenses, despite being ordered by Congress to do so in 2017, the report states. That means the nation has had to rely on a patchwork of radars, interceptors, and fighter jets.

In recent months, Congress has approved more than $273 million to develop long-range radars, mount cruise-missile defense experiments, and start to build defenses on Guam, the U.S. territory in the Pacific Ocean that is home to Air Force and Navy bases that are critical to military operations in the region.

The report proposes “five layers” of defenses that include “over-the-horizon radars, towered

sensors, an aerostat, three types of interceptors, command and control operation centers, and a

mobile airborne asset.” The authors estimate it will cost $32.7 billion over the next two decades to buy and operate these cruise missile defenses. Plus, they argue, the defenses could also help protect against fast-flying hypersonic weapons and low-flying drones.

“Even if limited and imperfect, a sufficient and affordable defense can complicate adversary planning and strengthen deterrence,” the report states. “Should the Department of Defense soon designate a military service or agency as the executive agent with authority to design and procure homeland cruise missile defense capability, acquisition efforts could begin in earnest in FY 2024.”

The only missile interceptors in the United States that can shoot down cruise missiles are NASAMS batteries installed around Washington, D.C., to protect government buildings. There are also fighter jets at Joint Base Andrews in the Maryland suburbs that can conceivably shoot down incoming missiles with air-to-air missiles, the report states. Earlier this month, the Pentagon said it would give Ukraine two NASAMS batteries.

There are many radars around the United States that could help track a cruise missile, but they are operated by several government organizations, including the Pentagon, Homeland Security Department, Federal Aviation Administration, and National Oceanic and Atmospheric Administration. These do not currently share their data with one another but if they did, the report says, they might weave a useful defensive net.

“Few if any of these disparate sensors may be able to independently create tracks with their existing algorithms,” the report states. “But all could supply raw data, which when fused with others nationwide and processed through machine learning, could identify anomalous activity and nominate possible tracks.”

The report’s authors say the Pentagon’s work to defend Guam from a missile attack from China, could serve as a test case for installing defense on the mainland.

“While protection of the continental United States poses a different problem, the efforts for the defense of Guam will be especially instructive for element selection, system integration, and command and control development,” the report states. “In this sense, the road to homeland cruise missile defense for North America will go through Guam.”

Man in Mexico Charged After Killing 32 Deer With Dogs