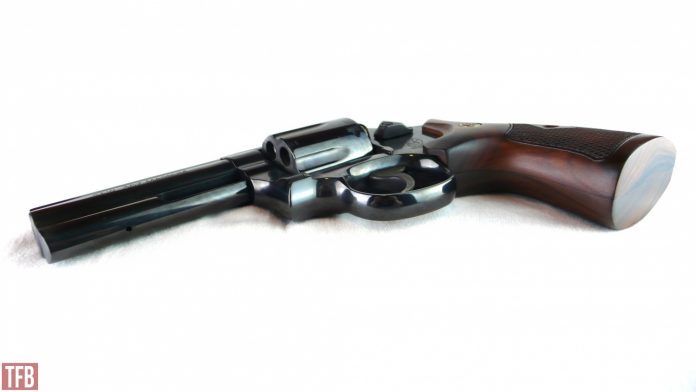 Revolvers seem to be a controversial topic in the gun community, people either seem to love them or hate them, and perhaps there is a segment somewhere in the middle that looks at them historically. On this week’s Wheelgun Wednesday, I thought we’d take a peek at what we at TFB love about revolvers, and we certainly want to hear from our readers about what you love about revolvers as well.

WHAT WE LOVE ABOUT REVOLVERS

I attended a community college that provided a hands-on associate’s degree in Police Science, which included two semesters of firearms classes. At that time, they were still starting everyone out on Smith & Wesson Model 19 wheelguns, then transitioned into the “transition era” semi-autos. I loved the feel of the wood and steel Smiths, and I had an instant appreciation for the historical role revolvers played in law enforcement, militaries, hunting, and for people that wanted to be able to protect themselves. I felt as though I’d been taught to drive the manual transmission of the gun world. By that point, revolvers had begun to wane in popularity, and my graduating class was one of the last groups to shoot revolvers in that program. A few years later, I happened to see a part of the Patlabor anime (nerd alert) which involves mechanized suits, and one of them carried an upscaled revolver. It was at that time, I realized I needed to revisit that hole in my collection. As for the things I love about revolvers, I love that the heavy trigger pull on double-action revolvers is relatively safe as it takes intentional force to set it off, and on the flip side, that the single-action trigger pull is an option for making shots on long-distance targets. I’m not wholly opposed to unfluted cylinders, but I love how the typical fluting on the cylinders adds to the overall aesthetics. I’ve also loved exploring all the different ways of reloading revolvers. I also love shooting revolvers in all types of calibers, but I especially love the extra power revolvers can harness over most semi-automatic handguns. It’s also hard not to feel nostalgic when toting a revolver through the woods and not feel undergunned. I like seeing wheelguns in movies and shows, but I’d rather be shooting one myself! TFB’s Wheelgunners, Adam, Rusty, and Sam also weighed in on what they love about revolvers.

For me, it is the nostalgia of them and their tie to iconic cinema. You think of cowboy revolvers from the “Good, the Bad, and the Ugly.” You look at Dirty Harry with all of his quotes like, “You feel lucky punk” and “this is the most powerful handgun in the world.” Even Dwayne “The Rock” Johnson has been scene toting a Smith & Wesson 629 Competitor with a weighted barrel in the Fast & Furious movie franchise making revolvers cool for car people. Not everyone “gets” the utility, novelty, and simplicity of revolvers, but cinema has always romanticized them and that’s what drew me in as a teenager and now (half joking – thanks a lot Hollywood) why I have a burgeoning wheelgun collection I cannot fully rationalize – and I am OK with that.

Photo by TFB’s Adam S. From his S&W 629 Competitor Review.

It’s multi-faceted.  There’s the fascinating  history of the revolver as the first mass produced and practical multi-shot handgun.  Then there are the extremely robust designs like the S&W X-Frame, Ruger Super Redhawk and the BFR that are marvels of engineering to fire such powerful cartridges.  Lastly, handling a high grade revolver like the MR73, Korth, or Janz is like getting to shoot a Swiss watch-it’s handgun artistry and engineering at its highest level. I grew up on westerns and war movies and the revolver is always a weapon that stands out because it has so much more personality. I love the mechanically satisfying nature. They are sort of a cool window into the past, back when folks were trying to solve the “I want to shoot more and faster” issue. Personally I am a sucker for just about any single action revolver because by habit they have to be old school. If I had to settle on a favorite I am pretty found of the look and feel of the S&W No.3 series of Top Break revolvers. We all seemed to have a sense of the historical and mechanical value, and the media played a role for some of us as well. What about you? What are your favorite aspects about revolvers that hold a special place in your gun safe? Are you drawn to the history, the simplicity of operation but complicated inner workings, or do you just love to feel that power in your hands? If movies or television played a part in helping you find your love of wheelguns, tell us which ones.