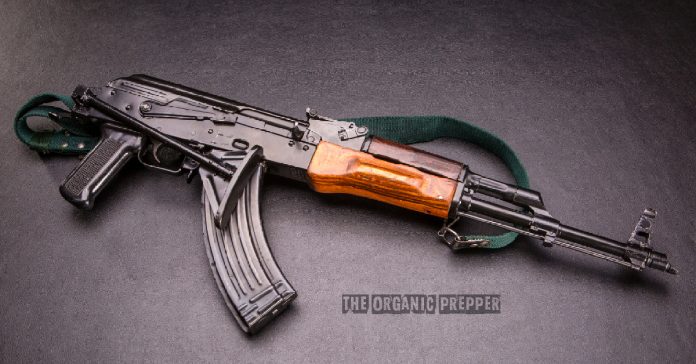 In the comments section of the How to Become a Good Shot article, commenter N Nipp said that “I want more encouragement like this to defend ourselves from marauders during times of disaster, and such.” So today, I wanted to talk about carrying one’s rifle, slings, and the use of slings.

Let’s go back to my island in the sun.

At the rifle range in USMC boot camp at my beloved island, Paris Island, our Primary Marksmanship Instructor (PMI) made a point of pulling out two maggots (recruits) from the platoon. One was a gym rat with well-defined muscles. The other was a bean pole, thin as a rail.

After about 7 or 8 minutes, the gym rat’s arm was shaking. The strain of keeping his rifle at arm level was too much.
The bean pole was just fine.

The point was that using one’s skeleton to support a rifle rather than muscle was more efficient and less taxing. We applied the same concept in marksmanship.

One of the things I have noticed is the trend of the low, tactical carry.

You have seen it. In the Hollywood action movies, our physically fit hero is carrying an M16/M4/AR-whatever at the low, tactical carry as he/she scans for the bad guys/aliens to take a mind-boggling expert shot to the brain housing group without so much as a hiccup.

Have you ever actually carried an M16/M4/AR-whatever at the low, tactical carry for more than a few minutes? I have. Doing so will demonstrate the importance of having a sling.

We were doing a movement exercise, and someone needed to take “point” to assess for mines as our platoon conducted our patrol. The platoon SGT called out for someone to take point . . . no one answered the call.

I said something to the effect of, “Don’t everyone volunteer at once! Fine, I will do it!” I then asked the guy who would be covering me (likely the second guy to die after me if we encountered an ambush/firefight) not to shoot me in the back or arse.

It took us nearly an hour to go a quarter of a mile as I searched for mines in front of the rest of the platoon (I found all 6!). And let me tell you, at the low carry, even with an iron sight M16A2 Service Rifle, that rifle gets dang heavy. It was so heavy that by the time we finished my bicep, forearm, and shoulders were burning.

A few years ago, the wife and I had just finished dinner when I heard a coyote howl just behind the house, 100 to 150 yards give or take. Concerned for the livestock, I went out with a shotgun topped with a red dot sight and a forward-mounted Surefire flashlight. Knowing my experience with the low tactical carry, I opted for the late, great Col. Jeff Cooper’s “Snap Shot Carry.”

What is the Snap Shot Carry?

Place the butt of the firearm at your waist/belt line, on or about the hip, at or just to the left of the top of your pants pocket. Support hand on the firearm’s forearm, trigger hand on the grip. With the rifle at an easy and natural angle in front of you, lower the muzzle, so it is just below your line of sight.

Wherever your eyes go, the muzzle goes. Wherever the muzzle goes, your eyes go. When the threat/target presents itself, you then snap the butt into your shoulder, align the sights/scope and take the shot. Granted, this takes a degree of practice and training.

However, the low tactical carry may be faster. With strained or fatigued muscles, you may not be able to get off a well-placed shot when you need it. Using the Snap Shot Carry, we use our skeletal (hip) to support most of the weight of the rifle, reducing the use of our muscles. Your Support hand still carries the weight of the rifle, but at a much-reduced effort while allowing for movement and scanning.

You do need to understand a thing or two about slings and things.

There are a number of multi-point or single-point slings out there. Some are better than others. Generally, the point behind a sling is to carry one’s rifle. In modern times, not only how to carry the rifle, but then deploy and use the rifle when the situation arises.

As I learned in the USMC, a sling can also make one’s shooting position steadier, namely from the prone, making that first-round hit probability much higher than not. We also used the “hasty” sling from the standing, kneeling, or sitting position.

From the standing, using the “hasty” sling, we wrapped the sling around the forearm of our support arm.
It kinda worked, but only to a degree, as it still only had two points of contact, the forearm and the butt stock in the pocket of the shoulder.

What about the trigger hand, you ask? The trigger hand uses the grip to actuate the trigger. Very little goes into actual support of the rifle itself. When I am looped up in a sling but stock in my shoulder pocket, I can remove my trigger hand and still line up the sights. Try it.

(Want to starve the beast? Check out our free QUICKSTART Guide to doing so.)

That applies to not only shooting field positions (e.g., using a log or tree) but the use of a sling. Col. Cooper identified the use of the sling to not only carry the rifle but how to use it to make one that much more “steadier.”

One of his preferred slings was the “Ching sling,” named after the inventor, Eric Ching. Whereas the “hasty” sling uses two points of contact, the Ching Sling, on the other hand (see what I did there?), uses three points: The sling looped on the upper tricep of the supporting arm, the supporting hand under the forearm of the rifle, and the butt stock in the pocket of the shoulder.

When looped up, the sling really locks the rifle into you. I can easily remove my trigger hand and still sight in on a target. I could also shoot from the sitting and pone, with only minor adjustments, mostly of my support hand. If need be, it can all be looped up and carried with the Snap Shot Carry at the same time.
When used correctly, again, it takes a degree of practice and training, but you will be more stable for a first-round hit.

There are a number of “Ching Slings” out there.

I am rather fond of Andy’s Leather Ching Slings. I own two. I also have two two-point slings. One is made by SPEC-Ops and the other made by FNH. They do allow for a more, across chest, tactical carry. I feel the two-point slings do not really add a whole lot for increased accuracy from the standing. My support arm carries all the weight of the rifle.

Even after a few minutes of trying to adjust the slings for more support, I knew my bicep was there. They do allow for more different carries, like across the back, easier. Shooting from either the sitting or prone, both slings did provide more support than no sling at all. They did require more adjustment of the length of the sling to get it just right.

I have never actually shot with a single-point sling. The few I did try out were easy to get to all parts of the rifle. But I can see where if I had to do something requiring two hands, carrying something, the rifle could get in the way or really get caught up in my legs or knees.

One thing of note that Matt in OK pointed out (thanks, Matt!) is that the materials and sound matters.

All of the slings I own, synthetic or leather, none of them make noise enough to attract attention. When I was in the Marines, prior to going to the field, we would bust out the electrical tape and tape up anything that could make noise when slapped against another object.

It seems that in the prepper community, preppers get tunnel vision on the tacti-cool stuff. Ultimately, the ability to be able to make a first-round hit comes down to the skill of the shooter themselves. The use of a sling can improve the chances of a first-round hit.

Slings are a personal choice. What may work well for one person may not for another. Some slings are better for a particular situation. Some are worse.

Shooting only from sitting at a concrete bench, front bipod, or rear bags, at 100 yards is not going to help your shooting skills in an SHTF situation. The only way to get better at using a sling is to get out there and shoot (dry fire is not bad, either) using your sling from the standing, the sitting, and the prone. So get your butt out there and practice.

Do you have a rifle sling? What kind do you prefer? Does it improve your accuracy? Share your thoughts on slings in the comments.

1stMarineJarHead is not only a former Marine, but also a former EMT-B, Wilderness EMT (courtesy of NOLS), and volunteer firefighter.

He currently resides in the great white (i.e. snowy) Northeast with his wife and dogs. He raises chickens, rabbits, goats, occasionally hogs, cows and sometimes ducks. He grows various veggies and has a weird fondness for rutabagas. He enjoys reading, writing, cooking from scratch, making charcuterie, target shooting, and is currently expanding his woodworking skills.

9 Survival Tips For Off-Grid Living On A Bike