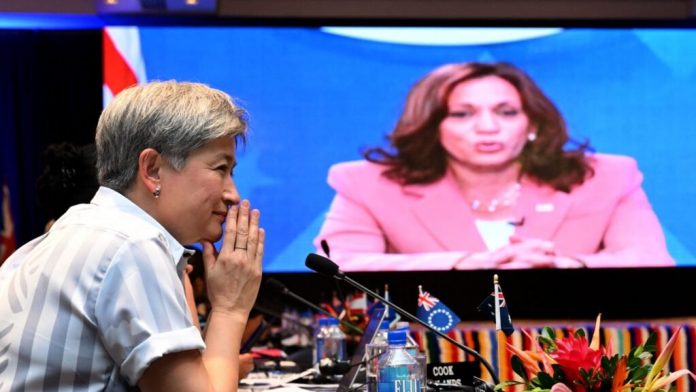 SYDNEY: After decades of benign neglect, the United States deployed Vice President Kamala Harris to the Pacific Islands to declare America is back, but an analyst said she wonders if the US is doing enough in the face of the pandemic and China’s diplomatic maneuvers in the region.

The administration told reporters in a phone call that “we’re significantly stepping up our game in the Pacific Islands.” Harris announced that the US would open two new embassies in the islands and confirmed that the embassy in the capital of the Solomon Islands, shuttered in 1993, would reopen.

“We’re expanding our footprint and making sure that we have the people and the apparatus in place to deepen our cooperation on a day-to-day basis and to deliver concrete results,” a senior administration official told reporters. The official made clear that, while the announcement was a surprise to the wider world, Pacific Islanders and their neighbors had known the new money and focus was on the way: “And these deliverables emerge from close consultations with the region in recent weeks and months, and we believe that this series of steps is responsive to their priorities.” 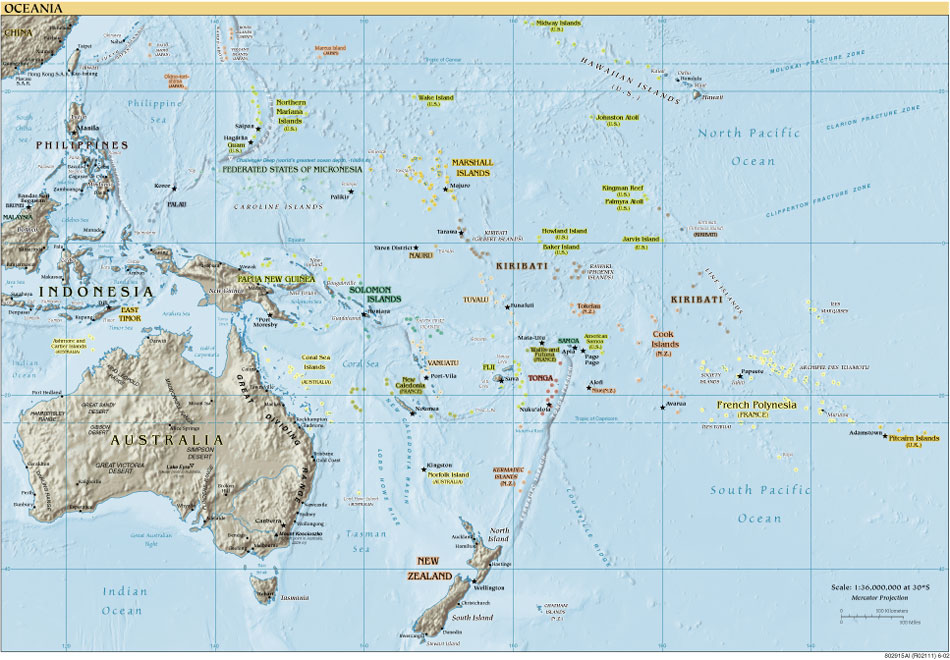 Importantly, this surprise announcement — delivered by videoconference, not in person — includes money, the strategic coin of the realm. However, it’s not a lot of money — $60 million annually over a decade. As Pentagon observers know, $60 million wouldn’t make much of a dent in even a tiny science and technology project. But, as the official noted, that would still triple US aid to the region.

A Pacific expert with Australia’s Lowy Institute, Jessica Collins, called the funding “a good start.” But independent research by Lowy, a non-partisan think tank here, estimates that the islands need at least $3.5 billion “to fully recover from the pandemic.

“So the $60 million per year will do little to contribute to that. But the US is right to not throw a big sum of money at the Pacific Islands as their first gesture of goodwill,” Collins said. “They need to establish trust first and that comes from developing personal relationships, not money.”

The new US embassies under discussion in Kiribati and Tonga, combined with the appointment of the first ambassador to the Pacific Islands Forum in Fiji may go some way to helping with those personal relationships.

Another tool to build those relationships will return to the Pacific Islands: the Peace Corps. And the US Agency for International Development (USAID) “will work toward reestablishing a regional mission in Suva, Fiji, to improve its cooperation with Pacific Island countries,” the senior official said.

Meanwhile, Kiribati’s withdrawal from the Pacific Islands Forum after it was snubbed by the other members when its turn to lead the forum came up has been cited in many news reports as a grim sign of the region’s disunity and of China’s inroads.

But Collins says that “withdrawals from the Forum are always only temporary — Kiribati’s place at the table will always be open for it to return. It will be up to the Forum members to find common ground with Kiribati, but that common ground must address in some way Kiribati’s concerns about equality and equity in the Forum.” So, while the island state was very clever in timing its withdrawal just as the most important forum meeting in many years was held, it sounds as if this really is a spat, and not a sign of fundamental discord.

And while stories circulate about the Solomon Islands accepting Chinese police gear and receiving security training from China, as well as President Manasseh Sogavare’s attendance at a graduation ceremony for Royal Solomon Islands Police Force members who had received riot control training from Chinese police earlier this month, other public signals contradict the storyline of the island nation’s lean towards Beijing.

Australian Prime Minister Anthony Albanese engaged in a very public and winning hug with Sogavare when the two men met Wednesday at the forum. The Solomons leader also met with New Zealand Prime Minister Jacinda Ardern. Sogavare repeated his pledge that there would not be any Chinese military bases in his country. 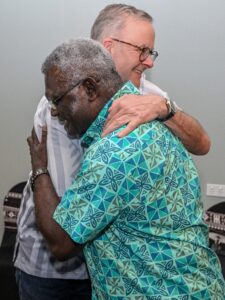 In his first interview with a foreign news outlet since the draft security pact with China leaked, he told the Guardian that Australia remains “the security partner of choice.” However, as is reasonable for the leader of a sovereign country — he did keep his options open and leave the door ajar for the Chinese: “If there is a (security) gap, we will call on support from China,” he said.

Collins of the Lowy Institute noted that Solomons might benefit from any increased competition between Australia and China. “Heightened geopolitical competition in the region is certainly an opportunity for countries like Solomon Islands to capitalise on the increased attention. There are extreme development challenges experienced in nations like Solomon Islands, and they are right to seek all the help they can get,” she said in an email. “Whether these agreements between China and Solomon Islands are meaningful is something to be seen; signing agreements is one thing, implementing them is another.”

Combined with the fact that fractures have emerged in the Pacific Islands Forum, and the Solomon Islands signing the now infamous secret security pact with China, Australia and the United States appear to have quite a bit to do.