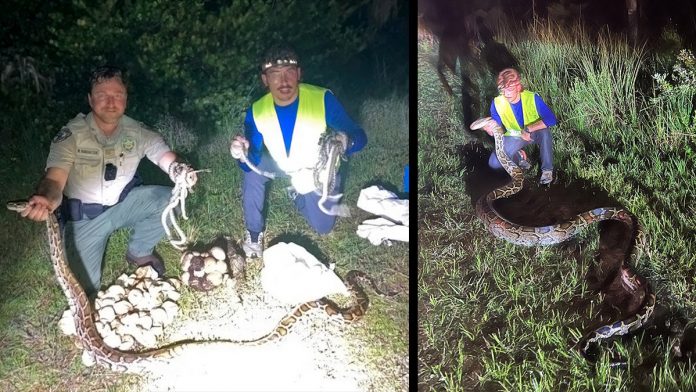 Invasive Burmese pythons are invading Florida’s waterways and impacting the famed Everglades ecosystem. The species likely gained a foothold in South Florida because of escaped or released pet snakes. The large constrictors have few natural predators and prey upon native mammal species, while also posing a danger to people. The Florida Fish and Wildlife Conservation Commission (FWC) pays professional contractors to remove pythons and also sponsors an annual Python Challenge where amateurs can compete for thousands of dollars in prizes for removing pythons from the wild.

Recently, the FWC announced the capture of two massive female Burmese pythons in Big Cypress National Preserve, which is north of Everglades National Park. On the night of July 11, python hunter Alex McDuffie found what appeared to be a freshly-hatched snake in the preserve. With the help of FWC officer Matthew Rubenstein, McDuffie then located and removed a female python on a nest that had 23 unhatched eggs and 18 additional hatchlings.

The removal effort illustrates the high reproductive rate of pythons. Female pythons can lay 50 to 100 eggs at a time. Though more than 16,000 Burmese pythons have been removed from the area since 2000, the species has still managed to expand its range to the north. On the evening of July 11, McDuffie found and removed another breeding python—a massive 17-foot, 6-incher.

Read Next: Bobcat Raids Invasive Python Nest in the Everglades

“The Florida Everglades is an iconic habitat in Florida and removing Burmese pythons from this ecosystem is critical to the survival of the species that live in this vast wild area,” said FWC Chairman Rodney Barreto in a press release touting the 2022 Florida Python Challenge, which will be held from August 5 to 14. “Under the leadership of Governor Ron DeSantis, the FWC and our dedicated partners continue to have great success conserving our native wildlife and managing this invasive predator.”

“.. two paths to hegemony—China is now pursuing both.”