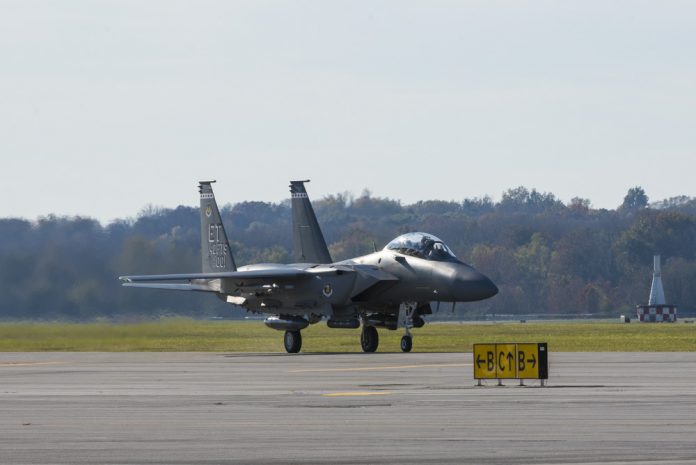 An F-15EX fighter jet taxis to its parking spot at Wright-Patterson Air Force Base, Ohio, Nov. 8, 2021. (US Air Force/Jaima Fogg)

RIAT 2022: Boeing intends to keep its next two lots of F-15EXs at or below the company’s original $80 million per unit price point despite inflationary pressures that are raising supply costs, the company’s vice president for fighters and bombers said today.

The declaration, made by Boeing’s Steve Parker in a roundtable with reporters at the Royal International Air Tattoo, stands in sharp contrast to repeated warnings about expected price jumps for another high-profile fighter program, the F-35. In that case both Defense Department and Lockheed Martin officials have telegraphed for months that Lockheed will be unable to maintain the $78 million cost per plane for an F-35A conventional takeoff and landing variant.

Parker acknowledged Boeing would “see some pressure from inflation” and has already seen “turbulence within the supply chain. However, he said, “I expect that so we’ll be on the next contract within the next couple of months for the next two lots of EXs, and it will be at the advertised price.”

“Less than $80 million,” he said. “When the contract comes out, you can check the numbers,” he said.

Moreover, despite the US Air Force’s plans to cut the F-15EX program of record from 144 to 80 planes, Parker remains confident the service will ultimately buy all 144 F-15EXs — if not more — due to the performance of the aircraft and its ability to carry oversized weapons.

“[With] the ability to be complimentary to the current fleet — whether that’s F-22, … whether it’s NGAD in the future, whether it’s F-35 or F-16 ­— the F-15 plays a critical role,” he said. “We just so believe in the value proposition of what the aircraft provides and the end capability.”

Despite Parker declaring that a contract for F-15EX lots 2 and 3 could be signed in the coming months, Boeing and the US Air Force have had difficulties in finalizing the initial F-15EX contract agreed to in 2020, which remains undefinitized. This has caused some angst amongst lawmakers, most strongly in the House Appropriations Committee, which proposed cutting six of the 24 jets the Air Force plans to buy in its fiscal 2023 defense spending proposal.

“The repeated use of UCAs [undefinitized contract action] and the delays to their definitization hinder congressional oversight by depriving the Committee of insight into accurate pricing and other contractual matters, as well as distorting program financial execution data,” the committee stated in a report accompanying the bill.

Andrew Hunter, the Air Force’s acquisition executive, told reporters last month that the lack of definitization on the F-15EX contract is just one of a “range of business issues” that the service hopes to resolve with Boeing.

“We’ve just had a hard time with some of these contract proposals, getting on the same page about: Do we actually have the information we need to move to a final contract?” he said. “We can always haggle over price, right? But we shouldn’t be at a loss because we just can’t get the right data to answer the question.”

The wonky discussion over contractual best practices coincides with larger debate about how much the US military should pay for its two newest and most advanced fighters. For years, reaching an $80 million price per jet was a major goal of the F-35 program, which was finally achieved in Lot 13 and fell to about $78 million in Lot 14.

However, Lt. Gen. Eric Fick, then the Pentagon’s F-35 program executive, told reporters in March that “it’s likely that we’ll see costs rise on a tail by tail basis” due to the impacts of COVID-19 and inflation.

Meanwhile, questions have also been raised about whether Boeing’s claim of an $80 million unit cost for the F-15EX actually passes the sniff test. In an editorial for Breaking Defense in April, John Venable of the Heritage Foundation calculated a $90 million flyaway cost for the F-15EX using figures from the Air Force’s budget, which do not take into account key mission systems like the jet’s electronic warfare suite.