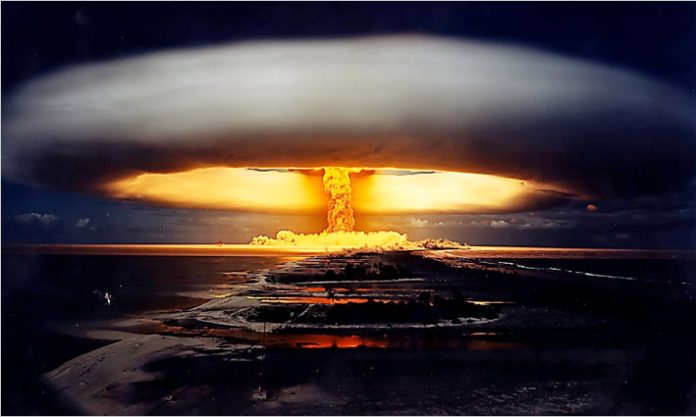 As a kid growing up in the 1980s my reading did not consist of comic books and other typical teen publications. My go to reading materials include “SURVIVE”, “AMERICAN SURVIVAL GUIDE” and “SOLDIER OF FORTUNE” magazines. My mom actually purchased a subscription to “AMERICAN SURVIVAL GUIDE” for me as a Christmas present. Back in the 1980s, the threat of nuclear war was still on the minds of many, but not all. It seemed like you had two spectrums regarding nuclear war, those that thought is was survivable and those that swallowed the Communist-backed “nuclear war isn’t survivable” propaganda line. One of the biggest propaganda pieces was the “nuclear winter” theory which has numerous fallacies that makes it “Junk Science”.

This article is based on years of both formal and informal education regarding nuclear warfare. Informal education would be the thousands of pages of information read in magazines and non-scholarly journals while the formal education includes reading books such as Herman Kahn’s “On Thermonuclear War,” and “Thinking about the Unthinkable.” In college much of my reading and writing was geared toward civil preparedness or “civil defense”. Professionally, I have read older civil defense publications, often looking for how, or why things were done in the past when it comes to civil defense. I have also attended a course at the Nevada Test site. Remember, as long as there are nuclear weapons there is a possibility they may be used. The current Eastern European situation show how quickly the threat landscape and change. I suspect that the threat landscape in the South China Sea area will change soon too.

People will die in a nuclear war, just as they have died in every previous war fought. A nuclear war will also be very destructive of our infrastructure, again just as it has been in other wars. Living in a post-nuclear war environment will not be easy but it is survivable, just like millions of people survived living in the 14th Century with none of today’s modern technology. What will make the difference in your survival are the following, proximity to a target, type of burst used on that target, your level of preparedness meaning your on-hand equipment and supplies, the level of protection your shelter will provide, your Human Resources, your collective knowledge, skills and abilities, initiative, leadership and a little divine intervention or a little luck.

How close you are to a target will be the primary factor as to whether or not you survive the immediate blast of a nuclear weapon. There isn’t a cut and dry or quick answer as to how far away you need to be from ground zero when a nuclear warhead explodes. How far you need to be away depends upon the yield of the device, the topography of the surface, and the height at which the weapon is detonated. The level of protection your shelter provides you will also influence how close you can be to a detonation. Something that most people don’t understand is the difference between a Bomb Shelter versus a fallout shelter.

The US fallout shelter program was never intended to protect people from the effects of a nuclear blast but rather just the radiation (fallout). In my assessment, it will be very difficult to survive the initial blast effects in a targeted area. Now with that said will their be people who survive, yes. Picture a round rifle target with the bullseye and the other rings. Think of the bullseye as being ground zero or the location where the weapon is actually detonated. At the bullseye, the likelihood of survival is very improbable. As you go out further from the bullseye, your chances of survival from the initial blast increase. Now, here is something that the “books” don’t normally discuss. Let’s say you are 4 “rings” out from the bullseye/ground zero. For the sake of this example let’s say that this ring equals 6 miles from ground zero. You may hunker down in the basement and “survive” the blast but what condition are you in and what condition is your home in? You could still have injuries from the blast, such as punctured eardrums. Your home could suffer structural damage like being blown over and that debris could fall into where you are sheltering in the basement thus causing some form of injury. So be very cognizant when books tell you that you can survive a particular distance away.

Survival literally means you survived that particular moment/blast. Those “survival” assessments do NOT take into account that you now must face numerous other “survival” challenges. For example at six miles out your house will likely be on fire, your house may not be structurally safe, your house may not provide the protection factor needed to protect you from the coming fallout. This is why living outside of a target area is so important. Outside of the target area will help increase the chances that you and your property escape the damages caused by the blast. Living about 20 miles outside of a target area (large city/military bases) will greatly improve you survival rates from the initial blast.

For my planning purposes, I make the assumption that a nuclear device with a yield of 1 megaton would be exploded in the city nearest to me. That is probably much larger than what would be used to target this particular city, however that is an assumption. We can see that Russian weaponry is not all that great. Poor missile design and/or poor guidance systems could bring the detonation closer to you than expected. Planning for a larger device will give you an added protection factor if the missile is off target by a few miles. The nuclear weapon that we plan for would explode as an air burst and the explosion would be to my north. The topography includes a ridge to the south of the city that is 722 feet higher than the city. That ridge should provide some level of added protection from the blast effects. The major unknown is how high will the detonation occur. The major damage from a 1 Megaton warhead would be out to about 8 to 12 miles from ground zero. Variables like type of construction and materials will also come into play as far as if structures past the 8 miles will suffer severe damage. It is very possible that windows will be blown out or cracked past the 8 mile zone, so having materials, like plywood, to board up the windows afterwords will be a good idea.

The other danger that may impact people up to the 5 mile radius is the threat of thermal burns from the flash. The flash could ignite materials out to an eight mile radius. The darker the color of the material the more likely it will be that it could catch fire. White washing windows or drawing blinds that are white may help reduce items spontaneously combusting due to the thermal heat from the detonation. The type and color of siding on your house will also influence the fire threat from the blast. What type of cloud cover at the time of the detonation will also impact how far out the dangers from thermal energy will reach.

Unlike the flawed “nuclear winter” theory assumes, most nuclear weapons will not be detonated as “surface burst”. That is exploding on the ground or very near the ground versus an “Air burst” that explodes at about 300 feet or more above the surface. There are very specific types of targets that will have surface bursts, these targets are basically military targets that are subsurface such as missile silos and command and control bunkers. Very few targets will be subject to a surface burst. Larger cities would be targeted with air burst weapons since an air burst is much more effective at destroying cities. For those living outside of the initial blast zone your immediate concerns should be the protection of the radioactive fallout that will likely affect you. (Again this depends upon where you live). Knowing how the jet stream flows from targets upwind from you will help you estimate the amounts of fallout can expect. For example, if you live in inland Oregon, there isn’t immediate targets upwind from you that will cause a significant amount of fallout compared to someone living downwind of NORAD/Cheyenne Mountain.