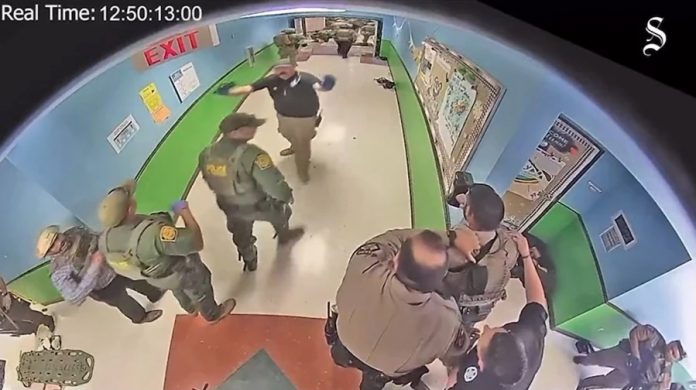 Minutes earlier he had crashed a vehicle near the school, spraying three bullets at a pair of men who approached the scene to see if he was okay. After walking into the school, AR-15 in hand, the gunman takes a right turn down a hallway. From a different hallway, a child sees the gunman. The child pauses, watches, and then jumps at a roar of gunfire. He darts away.

The scene described comes from new video footage obtained by The Statesman and KVUE News on the May 24 mass shooting in Uvalde, Texas, which left 22 people dead and 18 injured. (Editor’s note: the footage, which is embedded below, does NOT show anyone being shot.)

The 77-minute video shows that police were on the scene minutes after the shooter entered the school, but they quickly retreated after receiving a burst of gunfire. As KVUE notes, over the next hour little is done, even as more and more police arrive.

“In the video, 13 rifles can be seen arriving in the hallway in the first 30 minutes of the incident. The first shield arrives in under 20 minutes. Dozens of law enforcement officers can be seen in the hallway, along with equipment. No officers make entry into the classroom for more than 70 minutes.”

Police Have No Obligation to Protect You—and Rarely Do

The tragic events in Uvalde have naturally sparked both outcry and discussion. On good and evil. On mental health. On courage and cowardice.

Above all else, however, Uvalde has reignited the debate over gun control.

This is peculiar, because the events at Robb Elementary School actually undermined one of the key arguments used to argue for gun control.

As Richard W. Stevens pointed out in a FEE article more than two decades ago, a common—and false—belief underpins gun control ideology.

“Private citizens don’t need firearms because the police will protect them from crime,” wrote Stevens, a lawyer in Washington, D.C., and author of Dial 911 and Die.

This belief, Stevens noted, is false for two reasons. The first reason is the most obvious one, which was on full display in Uvalde. Police can’t protect everyone from crime, and rarely do. The primary purpose of police is to respond to crimes after they occur, and data suggests even this they do not do very well.

“In reality, about 11% of all serious crimes result in an arrest, and about 2% end in a conviction,” writes Shima Baughman, professor of criminal law at the University of Utah, in The Conversation.

Second, Stevens notes, the government generally and the police specifically have no legal obligation to protect people from criminal attacks in most localities. In fact, they don’t even have to show up, Stevens explains.

“It’s not just that the police cannot protect you. They don’t even have to come when you call. In most states the government and police owe no legal duty to protect individual citizens from criminal attack. The District of Columbia’s highest court spelled out plainly the ‘fundamental principle that a government and its agents are under no general duty to provide public services, such as police protection, to any particular individual citizen.’”

The “no duty” rule was established in a particularly gruesome landmark case.

“Just before dawn on March 16, 1975, two men broke down the back door of a three-story home in Washington, D.C., shared by three women and a child. On the second floor one woman was sexually attacked. Her housemates on the third floor heard her screams and called the police. The women’s first call to D.C. police got assigned a low priority, so the responding officers arrived at the house, got no answer to their knocks on the door, did a quick check around, and left. When the women frantically called the police a second time, the dispatcher promised help would come—but no officers were even dispatched. The attackers kidnapped, robbed, raped, and beat all three women over 14 hours.”

The horrifying events were made more horrifying in the legal aftermath. The victims sued the city and the police department for negligence to protect them (or even respond to the second call).

“The court held that government had no duty to respond to their call or to protect them,” Stevens writes. “Case dismissed.”

The court’s response was not unique. Most states have similar laws, Stevens notes, and some are quite explicit. A statute in Kansas precludes citizens from suing the government for negligence in police protection, while a California law states “neither a public entity nor a public employee is liable for failure to establish a police department or otherwise provide police protection service.”

The Nature of Bureaucracy

While police may not be obligated to help people in need, it’s fair to assume that most want to help people. Unfortunately, by its very nature, bureaucracy tends to frustrate the ability of police departments to effectively do so.

An example of this can also be seen in Uvalde. A New York Times description of Uvalde Police Chief Pedro Arredondo’s decision making process reveals how bureaucratic processes and red tape appear to have cost lives.

“[Arredondo] ordered the assembled officers to hold off on storming the two adjoining classrooms where the gunman had already fired more than 100 rounds at the walls, the door and the terrified fourth-graders locked inside with him, the state police said. (…)

“That appeared to be an incorrect assessment, according to the state police director, Steven McCraw: Gunfire could sporadically be heard inside the rooms, including on continuing 911 calls by the children.”

Police officers standing around debating protocols while a gunman in a nearby room executes children is both horrifying and mind-boggling to most people, but it perfectly illustrates the very real problems inherent in bureaucracies noted by economist Ludwig von Mises, who wrote about the inherent “slowness and slackness” pervasive in bureaucratic institutions.

On Tuesday, the Uvalde City Council accepted the resignation of Uvalde school district police chief Pedro Arredondo, who rightly stepped away from his position under pressure. But make no mistake: the lack of response by the Uvalde Police Department is a characteristic of bureaucracy itself, a problem that goes far beyond Arredondo’s leadership shortcomings.

The bottom line is that police usually have no obligation to protect individuals from crimes, and even if they do, they lack the ability to effectively do so. The idea that Americans can protect themselves just by calling 9-1-1 is simply not true, and the tragic events in Uvalde and countless other examples show this.

When they say you don’t need a firearm because the police will protect you, don’t believe it.

Jonathan Miltimore is the Managing Editor of FEE.org. His writing/reporting has been the subject of articles in TIME magazine, The Wall Street Journal, CNN, Forbes, Fox News, and the Star Tribune.

This article was originally published on FEE.org. Read the original article.

DO NOT RUIN THE CAPE OF YOUR DEER, ELK, Etc.

Results Are In for 2022 Rifle and Pistol CMP League Matches

Revisiting the Rule of Threes, by J.M.