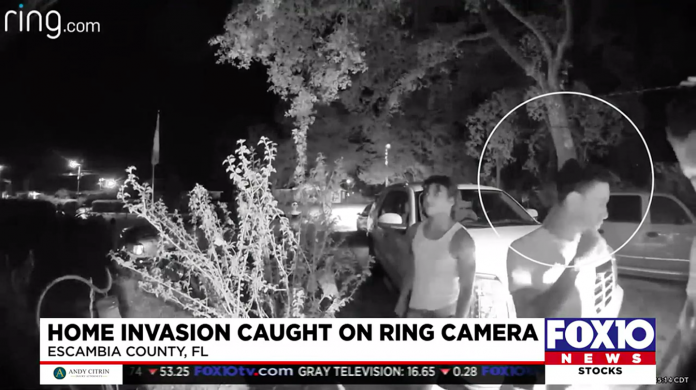 Safety tip: don’t mess with an armed Florida Man. Video captured aspiring criminals knocking on a homeowner’s door in Escambia County, Florida last week. When he opened the door, two of them pushed him back inside while a third pulled a gun. As he was being pushed, the homeowner dropped a handgun he was holding when he opened the door and one of the attackers picked it up.

That’s when the homeowner grabbed a rifle.

“The homeowner went and got an AK-47 style gun and he started shooting for his own protection to get them out of his house and to protect himself,” explained Escambia County Sheriff Chip Simmons.

Faced with a determined defender, the home invaders made a hasty retreat into the night.

Investigators are still trying to figure out who one of the guys is (they have him circled in the Ring cam). Three others have been identified:

Arrested is 20-year-old Da’Torrance Hackworth for use/display of a firearm during a felony, possession of a firearm by a felon, larceny, grand theft of a firearm, and robbery/home invasion with a firearm.

Antonio Dewayne Dean Jr., 19, is wanted for use/display of a firearm during a felony, possession of a firearm by a felon, larceny, grand theft of a firearm, and robbery/home invasion with a firearm.

Joseph Roman Sanders is wanted for home invasion with a firearm.

As for the defender firing at his attackers, Sheriff Simmons made it clear that the armed self defense situation in question happened in a home in Florida’s panhandle, not in a New York City bodega.

“So those of you who might ask the question — is the homeowner going to be charged for shooting at these people? — Absolutely not. The homeowner is protecting himself and in Florida — in Escambia County — you can protect yourself,” said Sheriff Simmons.

The Biggest Whitetail and Mule Deer Bucks of 2022