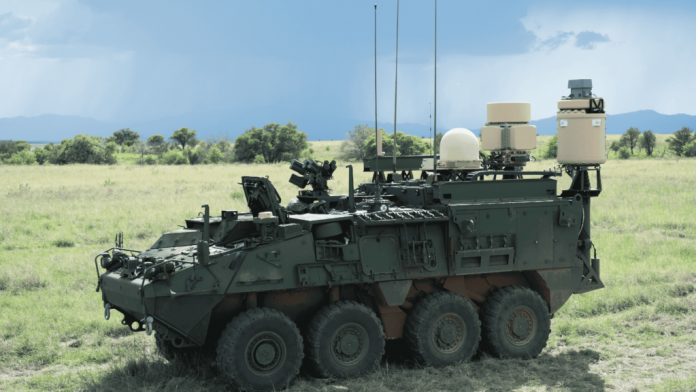 WASHINGTON: Lockheed Martin will start to deliver prototypes of a new brigade-level integrated electronic warfare and intelligence platform to the Army under a new $58.9 million contract award.

The July 13 award supports the manufacturing proof-of-concept phase for the Terrestrial Layer System-Brigade Combat Team (TLS-BCT), a suite of integrated sensors mounted onto a vehicle and designed to provide force protection and situational awareness tools, in addition to offensive EW and cyber capabilities to disrupt a targeted enemy’s systems.

According to an Army spokesperson, Lockheed Martin will build three TLS-BCT prototypes. The contract, awarded under an Other Transaction Agreement, runs through October 2023. TLS-BCT is managed by Program Executive Office for Intelligence, Electronic Warfare and Sensors.

The Army spokesperson said that an operational test is currently planned for “no later than” the fourth quarter of fiscal 2023.

In addition to the Stryker, the Army plans to integrate TLS-BCT onto the service’s new Armored Multi-Purpose Vehicles and infantry brigades. Strayer told Breaking Defense in April that the office will receive two of the early AMPVs as they come off the assembly line. He also said that the office was still deciding whether infantry brigades soldiers need a vehicle-mounted TLS-BCT or a man-packable one.

“There’s force structure growth. The Army is investing in new electronic warfare soldiers and they’re heading out to the field. They need their equipment,” Strayer said at the time.

In September, the Army chose Lockheed to move forward in the TLS-BCT competition over Digital Receiver Technology, a Boeing subsidiary. The Army’s FY23 budget request shows that the service plans to spend $88.9 million in procurement funds to purchase six more TLS-BCT systems, with a ramp up in fiscal 2024 to $201 million for 25 systems.

The Army is building a second terrestrial layer system, dubbed TLS-Echelons Above Brigade, which will give EW, signals intelligence and cyber capabilities to higher level formations like divisions and corps. It will also be employed by the Army’s Multi-Domain Task Force. That program will be delivered to its first unit in FY25.

15 Survival Items You Can Buy At Costco